The OSEE team uses Agile methods to develop OSEE. While the Agile Manifesto values individuals and interactions over tools, we have identified elements of the Agile Process that can be enhanced by the concepts embodied in OSEE.

The OSEE development team understands and uses the Agile Development Process. The Agile process is continuous – the team has a Product Owner who understands the goals for the product and keeps a backlog of items. For the OSEE team, the most convenient way to understand what needs to be done to improve or fix OSEE is to use the tool to manage its own Actions. The Action provides enough information to determine what part of OSEE the Action applies to, who initiated the Action, and the exit criteria for completion of the Action.

Development of OSEE is divided into Sprints. The Product Owner reviews the backlog Actions, and provides a groomed list of Actions to the team to include in Sprint planning. The team chooses the most important Actions and assigns story points to each candidate Action. The story points provide a way to identify the level of effort required to complete an Action. The process emphasizes team interaction, and the team buys-in to all of the actions in the Sprint because they are involved in the selection of Actions. The selected Actions are given a Goal order to suggest the order they should be addressed. The Sprint typically starts the day after the previous Sprint is completed.

Sprint progress is monitored using daily Scrum meetings. During the meeting, each developer reports progress on the Actions they are working. Anything blocking the developer from completing an Action is raised in the Scrum meeting so help can be obtained. Completed Actions are marked, and developers are assigned remaining Actions from the Sprint plan. Project metrics are collected that show how many story points are completed. The OSEE team uses a combination burn down/burn up chart that shows how far along the plan the team is and how much completed work the team has accomplished.

At the end of the Sprint, a Sprint Retrospective is used to review with the team how well the Sprint went. The Retrospective covers what went well and what didn’t with an eye to improving future Sprints. Team Velocity, a measurement of the number of story points per day per person, is collected and graphed to show how the Sprint compares to other Sprints. The Sprint Planning process repeats and the next Sprint starts.

The OSEE team utilizes its Action Tracking System (ATS) to capture and track OSEE software actions. OSEE users have the ability to submit change requests (e.g. bugzilla) describing something a user wants (e.g. a new feature or a software bug fix). These actions reside in an ordered backlog where they are evaluated and prioritized to be resolved, tested, and released appropriately using the agile software process. The OSEE product backlog consists of features, bugs, technical work, and knowledge acquisition items. Items in this backlog are sorted through a collaborative approach with users/stakeholders and planned for work.

Requirements for OSEE are an on-going process. User Stories are drawn up for each key use case. Software requirements are derived from the User stories. The intent is to identify WHAT OSEE needs to do in order to fulfill customer acceptance for a particular use case. Requirements are meant to be high level and not focused on how OSEE will accomplish each task.

The phase in the software life-cyle where the actual software is implemented for the project. This process includes: updating production software, updating test software, verifying changes through unit tests and system level tests, committing changes into version control, making local builds and submitting changes for review. 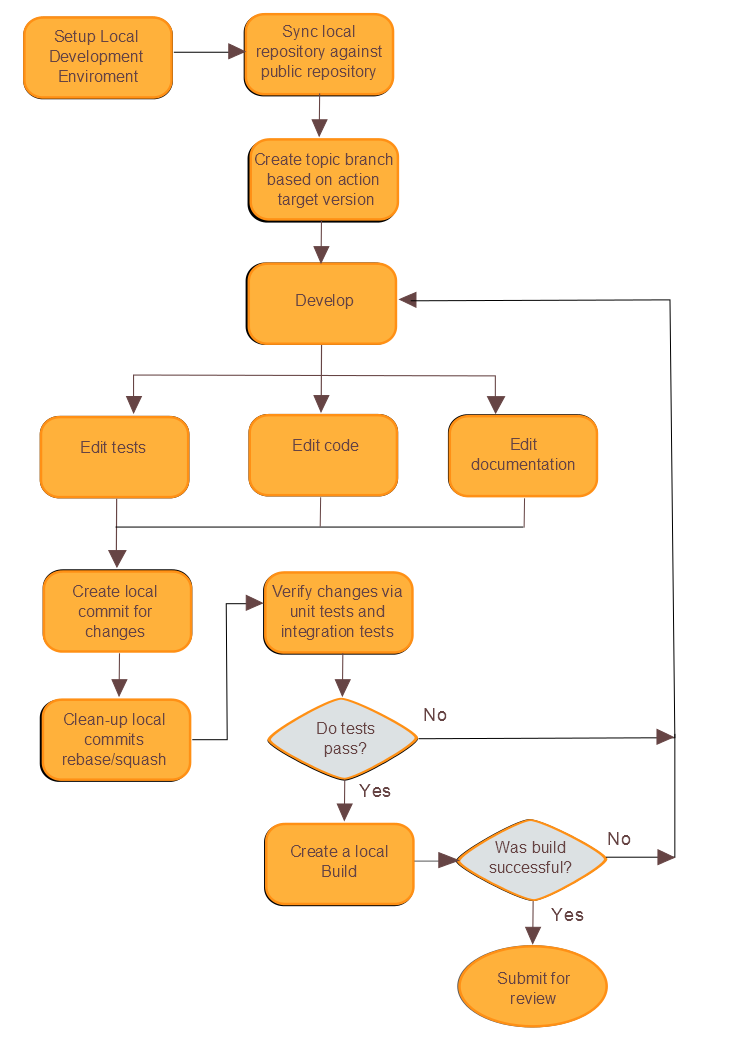 REST endpoints utilize OSGi services that are exposed through public API interfaces such as OrcsApi, DefineApi and AtsApi. Endpoints refer to the REST URLs that are available for clients such as Web, IDE and other external tools needing access to data managed in OSEE. The REST endpoints should be tested through he Integration tests such as the OseeClient_Integration_TestSuitean and AtsIde_Integration_TestSuite. These test suites use and OSEE desktop client and OSEE server and start with database initialization and population with demo data. The goal is 100% coverage of REST Endpoints paths which will also provide significant coverage of the OSGi services they utilize.

These Integration tests are very important to test the full path of an operation or many operations together. Historically, these have been our most productive in finding bugs. A good example of this is the DemoBranchRegressionTest. This tests a major set of operations that are used by anyone authoring requirements using OSEE. A requirements action is created, a branch created, changes made, branch committed, code/test workflows/tasks are generated and the workflow completed. All these operations together test a large amount of code and are very useful in finding bugs before our customers.

Server side integration JUnit test suites use an OSEE server and start with database initialization and population with demo data. These tests provide coverage of OSGi service interfaces methods missed by REST based tests.

Unit tests provide coverage missed by REST and OSGi service level testing. For unit tests, pure JUnit is preferred over JUnit plugin testing. JUnit tests do not require server, database or other services running so they can be created, run and debugged very quickly. JUnit tests are best for testing complex logic and/or where it would take a lot of work to setup all the test cases using a demo database. We do not encourage all methods to be JUnit tested. Especially things like getters/setters where it is only testing that a value can stored/retrieved. Instead complex logic like looping and for statements should be separated from UI and database constraints and tested independently.

Eclipse provides a concept of a fragment bundle. The fragment will have the same name as the host bundle with ".test" appended to it. The package structure will mirror that of the host bundle (i.e. it will not contain ".test" in any package). The test class will have the same name as the unit under test with "Test" appended. Each test method in the test class will be named testMethodName() where methodName() is the method being tested in the unit under test. Each package will contain a package test suite file that lists which classes are run as a part of that test. Within Eclipse, the Emma code coverage tool can be used for unit tests.

Note: In the past, Mockito (http://code.google.com/p/mockito/) was used. This is now discouraged due to the difficulty of debugging/fixing the tests as refactors happen. Mokito tests are used to create test mock data types. Mockito mock types can be setup to return predetermined values which can be used in assert statements to test functionality. Tests are put into a fragment bundle where the host bundle contains the code being tested.

Reviews are done using the Gerrit Code Review tool. After code has been written, it is submitted to Gerrit which allows other developers a chance to review the code prior to it being merged into a baseline branch. Information on how to configure Git to use Gerrit can be found here: [1]. Comments can be made in Gerrit in-line of the changes. After the code has been reviewed, use the “Review” button to complete the process. A -1 should be used if there are comments that need to be addressed prior to the code being merged in. A +1 should be used if the change looks good. Once two developers have reviewed the code, a committer can then review the change with +2 to merge the change into a baseline branch.

The Peer Review Checklist should be used by the developers during the code review.

Note: A review of -2 from a committer will block the change from being merged in. The IP portion of the review is for preventing unauthorized 3rd party libraries from being packaged with OSEE. If no unapproved external dependencies are included in the change, a +1 should be given by at least one reviewer. The Verified portion of the review means that the change has been successfully built (i.e. the change does not break the build). If the patch successfully builds, a +1 should be given or a -1 if the build fails.

For quality purposes, all tests are run prior to checking in code changes. Gerrit can integrate with Hudson for the Verified portion of the review, but that is currently disabled due to the time it takes to run the build and tests. Multiple integration builds are created prior to release and are used by developers to check out new functionality as well as verify prior functionality. Once a build has been used by developers, it is promoted to user acceptance. A subset of users use the new build to verify more functionality. Prior to release, all tests must pass and all changes that went into the new version are verified by doing readiness reviews. These reviews are to double-check that changes we say are in a build are actually in the build that is marked for release.

The OSEE Development process is designed to enable a change to be adequately reviewed and tested such that it could be quickly incorporated into the a next release. The releases attempt to facilitate this.

OSEE Builds and Deployment are done through Hudson. Snapshot builds are kicked off nightly and available the next morning. At anytime, an OSEE developer can select to promote an Alpha to Beta or Beta to Release by activating the promotion through Hudson.

OSEE is currently being deployed automatically to shared location.

Depending on the type of action, care must be taken to deploy to an production site.

Followup changes during and after a release