The capabilities of EGit are described in EGit/User Guide. The documentation here is complementary, it describes how the Eclipse OCL committers use EGit to satisfy typical use cases. The first of these is obviously Clone Repository. Thereafter the Major Change and Minor Change workflows cover typical developments.

The recommended workflows are governed by the following principles:

The Eclipse OCL code is maintained in a GIT repository which is used in a traditional 'client'/'server' fashion, even though GIT treats all repositories as peers. The definitive state is on the upstream 'server' at git://git.eclipse.org/gitroot/mdt/org.eclipse.ocl.git. Individual committers establish local 'client' clones of the upstream 'server' so that for committers, the definitive development stream is at origin/master and each committer's master is a branch of origin/master.

The master release branch is the development stream for the next Eclipse OCL release.

The maintenance/Rmajor_minor release branch is the maintenance stream for the Eclipse OCL major.minor.* service releases.

Very simple changes may be developed directly in a release branch. Other changes are developed in a topic branch, which has an associated Bugzilla to describe the intended change and to support communication regarding the progress of the change.

An active topic branch is named bug/xxxxxx description where xxxxx is the Bugzilla number and description is an optional description to make the Remote Tracking lists in the Repositores View more meaningful.

A completed topic branch is renamed to archive/xxxxxx.

All commit descriptions for a topic branch are prefixed by [xxxxxx]. This facilitates interpretation of the GIT history in a variety of contexts such as blame annotations, and Github networks that present just the short description.

GIT provides many locations in which distinct versions of a file may be stored. 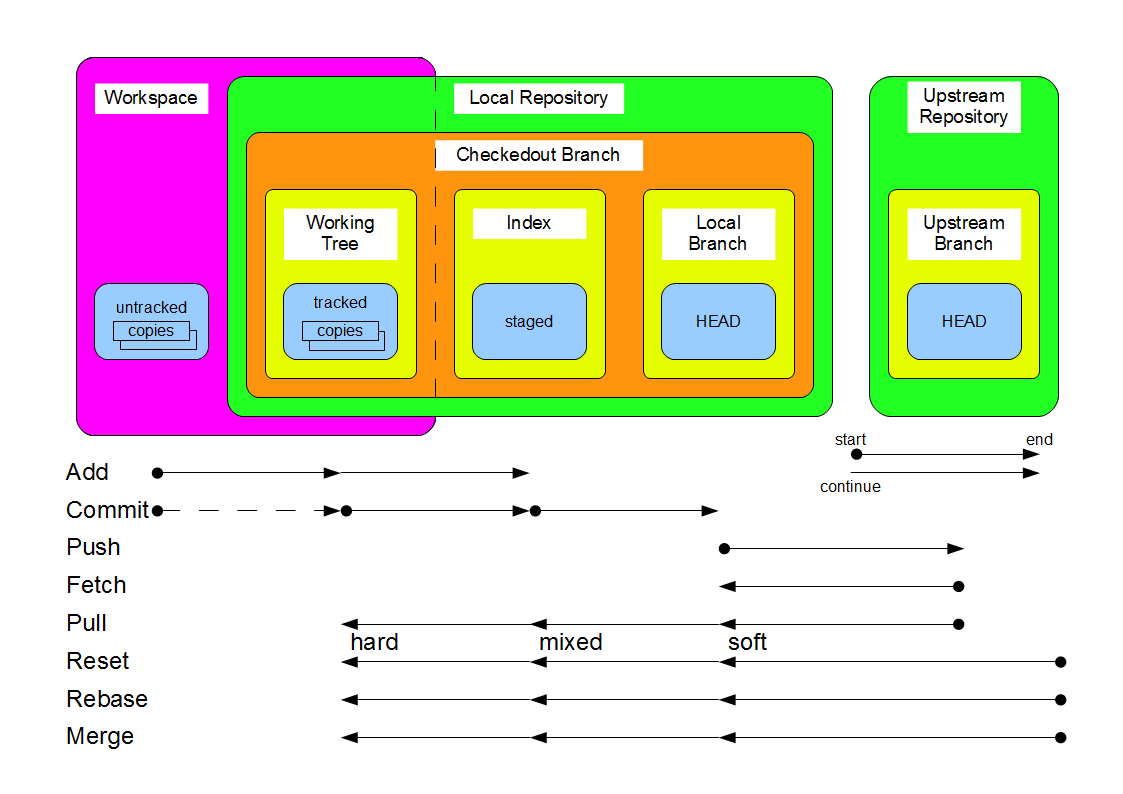 Very simple changes that do not require review, or must be performed in a hurry may be performed directly on the local master branch.

The normal evolution of the project code involves a non-trivial change that may take a few days or weeks to develop, may need review by another committer and may occur concurrently with some other change.

The change is developed in a topic branch whose name starts with bug/nnnnnn where nnnnnn is the Bugzilla number. A short description may follow.

Some changes to the master release stream may also be applied to a maintenance stream.

The Eclipse GIT repositories are accessed using SSH, so you if you want write access, you should first make sure that you have SSH keys. The Windows->Preferences->General->Network Connections->SSH2->Key Management should be adequate to install keys; a shell login to eclipse.org is not be necessary.

Then you should use the Git Repositories View of the Git Repository Exploring perspective to Create a clone of the existing Git repository accessed at ssh://committer-id@git.eclipse.org/gitroot/mdt/org.eclipse.ocl.git. committer-id is your Eclipse committer name, typically comprising the first letter of your first name followed by your last name.

Creating the clone takes quite some time, perhaps five to ten minutes, not all of which has comforting progress indications. You can use a file explorer to watch the progress. A complete directory tree for each project appears late in the cloning process.

Once you have a repository, it is recommended to Import All Projects into your workspace. The initial configuration of the Git workspace was incorrect and some projects were moved, and one of those moves inadvertently occurred one folder up. Consequently the early history has some migrations that are problematic for Git and these may incorrectly suggest that your workspace is dirty when it is not. If you have all projects imported, you should at least see what the problems are.

It is important to Fetch from Upstream regularly to ensure that concurrent changes are available in your local repository.

EGit is very reluctant to allow you to lose work, so if your current workspace currently contains some experimental changes resulting perhaps from a review or newsgroup query, you must lose these changes before you can proceed.

Changes may be thrown away by Resetting hard to match some branch, possibly the current one, possibly origin/master.

If naive builders are in use, such as Acceleo's, the reset may trigger a rebuild that makes the workspace dirty again.It may therefore be necessary to disable builds, synchronize, and overwrite the rebuilt files to lose the changes.

You may create a new local branch in order to start development of some changes. This should almost always be created from an upstream branch, since this gives a simple direct relationship to the development stream. If you use another branch such as local master you create a branch of a branch and may encounter difficulties in synchronizing changes or exporting the branch to other repositories that may not be aware of all changes in your local master.

It is recommended to configure the pull stategy to rebase so that a Pull can be used to Fetch and Rebase Branch.

If you want to continue development on a pre-existing upstream branch you should Checkout an existing branch. This creates a local branch for which the remote branch is the upstream configuration, ensuring that Fetch and Push are useful.

If you want to continue development on a pre-existing local branch you should switch to it.

On no account check out a Remote Tracking branch directly. You may succeed in committing changes locally, but they will appear to get lost since they will not be synchronized with the remote branch that you have 'changed'.

You may switch to a local topic branch in order to resume work on that topic.

You may switch to a local release branch in order to perform a very simple development directly on the release.

You should switch to a local release branch in order to merge the rebased development from a topic branch into an upstream release.

You should not normally switch to an upstream branch or tag since this creates a detached HEAD. Any changes that you make are easily lost and difficult to retrieve.

You may switch to an upstream branch to review it, but don't forget that changes will get lost.

The changes awaiting commit may be displayed by Synchronize Workspace. This activates the Synchronize View in which comparisons can be reviewed.

The changes between a current branch and another can be displayed by Synchronize. This activates the Synchronize View in which comparisons can be reviewed.

Changes are committed to the current branch. They can be committed directly from the Package Explorer view, but this offers limited opportunity for review.

It is recommended to Synchronize Workspace, so that all changes are displayed in the Synchronize View, allowing differences to be reviewed by double clicking files. The files to be committed may be selected and then committed.

Once all changes have been committed the Synchronize View should show no changes. Unfortunately the Synchronize View has limited understanding of .gitignore and so many spurious files suddenly show as needing a commit. It is currently necessary to return to the Package Explorer and resynchronize from there.

If naive builders are in use, such as Acceleo's, the commit may trigger a rebuild that then appears to show a need to commit further files. These files mark the workspace as dirty, preventing rebasing or switching. It may therefore be necessary to disable builds, resynchronize, and overwrite the rebuilt files to lose the changes.

Patches are created by selecting a commit in the History View, so select the repository in the Git Repositories View and invoke Show in History. Then select the commit from which to create a patch.

TODO: Explain how to create a patch from A to B.

Before merging a change to upstream, you should minimize the opportunities for concurrency conflicts by Fetching from Upstream to update your workspace and Rebasing onto the upstream branch.

These two actions can be achieved by a Pull if you configure your branch pull strategy to Rebase.

You cannot Rebase while your workspace has pending changes, so you must commit, or discard those before rebasing.

A simple Push to Upstream pushes all local branches upstream, which may not be what you want, so you may want to do Team->Remote->Push... to control a Direct Push.

If concurrent changes have occurred, you must rebase to resolve the concurrency conflict.

When some commits developed for one stream, such as the master release stream, are also applicable to another stream, such as a maintenance stream, the commits may be reused by cherrypicking. After switching to the branch to be updated, Cherrypick the required commits.

It is recommended to cherrypick one at a time in forward order; multiple commits can lead to spurious conflicts.

If conflicts arise they must be Resolved.

You may archive many branches at once, provided you have an up-to-date local copy of each branch ready for pushing upstream again.

For each branch to archive, first Switch to Local topic Branch or Create New local Branch and Pull to update it. Then from the EGit repositories view, Push... and add a push specification to push bug/xxxxxx as archive/xxxxxx, and another to delete bug/xxxxxx.

This upstream change only partially propagates to other repositories, for which a Fetch from Upstream will show the new archive/xxxxxx, but will not prune the old bug/xxxxxx, so branches in the Remote Tracking list may be deleted to at least remove any matches for archived branches. It is safe to delete remote tracking branches speculatively, since they will reappear with a Fetch from Upstream.