Out of this meeting, the main feature/components of an IoT Server platform would include:

The next steps for this discussion needs to be to

Following the Arc42 approach, we start with some simple context views to illustrate the surrounding actors and components an IoT server platform needs to deal with. 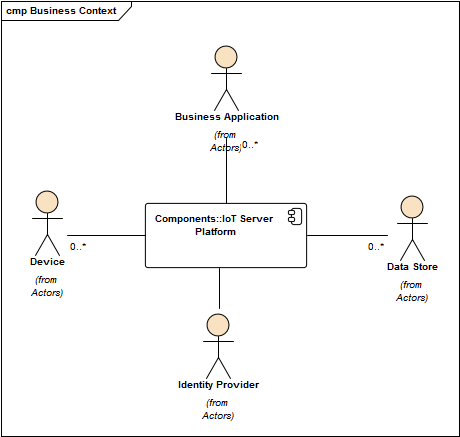 The diagram shows how multiple (potentially millions of) Devices are connected to the Iot Server Platform. The devices upload (sensor) data to the back end while the functions/services they expose can be invoked from the back end. These two directions of information flow can be characterized as follows:

Business Applications use the Iot Sever Platform as a proxy for accessing the devices' data and functionality. Applications can subscribe to particular events like notifications about data changes or device life-cycle events. This way applications do not need to deal with the technical and semantical specifics of the devices and their particular data models and communication protocols. Both of these aspects are abstracted away by the IoT Server Platform.

The data gathered from the devices can (optionally) be persisted in third party Data Stores. Arbitrary persistence strategies are possible, e.g. flat file, relational database, document store etc. The IoT Server Platform does not provide any means to store data out-of-the-box because it is expected that Business Applications will usually implement a their own, domain specific persistence layer anyways.

The top level building block view provides a white box view of the overall IoT server platform. All of its components are shown as black boxes only, i.e. at this level their internal structure is not relevant (yet) but instead the focus lies on responsibilities and relationships. If necessary, the internal structure of each of the components (the white box view) can be documented in subsequent sections, thus forming an alternating row of black box/white box views providing a drill down into the inner workings of the system.

The draft diagram below provides an overview of the (logical) components of the IoT Server Platform. As a main difference to the previous building blocks view, the former IoT Hub has been renamed to IoT Connector while at the same time its relevance for the overall architecture has been stressed out by placing it at the very center of the system, serving as the central messaging infrastructure for connecting all of the other components with each other.

Please note that the implementation of the Iot Connector is not subject of the current discussion. Instead, the focus currently should be on the IoT Connector's role, purpose and responsibilities. It might very well turn out that we end up with multiple implementations for the IoT Connector's exposed interfaces, specifically targeted at the requirements of the use case at hand, e.g. we might want to have a lightweight implementation for use cases where only a limited number of devices will be connected and only a moderate number of messages need to be exchanged whereas we would also want to have a horizontally scalable implementation targeted at cloud scenarios as well. 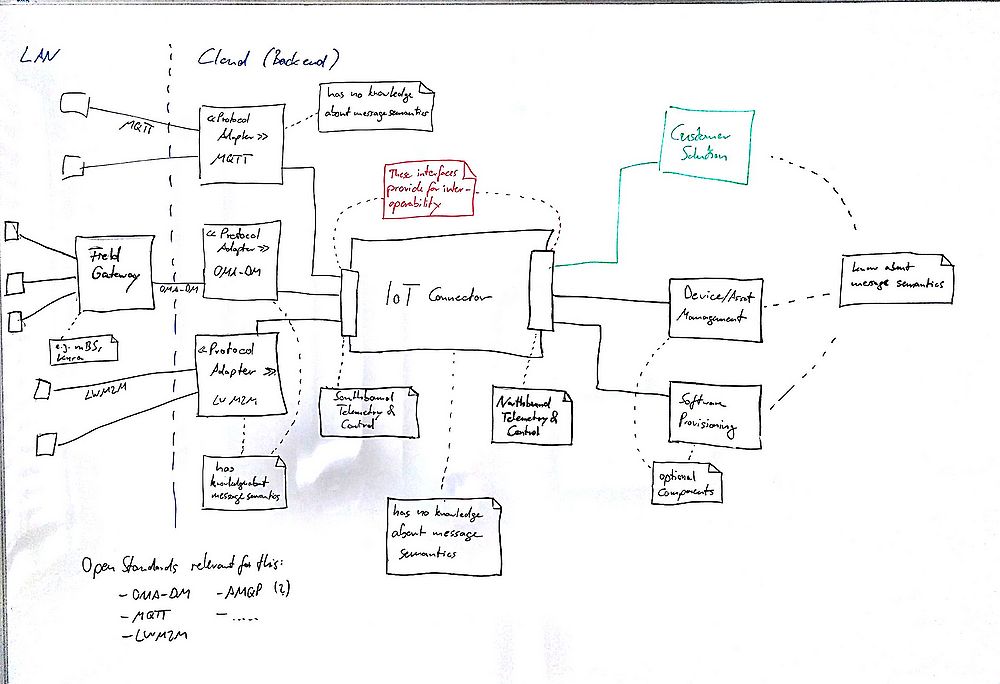 IMPORTANT
We are currently creating a proposal for starting a project to create the IoT Connector under the Eclipse IoT umbrella. You are more than welcome to contribute your thoughts & ideas to improve the proposal. We would also like to attract more people as interested parties and/or collaborators. Feel free to get in touch on the IoT Working Group mailing list or simply add your name to the proposal directly :-)

This page was last modified 10:22, 27 November 2015 by Kai Hudalla. Based on work by Scott Lewis, Benjamin CABE and Ian Skerrett.