One of the primary purpose of Intent is to allow several users (developers, architects, project managers...) to collaborate around a software design. Consequently, different users must be able to concurrently access and edit a same Document. To achieve this goal, Intent has been based on a distributed architecture, relying on the Repository concept.

Another important feature of Intent is its extension capabilities, whether it concerns the support of custom DSLs for describing model fragments, the definition of new Intent clients, the synchronization of new informations or the technology used to store and manage Intent's datas.

A distributed architecture relying on a Repository

Intent actually consists of loosely coupled components, each one of them being registered as clients of a shared Repository.

In order to wrap the concrete technology used to store the Document and manage concurrent accesses, we have defined the Repository interface.

Any Repository must provides the following features :

Many concrete technologies can be used to fulfill this contract : one can define a Repository using CDO, an other would choose to implement it using EJBs... The default implementation uses the EMF and the Eclipse Workspace.

In Intent, the Repository will be used to store the Document, as well as many other informations (compiled version of described models, traceability links, synchronization or compilations issues...).

Intent : a set of Repository clients

Intent is less a software than several softwares communicating through a shared Repository. Each clients can ask the Repository to be notified on any modifications made on precise elements. Thanks to this notification mechanism, clients will be able to communicate in order to achieve complex tasks. 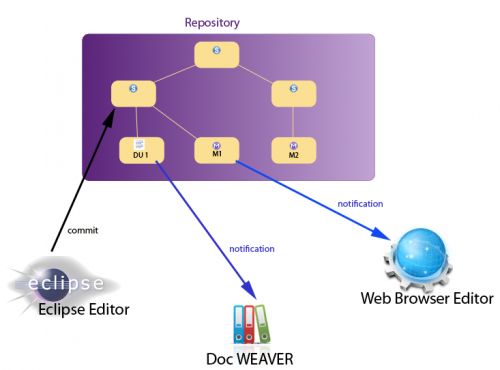 Let us quickly describe the minimal set of clients needed by Intent to work :

As the purpose of Intent is to make documentation writing as simple as possible, many Intent clients have the capability of being extended :

It is possible to easily define new clients for Intent, whether it is for providing new features needed by your customers or new ways of editing the Document. By registering your client to the Intent Repository, it will be able to react of any change made on the Document, and to therefore to communicate with the other clients.

For example, one can perfectly imagine an on-line authoring tool based on Orion or a GMF editor allowing to represent the Document as a diagram. If you have an interesting idea for a new Intent client, or specific needs that Intent does not fulfill yet, do not hesitate to contact us.

Defining your own Repository

As Intent do not rely on any technology regarding the Repository, new implementations can be easily defined, as long as they respect the Repository interface.