This project aims at providing validation of State Chart Diagrams in the graphical editor of eTrice, a project under the Eclipse Model Development Tools (MDT) intended towards implementation of the ROOM Modelling language, by providing markers for warnings and infos in these state machine diagrams (in the eTrice behavior graphical editor) and quick fixes to allow the user to pick from a list of proposals.

Basic Understanding of the Project Idea

eTrice is a project under Eclipse Model Development Tools (MDT) which provides an implementation of the ROOM modelling language in the following ways:

Q.3. What problem are we trying to address?

While making a complex ROOM State Chart Diagram for an actor in the eTrice behavior graphical editor, the user might end up in an incomplete or invalid state machine, for example, the state machine might have some unconnected parts (or) their might be some unhandled incoming messages. The user will only come to know about these problems at the time of executing the model and depending on the error, it could be quiet difficult to identify the root cause which invalidates the model.

Q.4. What solution could be provided?

To address the above problem, there is a need to provide validation of the State Chart Diagram at the time of editing the model itself, i.e Extended Model Validation.

To support the extended model validation, there exits an option to equip the protocols with semantic description defining the allowed message replies for each incoming message, the so called legal execution trees. Given these legal execution trees, an abstract state machine execution could be performed.

In the current scenario, this abstract state machine execution results in creation of warning markers in the textual model whenever a transition trigger doesn't catch a message which it should catch. Also info markers are generated at positions where a certain message is valid to send.

Q.6. What does the current idea adds?

Following things could be done in this regards :

Examples of similar implementations in other editors

This section elaborates on the details how exactly the visual feedback for warning and errors, and the list of proposals will be rendered on the diagram editor. Also, it would be discussed how the linking could be done with the problems view.

Listed below are a few images showing how some of the other projects have provided these features in their graphical editor :-


1. Here, error marks are being shown on the state:- 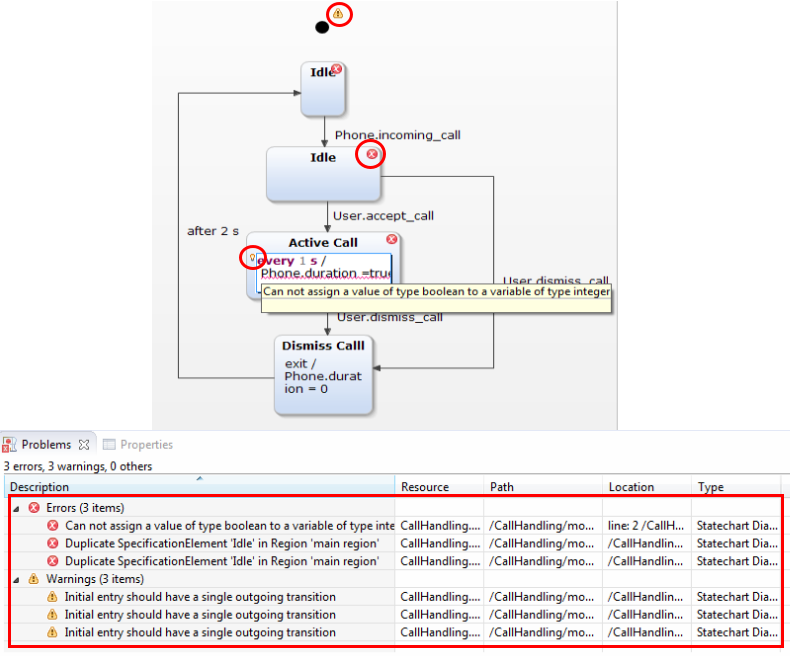 On clicking on the state with the state with error mark, it automatically open the editing dialog, along with showing the error with the state.
Also, a quick fix is present (the small bulb inside the editing box), which helps in fast correction of the error.
This could be done in eTrice for states where there are some unhandles messages. As soon as the user clicks on the state, the dialog for editing the transition could be opened and a quick fix for adding a new transition trigger could be provided.
Also this is linked with the Problems view.

2. Here the quick fix is being provided when the user double clicks on the error/warning in the problems view. The proposals are provided in a separate dialog box, on double clicking. 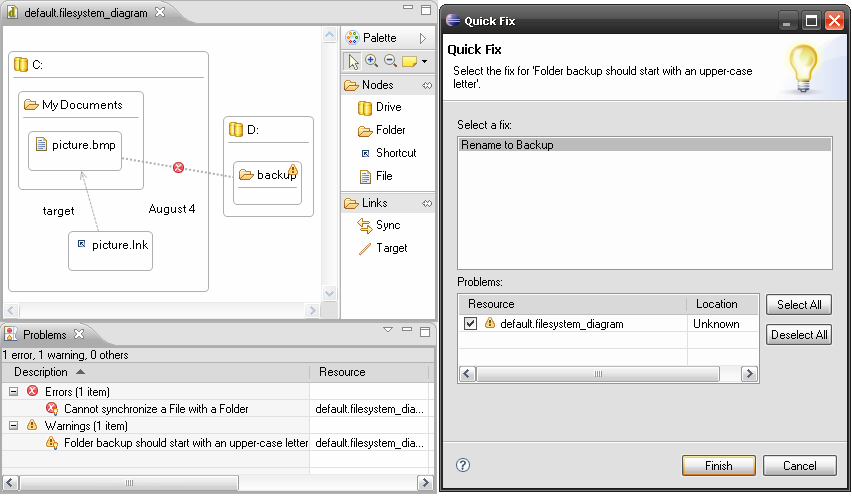 3. Here, the error markers are only listed in the problems view and a quick fix is a nearby dialog provided when the user double clicks on the state.

These are a few examples of graphical state machine editors implementing the features of validation, error markers and quick fixes. The motivation behind presenting them is to ensure that my thinking is in the correct direction. This also helps in materializing the expected deliverables.

A Possible Rendering Sequence to Adopt

Hence, one of the exact methods of rendering the features on the graphical editor could be as follows:-

The project implementation could be divided into four main phases:-

Each of the four phases will be elaborated below.

Linking the problems view with the graphical editor

This calendar is available in the following formats:

A superficial schedule of the project would be as follow:

Before 6 May: Preparing the project Wiki and improving the understanding of the implementation process.

Before the beginning (Community Bonding Period)

6 May - 26 May: Gathering the background knowledge as indicated by above sections(Background), Detailing of the schedule to make it more rigid and easily tractable.

III Phase (Linking the problems view with the graphical editor)

This page was last modified 11:27, 26 September 2014 by Jayant Gupta. Based on work by Henrik Rentz-Reichert.