EMF Compare 3.2.0 includes an _experimental_ support for Sirius diagram comparisons. All Sirius-based modelers should be supported by this, but we've notably tested this against EcoreTools for now. The goal of this support is to allow for the diagram comparisons to be displayed in their own editor instead of being shown in a default tree editor.

For example, this is what the comparison will look like for ecore diagrams: 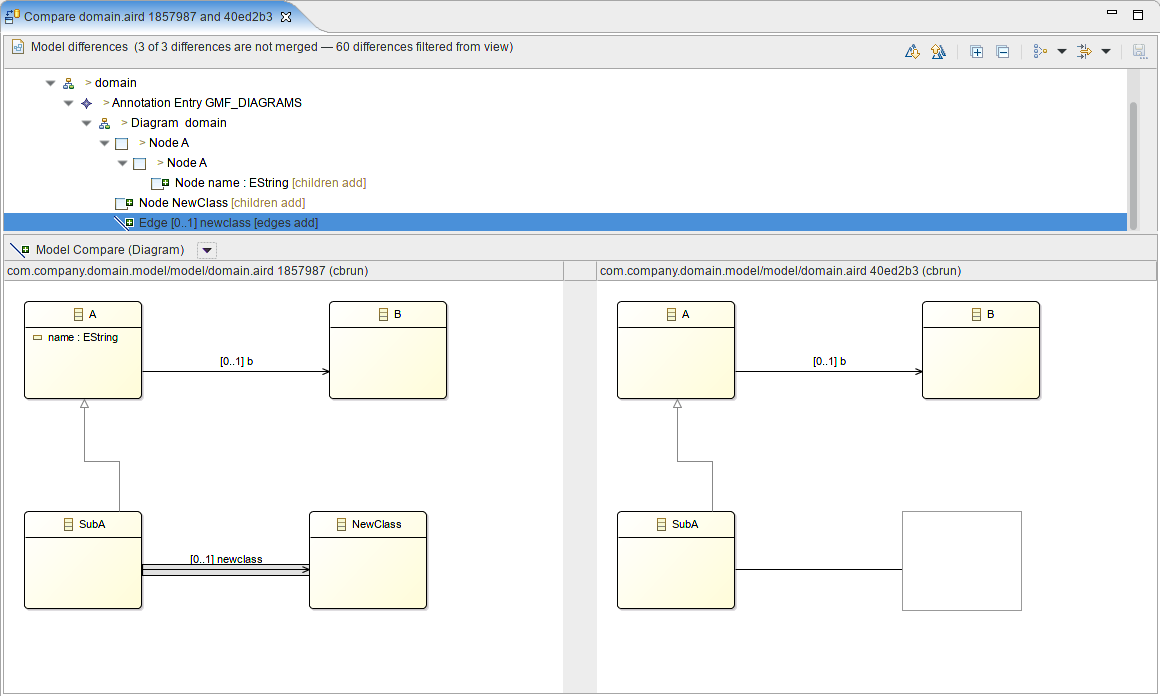 And this is what would be shown for a custom DSL (here, a family DSL): 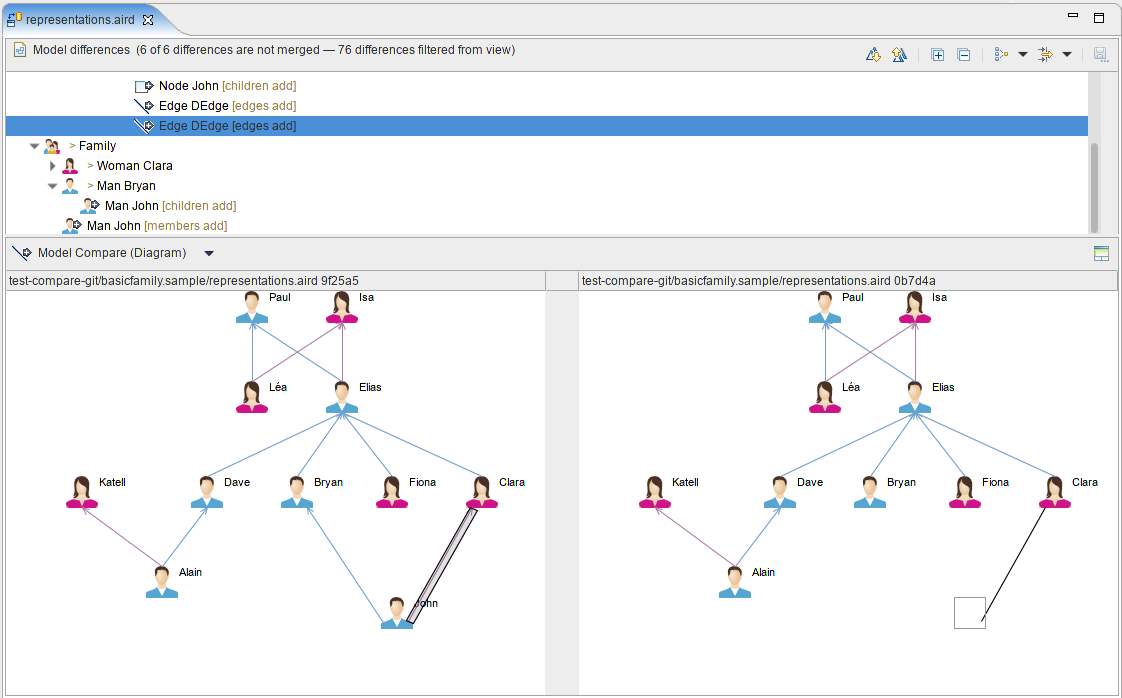 The tooltips are now contextualized. Each button has a specific tooltip for each case. The tooltip now displays the best information depending of the context. It tells exactly which object will be affected by the merge action, and which model will be modified (or not) by the merge action. 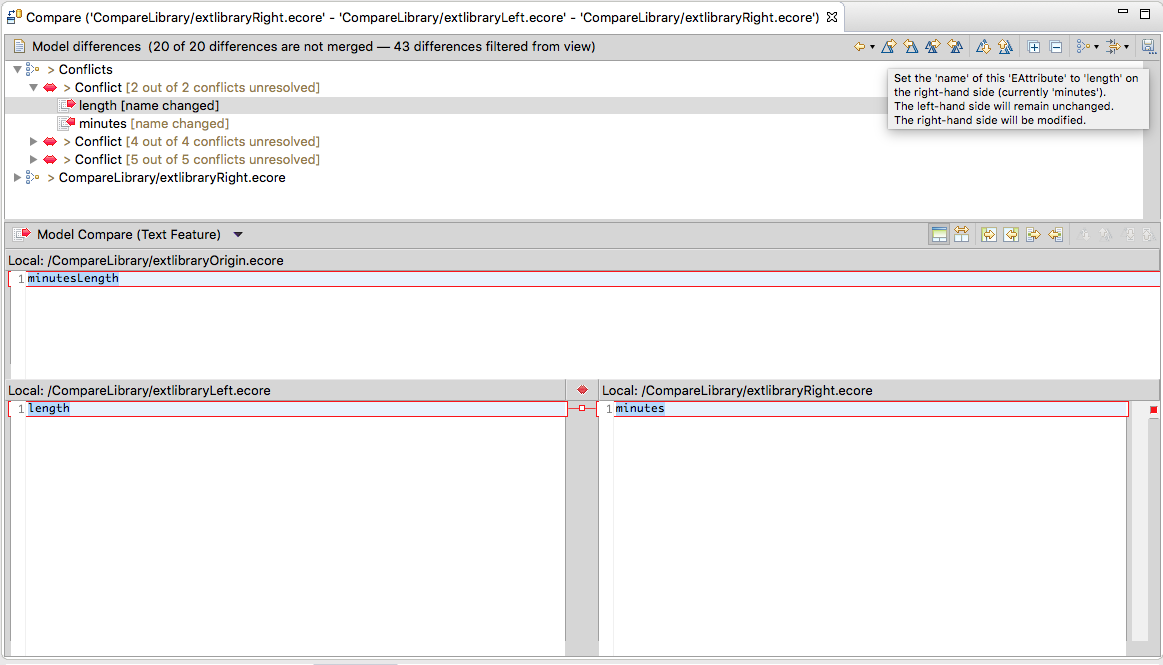 A new type of ResourceAttachmentChange have been created in the org.eclipse.emf.compare.uml2/model/uml2compare.ecore metamodel. It is DanglingStereotypeApplication. 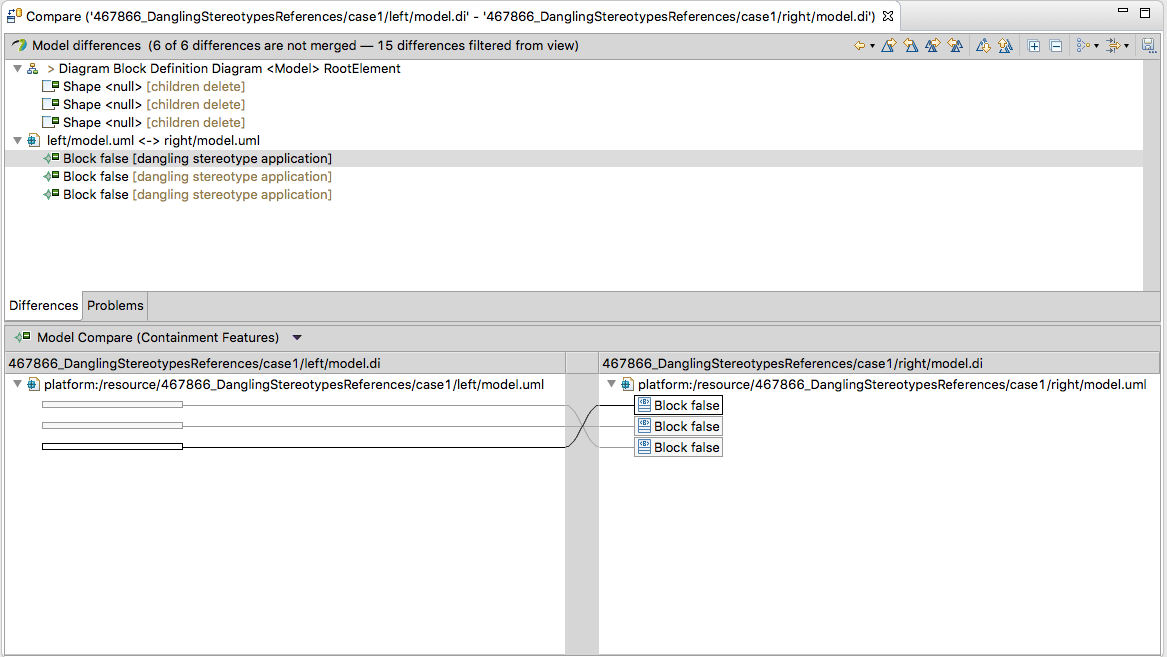 Conflict detection used to be implemented with an algorithm in O(n²), n being the number of differences.

Of course, on large models with many differences, this algorithm didn't scale properly.

Given the youth of this new conflict detector, it is not active by default. In order to use it, users must select it in: 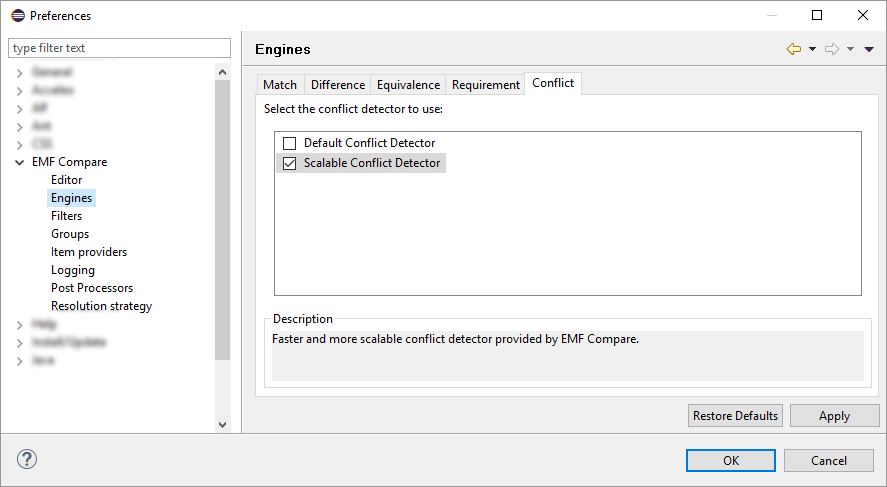 In older versions of Papyrus, additional information, such as the open tabs, are stored in the di-files of the Papyrus model. Users consequently manipulate the di-file "unconsciously" by opening or closing diagrams and may be faced with unclear and rather unimportant merge conflicts during a git merge of Papyrus models.

We now ignore remote changes of the di-file during the comparison and merge.

We introduce a post processor that removes conflicts among changes that affect model elements located in the di-file. If the user opts to include those changes in the comparison anyway, he/she still can deactivate the "Ignore Papyrus Di-files Post-Processor" in EMF Compare Preferences.

This change also implies to modify the way we handle the matching of resources. Before, when using ResourceLocationChanges to manage the renaming or move or resources, we had to be able to match 2 resources that did not have the same name or path. Now, with the use of ResourceAttachmentChange/MOVE, we don't have to artificially match 2 resources located in different places. This is especially more robust when working with git repositories, since in this case comparisons can be handled by matching resources according only to their path. When dealing with EGit, 2 resources with different paths will never be matched. This does not prevent a ResourceAttachmentChange of kind MOVE to be created, since such a change is attached to the moved root element.

IMPORTANT RESTRICTION Please note that this specification only supports moves of root nodes for EGit comparisons. Such moves will not be properly detected for local comparisons, since the paths of resources will then always be different.

However, this solution is more robust, more powerful since it allows to manage resource with several roots (which is the case of GMF notaionf resources for instance), and also more elegant since it does not break the general contract of diffs like ResourceLocationChange did.

This change is accompanied by EGit-specific and papyrus-specific classes registered through extension points:

This page was last modified 03:58, 25 May 2016 by Laurent Goubet. Based on work by Axel Richard, Laurent Delaigue and Philip Langer.