The EMF Compare Graphical User Interface (GUI) has been rethought in order to make the workflow easier for the user and reduce the possible confusion induced by the action placements.

The first visible change is that we moved the "merge" actions from the bottom pane to the very top of the comparison editor. These actions react to and operate on selections in the top panel (the structural view of the differences), which was hard to understand when they were located just above the bottom panel of the editor (which displays the content of the compared versions). This move can be seen in the following two screenshots.

Also visible in the above two screenshots is the previsualization of the impacts of a merge operation. All differences linked in one way or another with the currently selected one are highlighted in a different color depending on how they are related. In the above example, we have selected the difference on Magazine that's been made on the right side : we added Periodical as a super-type. This conflict with the removal of Periodical from the left side, highlighted in a light-red color, and depends on the fact we actually added the Magazine Class in the right side before we could add a super-type to it (highlighted in a light-green color).

This previsualization depends on the direction we are expecting to merge the difference, visible as the leftmost button in the editor's toolbar :

For example, if we are going to merge the change to pages (we added the feature pages inside a new Class Magazine on the left side), we can actually do two actions on it. We can either copy the change from the left side to the right, thus adding the pages feature to the right version, or copy it from the right to the left, thus reverting the difference in the left model, deleting the pages feature from it. Both actions have consequences, but not the same in both directions.

If we copy from the left to the right side, what we want is to "add the pages feature to the Magazine class in the right version". However, Magazine is itself a new class, so adding a feature to it requires us to also merge the addition of the class. Thus, the addition of Magazine gets highlighted when we select this direction for previsualization. 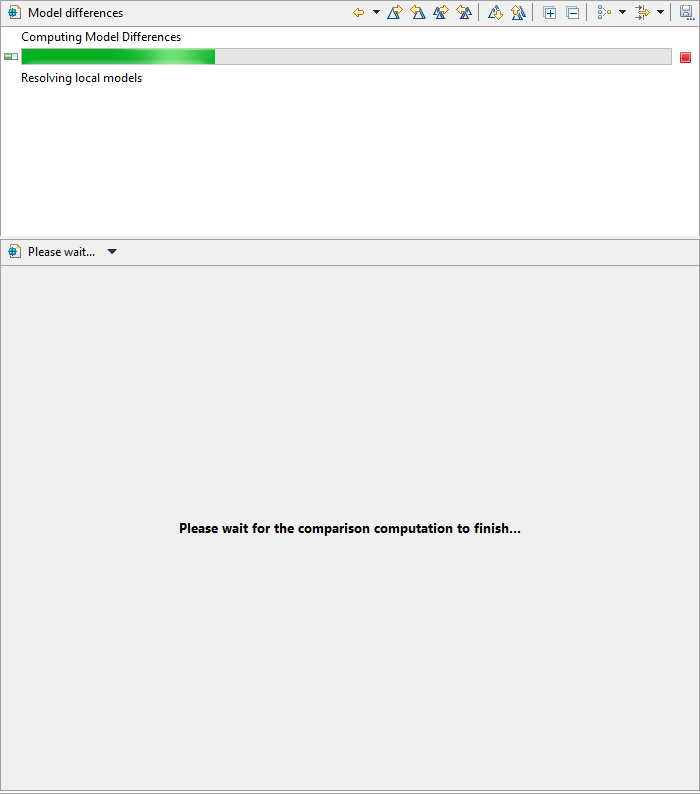