This is now a historical document. The Workbench (compatibility) layer has been included in eclipse since Juno

There are no longer any steps required to run the compatibility layer. It is now fully integrated into the Eclipse SDK 4.0 builds. Just download the latest build, and start it up like you would with any version of eclipse. See E4/Self Hosting for the current list of issues we're working on in the 4.0 Builds.

To develop or change the model in the latest builds, you need to have EMF SDK installed, plus some of the source bundles. You can also use the Advanced Workbench Model Editor from the e4 Tools.

I use the director to install the tools I need in 4.0:

A screenshot showing the current state of the e4 Eclipse 3.x compatibility layer as of 1.0M4.

This section describes how to run the e4 compatibility layer.

A screenshot showing the current state of the Eclipse 3.x compatibility layer.

This demo shows the current state of the eclipse 3.x compatibility layer . The image shows a workbench populated from an IPerspectiveFactory. The resulting menu, stacks, views and Editor Area are creating by turning the API calls into changes to the modeled UI's structure.

The views and editors are created through the LegacyViewFactory, a specialized PartFactory that mimics the part creation protocol (creating the executable extension for the part, calling 'createPartControl'...) in eclipse 3.x.

Warning: These setup instructions are significantly different from the various e4 demos because of technical constraints on fragment development.

Unlike the demos, we have to sacrifice (possibly) some stability because the current fragment handling code requires that the workspace contains a checked out org.eclipse.ui.workbench project. If the base eclipse that you are running is not recent then the workbench project may fail to compile due to underlying project changes and you could end up 'pulling on a piece of thread' (i.e. checking out multiple other projects one after the other to satisfy the compilation requirements).

Start with a fresh install of the latest I-build.

Now you should have a 'releng' project in your workspace. Drill down into 'org.eclipse.e4.ui.releng', select both 'e4.ui.psf' and 'e4.ui.compatibility.psf', right-click and select 'Import Project Set...'. This will check out the projects that you need in order to run the compatibility layer. 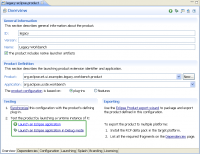 You should see a Shell similar to the one depicted above.

The first time you run the workspace will be empty, the following gestures will work to populate it with projects...

Now that you have something to work with you can 'kick the tires'. Many of the standard UI gestures (double-click to open, Ctrl-S to save) work but you may experience some that don't. The save will trigger the compiler/builder as necessary and update the problem view... Also, the '>' adornment will appear if the file is shared in CVS.

The current code is capable of performing a complete modification cycle; check out, make changes, save (w/ compile/update) and check in. We're currently working on getting the Debug part of the development workflow working; creating/launching a debug session, adding breakpoints, getting the Breakpoints and Variables views up...so far we have the Debug View working, you can add breakpoints (using the context menu in the editor) and they'll trigger when hit. In order to launch an 'inner' Debug session you should right-click in the Project Explorer and use the "Debug As >" menu.

NOTE: This is still a work in progress, many things work and many don't. To fill the gaps we'll try to give known 'working' UI gestures to accomplish various activities.

Close the e4 session if it's open Return to the 'releng' project and import e4.ui.css.psf

Re-run your e4 session, it should now be styled. The path to the CSS file can be found in /org.eclipse.e4.ui.examples.legacy.workbench/plugin.xml

Edit the file and kick the tires (it's fun...;-) ! You'll have to restart your e4 session to pick up the changes.

The bulk of the compatibility layer's implementation resides in the /org.eclipse.e4.ui.workbench.fragment project. A 'fragment' is a special type of OSGI bundle that has the ability to provide a relpacement for classes defined in some other bundle (in this case org.eclipse.ui.workbench).

What do we have and how is it done? Providing the ability to host 3.x components in the e4 workbench is a mix of three different approaches...

We expect that over time we will also have to replace some of the (possibly abstract) base classes used in the API such as ViewPart and EditorPart in order to have them integrate correctly into the e4 environment.

This page was last modified 11:10, 20 June 2014 by Paul Webster. Based on work by John Arthorne, Remy Suen and Dan Rubel and others.