A Device Emulator Framework for the Eclipse Platform

The purpose of the device emulator framework is to provide a layer on top of the Eclipse platform that makes it easier to integrate vendor specific emulators into the platform. It is expected to be used by device vendors to provide application development environments with integrated emulators.

The device emulator framework has been designed to be as flexible as possible. This means that any of the provided components can be entirely replaced by custom implementations without affecting the use of the remaining components. This is achieved by using certain design patterns and techniques that reduce component coupling, including heavy use of interfaces.

Moreover, the emulator framework has been conceived to accommodate different types of device emulators or, at least, not to preclude any type of emulator from being used in conjunction with the framework.

The device emulator framework provides a consistent set of components that follow the principles and the look-and-feel of the Eclipse platform, allowing emulator end-users to leverage their Eclipse experience.

The device emulator framework assumes that, in order to be useful to an application developer, it must be possible at least to start and stop the emulator, as well as to deploy executable code into it. The device emulator should also have some kind of output, either using an output device such as an emulated display or by performing actions on its environment. In the latter case, adapters must be able to translate those actions into something that can be displayed to the user on the Eclipse UI. Additionally, the emulator may be able to accept user input, and can have properties that the user can configure.

The emulator plug-in supports the creation of emulator instances that can be started and stopped according to user needs.

The framework provides classes that support the implementation of the following plug-in components:

The basic concepts that must underlie the architecture of the device emulator framework are described below.

The bulk of the device emulator plug-in code will be in the classes or files that define the emulator behavior, while the emulator framework is the “glue” that supports integration with the Eclipse environment.

This diagram enables us to identify the main components of the device emulator framework, namely: the property management mechanism (with a properties view that was actually implemented as a property editor to comply with Eclipse standards), the input and output system (with the corresponding views and adapters), and the launching mechanism (with UI elements and the underlying mechanism that actually starts the emulated system).

The next section discusses the design details of the actual components of the emulator framework.

This section describes the components of the device emulator framework in high level definitions with the purpose of explain better what is mean of each part of this framework and how them are connected with the other TmL components.

A device emulator is a binary distribution that contains all files required to run a specific emulator. It provides network connectivity that allows for message exchange using the protocols supported by the emulator framework as well as a framebuffer display protocol.

The first release of TmL supports the RFB (or VNC) protocol versions 3.3, 3.7 and 3.8 to be compatible with a wide array of emulators which export the framebuffer using a VNC server.

Emulator types that can be supported by the framework include:

The Emulator binaries should be encapsulated into a plug-in project to be distributed over TmL framework. This plug-in contains some configuration files describing the emulator.

Each emulator type might have one description plug-in extending TmL framework and using the extensions points available. The user will be able to create instances for these emulator if they were installed in Eclipse Platform.

Emulator instances are therefore represented as “projects” in the Eclipse Workspace. These projects are displayed in the Navigator View of the Resource Perspective, just like any other project, but they are identified by an “emulator nature” defined in the framework.

The diagram below clarifies the difference between emulator plug-ins and emulator instances in the Workspace, where the latter contain internal properties that identify them.

Each emulator plug-in provides common features such as a New Emulator Instance Wizard to create a new emulator instance, a start/stop mechanism and property edition.

This section describes the components of the device emulator framework in the order that most closely corresponds to the workflow of an emulator developer, so that it can also be used as a tutorial on how to use the framework to develop an Eclipse-integrated device emulator.

The current implementation corresponds to a very first version of the emulator framework and therefore does not contemplate more sophisticated use cases such as managing and running remote device emulators.

The New Emulator Instance Wizard is very similar to the standard Eclipse New Project Wizard, where the first page asks the user to specify the project name and location and the remaining pages ask the user for additional information.

The emulator framework allows the emulator developer to create their own New Emulator Instance Wizard. In this case, the developer must also be careful with the creation of the emulator instance project, for the latter must follow certain constraints and conditions. These are defined in the section about emulator instances. In particular, project natures must be correctly configured and the developer must ensure that the methods return valid values for the properties file and the properties path.

A emulator instance is a project and working using the project eclipse rules. To identify one emulator it is used the project nature that is a subset of tags put into .project file and used for the eclipse to identify and associate specific features to specific nature. For instance, when a java project is created , this project has java project nature and eclipse open menus and actions specific designed to work with this kind of project.

An emulator instance has an emulator nature defined in the framework and identified as org.eclipse.tml.emulator.core.emulatornature. It must also have a nature whose name corresponds to the plug-in id itself, which is required in order to associate the instance with the corresponding emulator plug-in and allow the framework to access plug-in-specific features.

If an emulator instance is created by means of a custom creation method, the developer must ensure that the two natures above are both included, and that no other natures are used. This is required by the framework.

Properties of a Device Emulator Instance

The properties file contains a list of properties for the emulator that the plug-in implements, but it does not contain the property values. 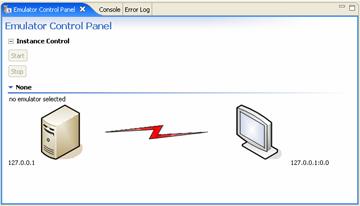 An emulator launcher is added to an emulator plug-in by means of the extension point org.eclipse.tml.emulator.launch.instance:

There are many ways in which an emulator can display its output and receive its input. The emulator framework uses an independent component that implements an RFB (also known as VNC) client.

The RFB client component is independent from the emulator framework, which means it can be used for totally different purposes. It comprises an SWT viewer that displays the pixels received by the underlying RFB client, which is capable of communicating with any standard RFB server.

The current implementation of the RFB client is based on a subset of version 3.3 of the RFB protocol. The emulator framework provides some pieces to integrate the RFB viewer to an emulator plug-in.

This component implements a RFB protocol in the versions 3.3, 3.7 and 3.8 and allows the emulator redirect the framebuffer output using a VNC connection. 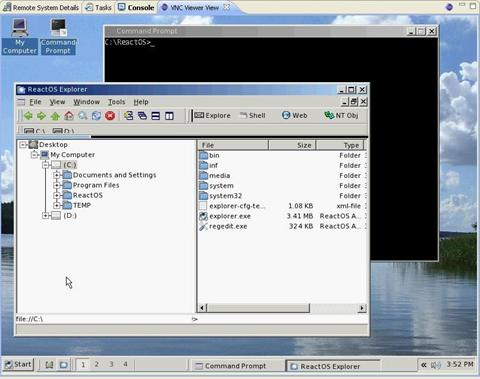 Figure 4 - Interface between instances and viewer

The Figure 4 shows one of the flows possible to display the output of frame buffer using the VNC Viewer component. The first implementation support just RFB protocol and it already has support to send messages related to mouse and keyboard events.

The future releases this component will be extending to support skins and keyboard mapping capabilities. The Figure 5 shows one example of how this viewer could be used in the future implementations.