This document will introduce you to the automatic build of stub projects.

What are stub projects

Corona "Stub" projects contain libraries which are still waiting for eclipse IP approval, hence cannot be found in our CVS repository. If you'll get such project it will not compile because of lack of required jar files. 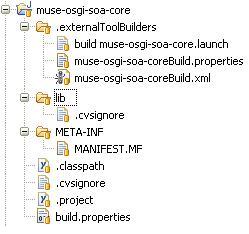 All automatic build files can be found in int <plug-in name>/.externalToolBuilders directory. Additionally there are some special entries in .project file which is located in the root of the plug-in.

How it's started (.project file)

The automatic build process is launched thanks to some modifications done in .project file, located in the root directory of the project. This file is a standard eclipse file describing the project you're working on.
To add new build script to project we had to modify the <buildSpec> section and add there new <buildCommand> part.
Below example shows new part added to org.apache.axis2 .project file:

That section defines external build tool to be launched during the build, it specifies the launch file which starts the custom build process part.

Launch file, describes what and how should be started before the real build process begins. The launch file is located in .externalToolBuilders folder and it's called build <last part of plugin name>.launch.
Below you can find the description of the most important attributes of build axis2.launch file:

Ant build script performs all tasks which has to be done before the real plug-in's build process begins. The script in is named <last part of plugin name>Build.xml and it contains two major parts (tasks):

A diagram below shows an overall idea of automatic build script process: 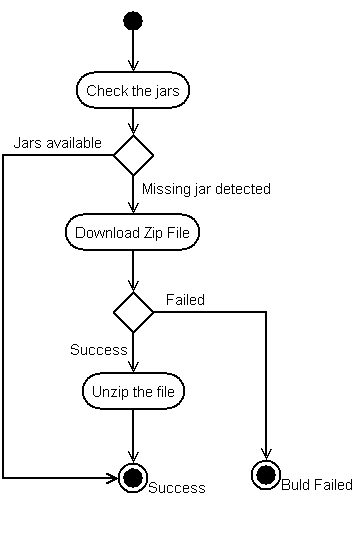 The build properties file is located in .externalToolBuilders directory and it's called <last part of plugin name>Build.properties. It contains 3 major sections:

Configuration of the automatic build

You may encounter problems with downloading zip files. The usually the problem is related to your proxy settings. If you require a proxy you have to specify following properties:

You can specify these values by one of two methods listed below:

If you don't want the project to download the Jar files, you can disable the build by setting following property:

You can specify the value in (one of):

If you want to add new jar file to the project, you'll have to perform following steps:

Removing the Jar from the lib directory

If you'll have to remove the jar file from the lib directory, you'll need to perform following steps:

This page was last modified 17:31, 24 November 2006 by Glenn Everitt. Based on work by Marcin Okraszewski and Piotr Jaworowski.