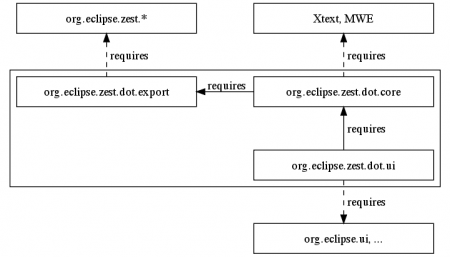 To run the current work in progress code, check out the bundles from the CVS repository above in Eclipse 3.4 (Ganymede). Besides the Zest and JET features (which are available from the Ganymede update site), you will need to install the oAW 4.3.1 Graphviz feature from the oAW update site at http://oawbranch.pluginbuilder.org/releases/p2-updateSite/.

Run the *Suite.java test suites of the individual bundles (in src-test/) as JUnit tests to get an impression of the current implementation state.

Milestone 3 adds a Zest wizard for Graphviz import (Bug 277399) that generates a new Zest graph implementation class (which supports DOT export), based on customizable DOT templates or direct input in the wizard.

Milestone 2 adds basic Graphviz export for Zest (Bug 277398) by generating a DOT file or string from a Zest graph instance: