Difference between revisions of "Xcore"

Modeling for Programmers and Programming for Modelers 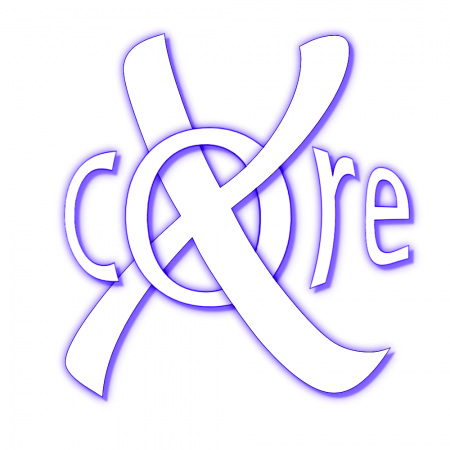 Xcore is an extended concrete syntax for Ecore that, in combination with Xbase, transforms it into a fully fledged programming language with high quality tools reminiscent of the Java Development Tools. You can use it not only to specify the structure of your model, but also the behavior of your operations and the conversion logic of your data types. It eliminates the dividing line between modeling and programming, combining the advantages of each. All this is supported for both generated and dynamic models.

The first version of Xcore will be part of the Juno release train and is currently available in the Juno p2 repository. To get started, you'll need to install the hardware-appropriate platform version of Eclipse 4.2 or Eclipse 3.8. Once you have that installed and running, you're ready to install Xcore.

Xcore and everything it needs will be automatically installed. Of course you'll need to restart Eclipse for the changes to property take effect.

Xcore can be used in any properly-configured Java project. There's a convenient wizard for creating an empty pre-configured project.

In your workspace you'll see your new project.

It's a project with a Java, PDE, and Xtext natures that contains the following:

Of course it's possible to start with any Java project and use the "Convert → Add Xtext Nature" or "Convert → Convert to Plug-in Projects to introduce the missing natures and to edit the MANIFEST.MF to add missing dependencies.

An Xcore model is created in the "model" folder via its context menu using "New → File" to create an empty new file with extension ".xcore", e.g., "Company.xcore". This will open the Xcore-aware editor. It starts out with an error marker, because an empty file isn't a valid Xcore instance.

The editor supports syntax completion so if you enter Ctrl-Space, you'll see it fills in the "package" keyword. Next you need to enter a package name, e.g., org.example.company. If you save, you'll see the error markers go away. You've created an empty Xcore package. As you can see, like Java, an Xcore model starts with a package declaration but note that that there's no semicolon. Note too that nothing is generated in the "src-gen" folder yet; EMF doesn't generate anything for empty packages.

Now you're ready to create something more meaningful. Add two blank lines and try hitting Ctrl-Space again to see what you're allowed to enter next. 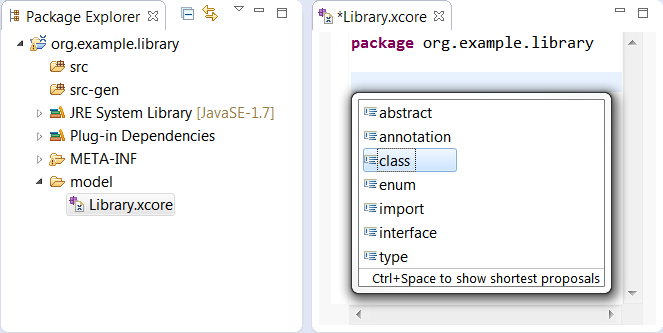 We'll start by defining a class called "Library". After entering the "class" keyword and the name of the class, type a curly brace: the closing curly brace is automatically inserted. If you now save the editor, you'll see the following:

Noticed that the model code has been generated automatically.

Now you're ready to define the structure of the "Library" class. Within the curly braces, hit Ctrl-Space to see what you're allowed to enter next.

To specify an attribute, you need to specify the name of a data type followed by the name of the feature. So if you choose "String", enter "name", and save, you'll see the following:

Of course the corresponding feature accessor methods, i.e., getName() and setName(String), will immediately be generated in the "Library" interface. Note that while the Xcore source shows the use of "String", which in the completion proposal you saw earlier was listed as "java.lang.String", from the hover information you can see that the reference actually resolves to the "EString" data type from the built-in "Ecore" package. Xcore provides familiar aliases for all of the Ecore data types that correspond to Java built-in and mathematical types.

We'll want libraries to contain books and authors, so let's add two more empty classes, "Book" and "Writer" so that we can specify references to them in the library. If we try the same approach as defining the name feature, you'll end up with the following:

That's because Xcore interprets this as an attribute and the type of an attribute must be a data type, not a class. If you hover over the error indicator, you'll see how to fix the problem.

In this case, we want to define a containment reference, so choose that option. Notice that if you select the reference to "Book" you can use "F3" to navigate to the definition for the "Book" class. Of course we wanted to define this to be a multi-valued reference and here have specified a single-valued reference. The multiplicity of a feature is specified with the bounds in square brackets, where "[]" is used as a short-hand for "[0..*]" as follows:

Let's define another multi-valued containment reference called "authors" and save the result, which will look as follows:

Again, the expected results are immediately generated. Notice that the outline view uses icons are much like the GenModel's icons, though with a purplish cast rather than a bluish one.

If you wanted a convenient API for navigating from a "Book" or "Writer" to its containing "Library" you'd specify container reference with an opposite like this:

Notice that completion support is available for specifying the opposite. When you select a choice, the opposite is automatically updated to refer back.

Note how we've made use of "int" as an alias for "EInt" to define the type for "pages".

The most important thing left to complete the picture is specifying the bidirectional relationship between "Books" and "Writers". Specifying a cross reference is done much like we did for containment and container references, but using the "refers" keyword. We start by specifying one of the two references, i.e, a "Book" has "authors", then the other, i.e., a "Writer" has "books", at which point we can also specify the opposite.

Notice that opposite completion is supported here as well and that upon completion, both opposites are properly paired.

Of course "F3" navigation is supported for the reference to an opposite.

Supposed we wanted to categorize the kinds of books we have in the library. We could specify an enumeration named "BookCategory" for that and use it to specify a feature named "bookCategory" in "Book" as follows:

Suppose we wanted to specify the copyright date of a book. Of course we could use "EDate" from Ecore, but its serialization format is more like date and time, so that might not exactly fit our needs. Instead we could define our own "Date" data type to wrap "java.util.Date" as follows:

A data type acts as a wrapper for an existing Java type, so the completion proposal supports choosing a Java class that matches the name we've started typing. Upon selection, an import is added, so we can use the short form of the name.

Because classifier names and Java type names can never be used interchangeably in any Xcore scope, it's not a conflict to import the Java name in a scope that also defines a classifier with the same name.

So far everything we've shown are things you could do with Ecore directly, so we've only seen how Xcore provides a concise textual syntax for Ecore. To complete the support for our own "Date" type, it would normally be necessary to modify the generated "LibraryFactoryImpl" class' methods that implement string conversion for this data type. With Xcore, we can specify this logic directly in the model. Note that if we look at the proposals for what may follow the type specification, we can see that the "create" and "convert" keywords are expected.

So we can choose to start specifying the "create" logic for creating an instance of the data type from a "String" value which is specifying within the curly braces of a block. We can using Java's "java.text.SimpleDateFormat" class as follows:

Notice that completion proposals understand what's on the classpath so we can use that for calling the constructor. To refer to the instance of the data type within the body we use "it", which acts much like the implicit "this" variable in Java. We also need to consider that "parse" can throw a "ParseException" that we need to handle properly. In addition, the value of the data type might be null, so best we guard for that case too. And finally, we can use a similar approach to specify the "convert" logic to produce the following complete result:

Notice we've also used the new data type to define a "copyright" features in the "Book" class and that all the Java classes we've used were automatically imported by completion. The notation for expressing behavior in Xcore uses the model defined by Xbase. It's very similar to Java, but is expression oriented, so even things that are statements in Java, return a value in Xcore/Xbase. That's why you don't see a "return" statement.

Suppose you wanted convenience methods on Library, e.g., an operation to retrieve a "Book" give its title. We could specify that as follows:

Again, the syntax is very Java-like and of course completion proposals are aware of the Java APIs implied by the Xcore model definition so feature names such as "books" are in the proposals. Here's how we would complete the definition:

We return "null" if we reach the end of the loop without a match. That's all there is to it. If you look at the generated implementation class for "Library" you'll see it compiles to the following Java code:

Notice that the "==" comparison for title is compiled to a null safe "Object.equals" test. Notice also that all the things that look like simple field accesses in the Xcore code actually compile down to proper calls to the generated API accessor methods. One of the nice things about Xcore is that you get the advantages of writing what look like simple Java classes with simple fields declarations, including the ability to write a notation as if you had simple fields, but you end up with properly defined APIs and proper uses of them.