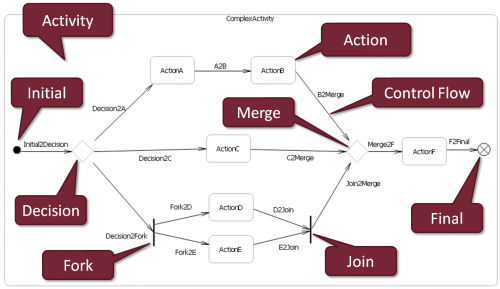 An Activity is the model of the process, represented in an Activity Diagram (AD) by a large box containing nodes and edges. An activity consists of several action nodes (also called executable nodes, more precisely opaque actions), denoted by smaller rounded blocks; each represent some action that is performed for some time during this process. We will only be interested in the most common kind of activity edges: control flow edges connect actions to define their sequence of execution. This sequence starts at the initial node, and terminates at the flow final node. These two are not actual actions, but special control nodes. 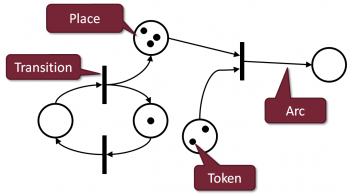 Illustration of a graph pattern, consisting of a control flow element and the place corresponding to it.

Specifying graph transformation rules requires specifying patterns. Our first pattern expresses a control flow element that has already been mapped into the Petri Net domain. Thus the pattern consists of a control flow element from a UML Activity, the Petri Net place corresponding to it, and a special traceability link between them. Such links will be useful later as they help to remember which Petri Net node corresponds to which UML model element, preserving a mapping between source and target models, thereby achieving traceability.

The visual illustration of this pattern looks admittedly strange, as the traceability link connects to the control flow element, which is an edge. It is good to remember that for this and similar purposes, VIATRA2 models tolerate edges (relations) connecting to other edges. Furthermore in this case, the control flow element is actually a node in the abstract UML model, despite being denoted by an edge on the Activity Diagram. It is useful to keep in mind that transformations always operate on the abstract syntax, from which the concrete syntax may differ significantly. As a further deviation from the visual illustration of this pattern, we actually constructed the pattern with an additional node for the Petri Net itself, and an edge that identifies the place as belonging to this net. While not apparent right now, this addition will be useful later.

The three pattern variables are ControlFlow, PetriPlace, and PetriNet; they are intended to be mapped onto the control flow element, the place in the Petri Net, and the net itself, respectively.

The pattern imposes three constraints on these variables. The first one identifies the variable ControlFlow to be an entity of the type also called ControlFlow. Normally, only variable names are capitalized. As the name of the type starts with a capital letter, it has to be enclosed in single apostrophes to mark it as the name of a (meta)model element, as opposed to the name of a variable. The second constraint identifies an "activityEdgeMapping" between the activity edge (ControlFlow) and its image in the target model (PetriPlace); this is the part of the pattern that finds the traceability link. Finally, asserting "placeOfNet" ensures that PetriPlace is a place, PetriNet is a net, and the former is contained in the latter.

How does this single line assert all these? Actually, "placeOfNet" is not an edge (relation) of the model (and neither is activityEdgeMapping). They are graph patterns themselves, and the find keyword indicates pattern composition (or pattern invocation), which basically means reusing a predefined pattern as part of a different pattern. This utility pattern is defined this way:

Illustration of a GT Rule for mapping Control Flow.

Now, we need to create Graph Transformation (GT) rules that map a control flow edge into a Petri place. This will be our first GT rule, and luckily it is a quite simple one.

It is possible for the control structure of the transformation program to guarantee that the GT rule is applied on each control flow element exactly once. Yet, it is often a good idea to formulate GT rules in such a way that it is immediately apparent that they cannot be applied on the same spot repeatedly. Here we achieve this by a so-called Negative Application Condition (NAC). A NAC is an extra constraint attached on the LHS pattern that, when satisfied, will invalidate a match of the pattern. NACs can also be described as graph patterns. In our case, the NAC pattern consists of the same control flow element already having a traceability link. Since it is a negative condition, the LHS will only match control flow elements that have not already been mapped into.