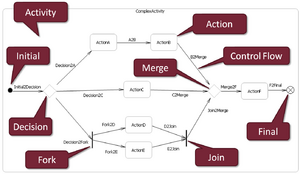 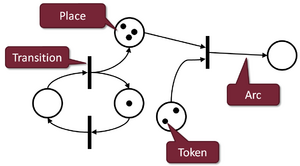 We interpret UML Activity semantics in a way such that executing and Action is not instantaneous, but can last for some time. Also, there is no obligation for an Action to start as soon as the previous one in the sequence is finished, some time can pass in-between. Thus for each Action, the resulting Petri Net should have one or more states where the Action is being executed. Likewise for each control flow edge, there should be PN states where the edge is active, i.e. execution has passed the Action (or Control Node) at the source of the Control Flow edge, but has not yet reached the Activity Node at the target of the edge.

This goal can be achieved by creating a Petri place for each Action and each Control Flow in the Activity model. In the marking belonging to a state of the Petri net, a token in the place corresponding to an Action means that an instance of the process is currently executing the Action. Similarly, a token in the place corresponding to a Control Flow means that the activity edge is currently active.