pomfirst-bundle is a simple project with packaging=jar that uses maven-bundle-plugin:manifest goal to generate bundle manifest based on sources of the project and their external dependencies, plexus-utils in this particular example.

pomfirst-thirdparty does not have any sources itself, but "wraps" thirdparty library available from maven repository in an OSGi bundle.

You can read more about maven-bundle-plugin here, but important point to note, this is not a tycho project. Artifacts installed into local repository have correct OSGi bundle manifest, but does not have any tycho or p2 specific information.

This will build and install tycho.demo.itp02:pomfirst-bundle:1.0.0-SNAPSHOT into Maven local repository. The build is expected to succeed.

This will build both build02 modules and the build is expected to succeed.

What happens under the hood

There are two "interesting" elements in build02/pom.xml.

First, there is dependency on the pom-first project Note: The dependencies that the target platform will consider are the ones defined in the pom.xml that specifies the target-platform-configuration. Your bundles should not have any Maven dependencies since OSGi dependencies are specified Manifest-First in MANIFEST.MF as Import-Package (or Require-Bundle).

pomDependencies=consider tells tycho target platform resolver (p2-based in this example) to consider <dependencies/> element. In case of p2-based TP resolver, this is a multistep process 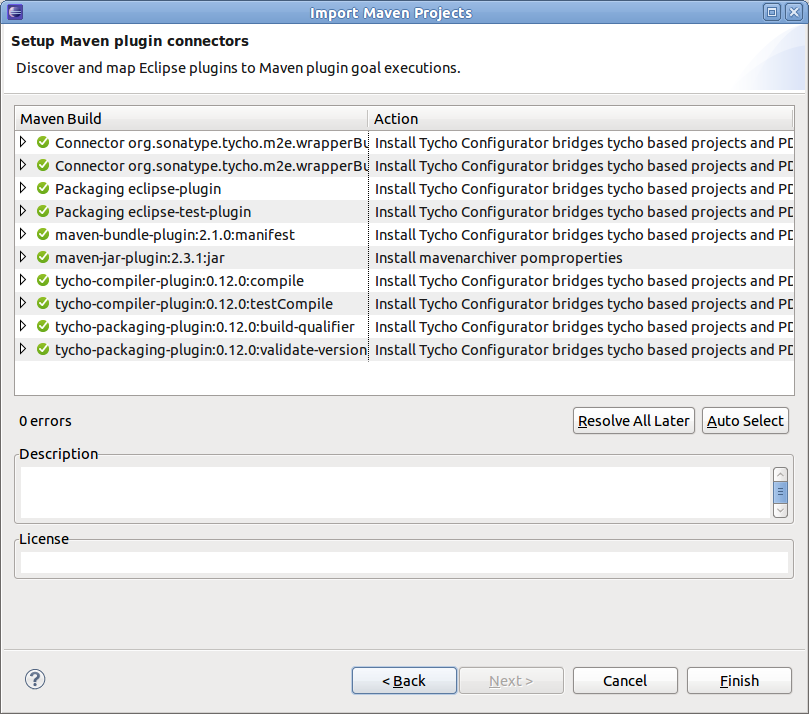 Allow installation of m2eclipse-tycho and confirm workspace restart when prompted.

Upon workspace restart, m2e is expected to automatically complete project configuration and it should be possible to successfully run tycho.demo.itp02.bundle.tests as JUnit Plug-In Test from IDE.

It is not possible to mix pom-first and manifest-first projects in the same reactor build.

This limitation cannot be relaxed without fundamental changes to Maven build lifecycle. Currently, the only solution is to build pom-first projects separately, before building manifest-first projects.

Currently, ProjectC build will fail because pom-first are not transitive.

Workaround is to add pom-first dependency on ProjectA to ProjectC. It is likely Nexus/Pro OSGi support will provide more elegant solution to this problem sometime in the future.

No good excuses here and it should be fairly straightforward to implement. (this may have been added in 0.9.0, but the committer unfortunately did not provide integration test(s), so I can't tell for sure)