Difference between revisions of "SonarQube"

Code quality analysis helps you to make your code:

It is also a mandatory step for projects willing to enter the PolarSys Maturity Assessment, as the analysis process relies on code metrics extracted by Sonar.

Code quality analysis mainly relies on a set of tools that look at your code and give you hints. The most famous tools are Findbugs, PMD, Checkstyle; but also code coverage tools such as Jacoco. JDT itself provides very powerful quality checks, but there are not enabled by default. You should go to Error/Warnings in preferences and replace all "ignore" by "Warning". You can (and should) enable such tools in IDE.

Code quality can also be analyzed out of the IDE, running those tools and using their reports to find out the "hot spots" in your code.

Sonar is an open-source product which is used to gather several metrics about code quality, put them all in a single dashboard, and provide some tips to help you making your code better, more sustainable, more reliable, less bugged.

Enable Hudson Sonar plugin on your job or running mvn sonar:sonar on your Maven build will result in the following flow of actions:

Setting up SonarQube for Eclipse.org projects

Sonar can be found on https://dev.eclipse.org/sonar . Several projects already have quality reports enabled. You can drill-down on code to see Sonar annotations on each class, or navigate through the different widgets on the dashboard to focus on specific issues.

The project must have a Hudson instance. See how to get a dedicated HIPP. You should first setup a normal build to make sure the project compiles correctly.

Optional: it may be a good thing to add a sonar goal in your pom.xml, so you can run the sonar analyser whenever you want independently of the Hudson build.

There are two ways to setup Sonar on Hudson for your project, depending on the build tool used: Tycho builds can use the Sonar/Maven integration, while other tools (e.g. Buckminster) have to setup a SonarQube Runner build step.

You can check the SonarQube documentation for the plugin here:

Enable Sonar for your project: with Tycho

The only prerequisite for this method is to use Tycho as a building tool, which allows to automatically retrieve all information about the build and its dependencies.

A dedicated job has to be defined for the quality analysis -- because you don't want to execute Sonar everytime the project is built. In the update center, install the Sonar plugin and restart the Hudson instance. In the job configuration, check the Sonar post-build action, click on advanced and fulfill the fields according to your project configuration. The following example screenshot shows the configuration used by the emf-compare project.

Then post a new bug entry in the community bugzilla to ask an administrator to add the Eclipse Sonar instance parameters to the Sonar plugin.

Warning: Since the Hudson version 3.3.0, the configuration needs to be changed to avoid a "Could not find or load main class MAVEN_OPTS" error. For that, you can follow the workaround of comment 2 of bugzilla 474406. In summary:

Enable Sonar for your project: without Tycho

The other way to setup Sonar is to use the Sonar Build step, which executes SonarQube Runner. In this case, some information needs to be provided manually for the configuration of the Sonar analysis (in comparison with the previous section, Tycho provides this data automatically).

Setup a dedicated build job for the Sonar analysis. In the update center, install the Sonar plugin and restart the Hudson instance. Check that the plugin is correctly installed:

Then post a new bug entry in the community bugzilla to ask an administrator to setup the SonarRunner plugin.

Check that the plugin is installed and the SonarRunner section configured:

Check that the Sonar server section is correctly configured: 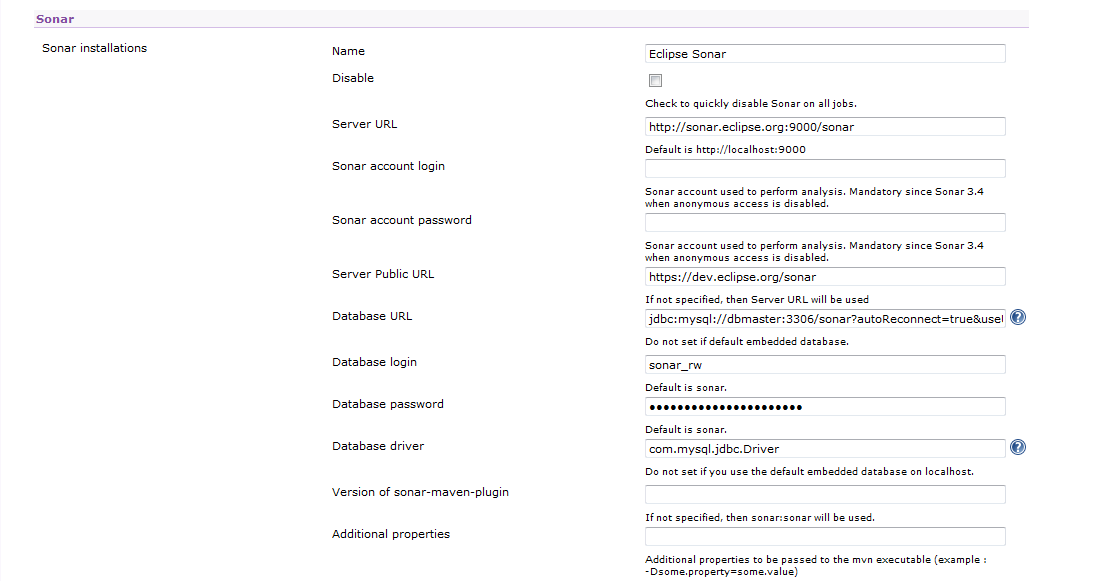 As explained before, the build needs some information about your project and its modules, so you will need to create a file, typically named sonar-project.properties, with the following entries:

Then define the modules (components) that need to be analysed:

And for each of them, define the projectBaseDir and projectName properties:

Then in the sonar build job add a build step to execute SonarRunner with the properties file for your project:

The initial documentation referenced Mickael Istria's blog entry at http://mickaelistria.wordpress.com/2012/10/08/sonar-at-eclipse-org/ . The information in it regarding the Eclipse process is outdated, but the article is still a good reading to understand how sonar works and what it can bring to you.

Sonar is installed on a VM accessible from inside Eclipse infrastructure. The database is made accessible from Eclipse.org servers and has a user for Sonar, and another user for Hudson. When running the Hudson Sonar plugin, the plugin uses this user to push to the Sonar database the metrics about your project.