With the increasing popularity of touch-enabled devices nowadays, it is getting more common to insert information directly on the screen, using the fingers or a pen, instead of using a mouse. This project aims to enrich user's interaction with GEF/GMF editors.

The Sketch API is target primarily at editors with a large set of elements, in which the user have to constantly search for elements to add on the GEF Palette.

The recognition is being made primarily with Levenshtein's algorithm for string distance. The user's sketch is transformed in a set of points placed on a grid, then each point is transformed to a number according to the next point's position. This approach is described in detail here (http://www.springerlink.com/content/u0r7261w01248q1t/).

Each element has a bank of "words" that describes its many forms, once drawn by the user. The recognizer compares each new sketch with the words of each element, calculating the distance between them. If the distance is smaller for a square than for a triangle, for example, then the element is probably a square. 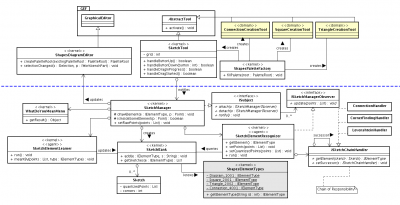