Difference between revisions of "Sirius/Tutorials/StarterTutorial"

This tutorial explains how to create your first modeling workbench with Sirius.

These instructions are based on a simple Domain Model which describes basic concepts about families.

The modeling workbench created with this tutorial will allow users to visualize and edit the members of a family and their parental relationships. 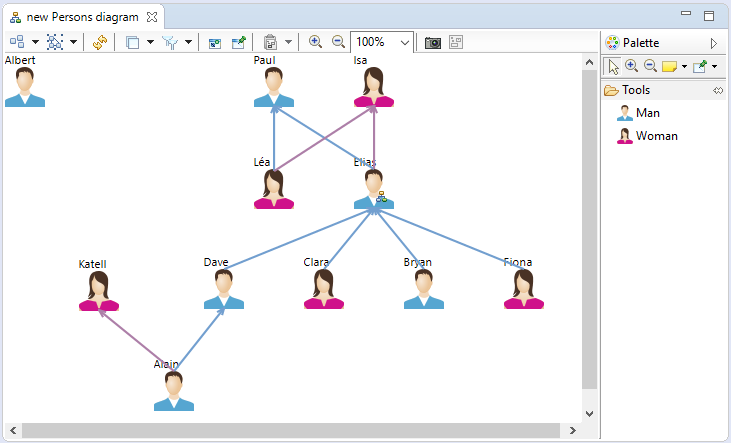 A modeling workbench allows users to create or visualize models of a given Domain Model defined with EMF (Ecore model).

This tutorial relies on a Domain Model (DSL) defining the basic concepts of families: 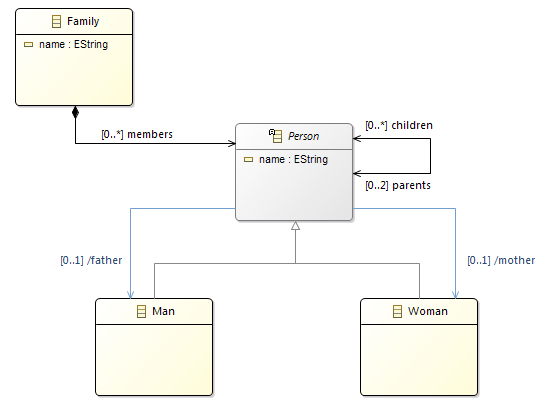 The Domain Model used for this tutorial can be found here: http://eclipse.org/sirius/doc/resources/getstarted/basicfamily.zip

To install this Domain Model import the projects contained in this archive (menu File > Import > Existing Projects into Workspace). 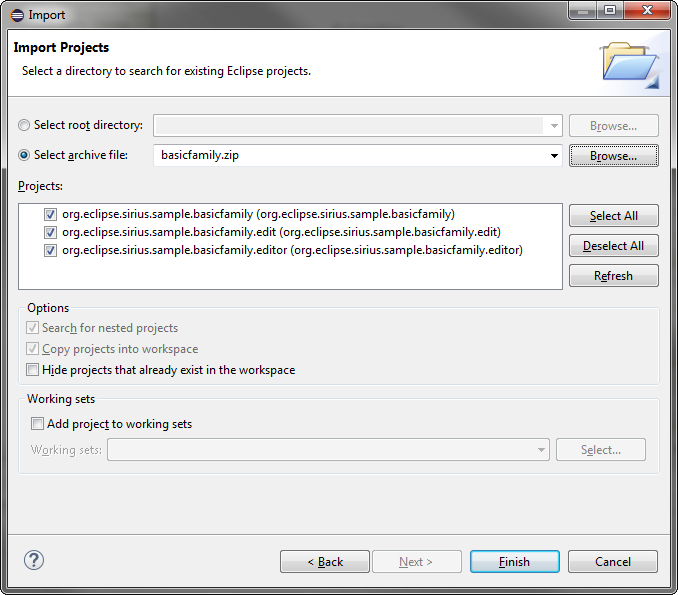 To launch a new eclipse application click on Run / Run Configurations and double click on Eclipse Application to get a New_configuration. You have to specify VM arguments in this new configuration as follows: 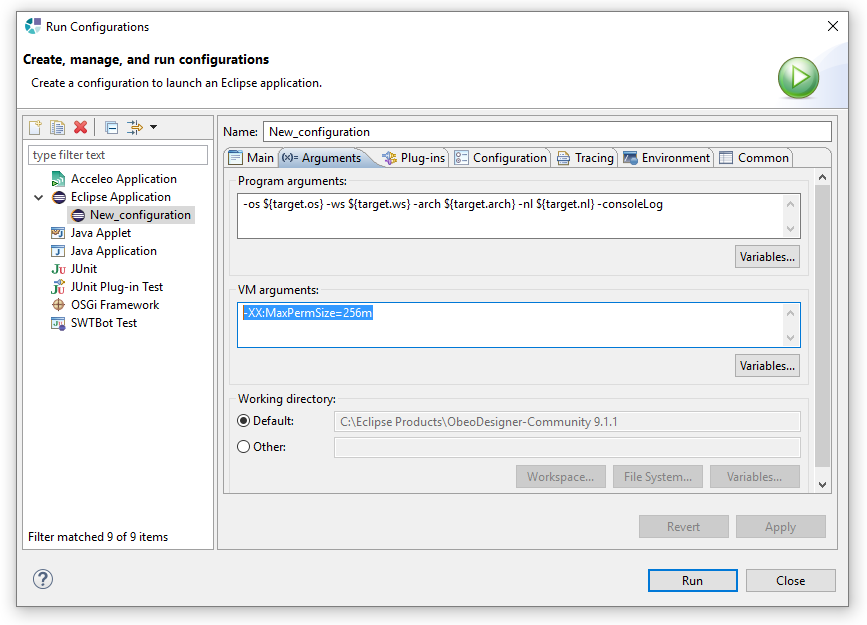 In the new Eclipse runtime, select the Sirius perspective.

Create a new Modeling Project from the Model Explorer: 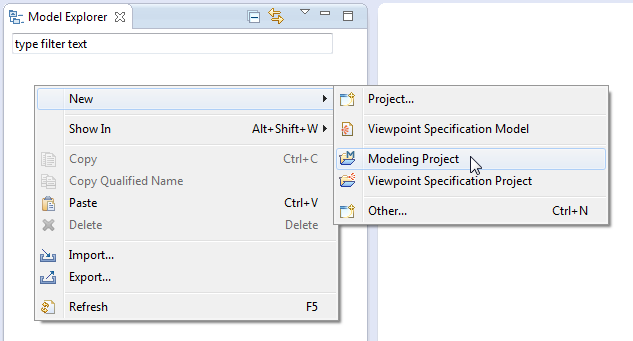 Give a name to this sample project. 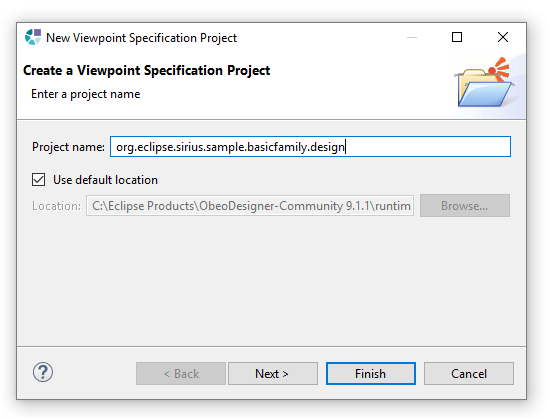 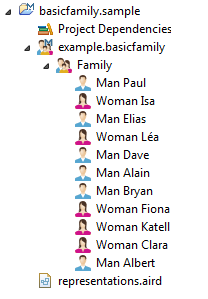 Double-clicking on this sample model opens a tree editor generated by EMF.

This editor allows you to see the properties and relationships of the model elements. 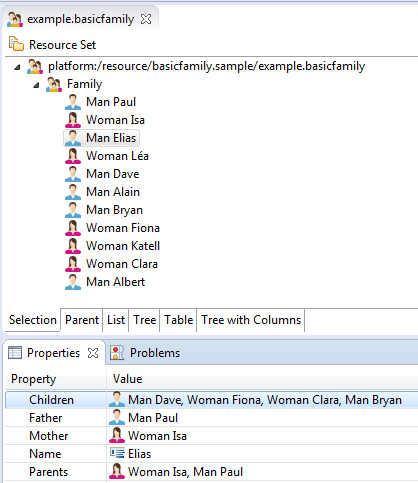 In this tutorial, we will create a modeling workbench which allows users to visualize and edit a family with its members and their relationships (father and mother).

The sample model imported previously will be used to test this designer.

A Viewpoint Specification Project will contain the definition of your modeling workbench. It can be created in a development workspace or in a runtime one.

In order to facilitate the test of the designer, we recommend to create this project in the same Eclipse runtime launched previously. 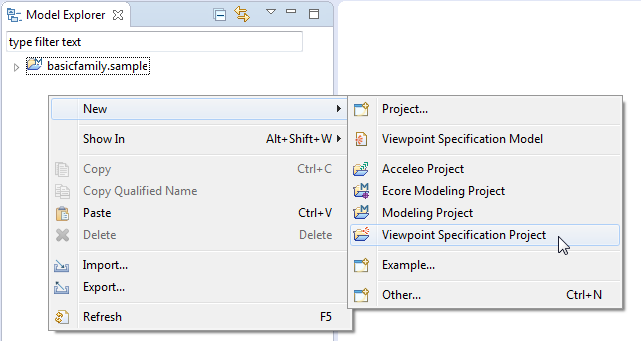 Give a name to this project. 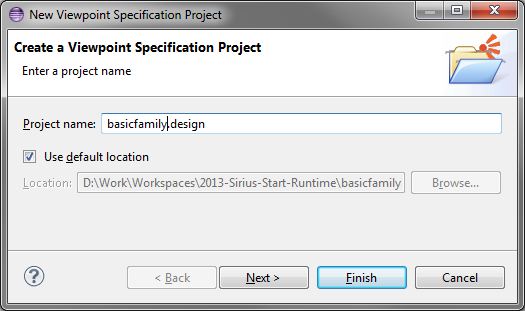 By default this file is named My.odesign, we encourage you to rename it according to your needs. 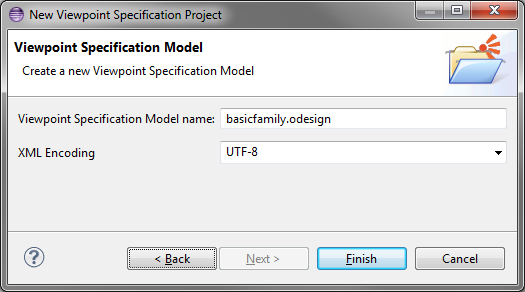 This file describes a modeling workbench which can be interpreted by the Sirius runtime.

Sirius automatically opens this file with a specific editor.

A .odesign file contains viewpoints. Each viewpoint defines a set of representations (diagrams, tables or trees).

That’s why you need to define at least one viewpoint in the .odesign file (menu New... / Viewpoint).

Do not forget to specify the Id of the added viewpoint.

The Model File Extension property defines the kind of models associated to the designer. We encourage you to set the extension associated to your domain model. 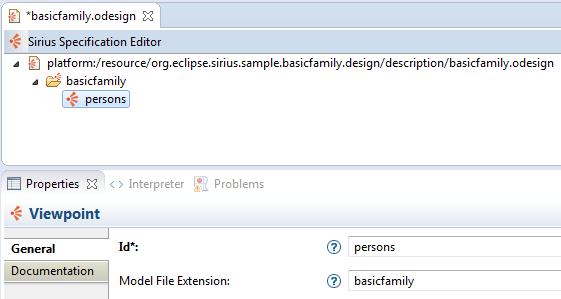 Properties of a Viewpoint

A diagram must be associated to a Domain Class: the diagram will graphically represent instances of this Domain Class.

At this step, create Persons Diagram which will display the persons of a family. 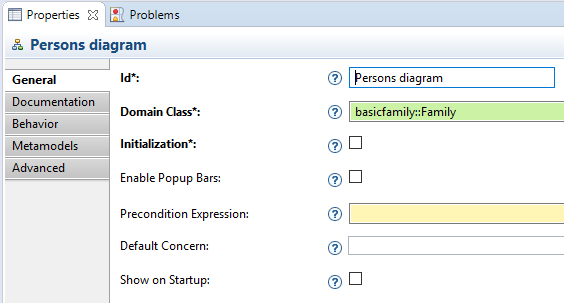 Properties of a Diagram

A Layer allows users to show only the relevant parts of the diagram.

A diagram contains at least a default layer to display its contents.

Add a Node to the Layer

A Diagram shows Nodes which are elements of the model. To create a new Node to the diagram, right-click on the Layer and select the menu New Diagram Element... / Node.

All created nodes must have an Id and must be associated to a Domain class. 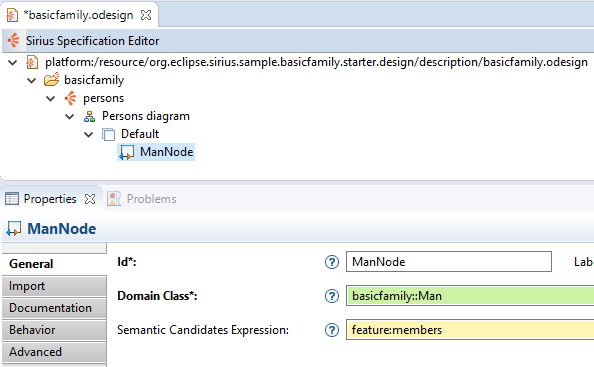 Properties of a Node

The Semantic Candidates Expression can be an Acceleo 3 expression contained between [ and /] . This expression is evaluated on the object associated to the diagram (here: an instance of Family).

You can also use three interpreters dedicated to very simple expressions, by using specific tags ( feature: , service: and var:) followed by the name of the feature, service or variable.

Auto-completion is available on an empty Semantic Candidates Expression property by placing the cursor in the empty field and hitting Ctrl+Space.

The completion will correspond to the empty expression for the installed query language (e.g. [/] for Acceleo 3). It will also place the cursor at the expected place where it is ready to start typing the expression.

Set a Style to the Node

To define the way the node is graphically represented on the diagram, it must declare a Style (menu New Style).

Here, we have chosen a square to represent a Man. 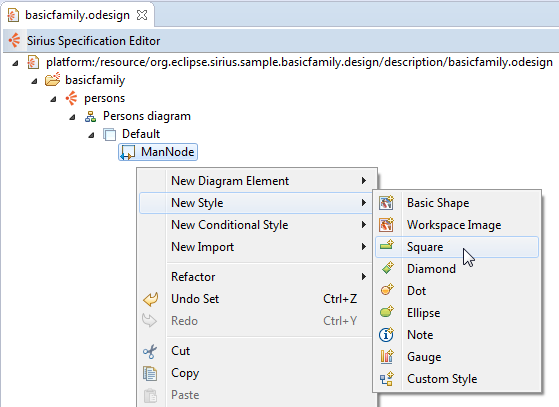 The Style defines the graphical attributes of the Node (e.g. its color).

The Style also defines the label of the Node. By default the label is calculated with the expression feature :name.

By using Acceleo 3 syntax you can enter your own expression. For example, you could display the name to upper case by specifying the Label Expression to

Properties of a Node Style

To test this first diagram, right-click in the Model Explorer view on the Modeling project and select the menu Viewpoint Selection. 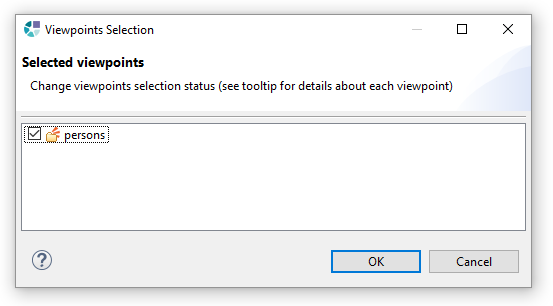 Then right-click on the sample model and select the menu New Representation / new Persons diagram.

When the diagram opens it displays all the instances of Man contained in the sample model.

They are represented as blue squares with uppercase names as a label, as it is defined in the definition of the diagram.

Improve the Style of the Node

To improve the rendering of the diagram, it is possible to display nodes with images.

In our example, delete the Square style created previously and replace it by a Workspace Image. 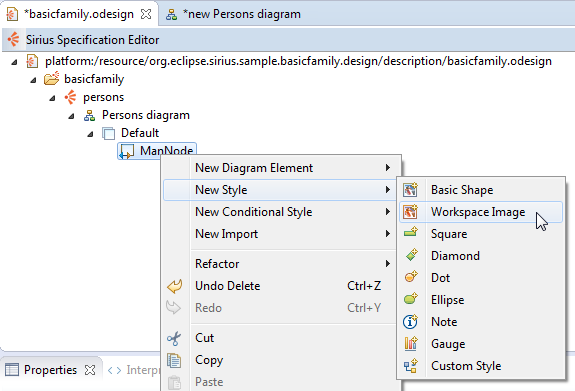 Specify the Workspace Path to define the image (the image can be placed in a specific folder of your project).

Properties of a Workspace Image:

In the Label tab, deselect the Show icon option to avoid displaying two images for each node.

Proceed the same way to create nodes for instances of Woman. Choose a different image for this node. 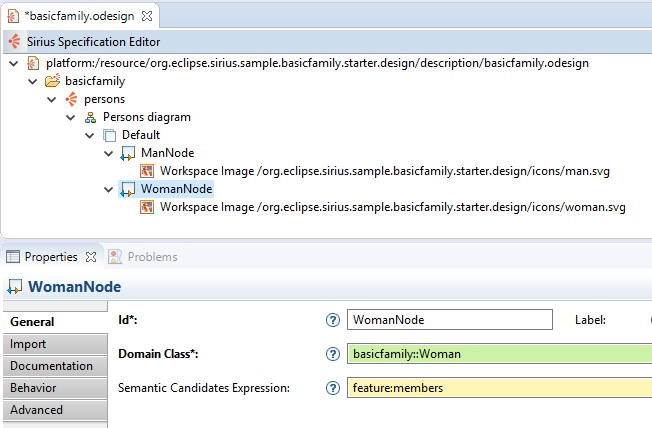 Saving the .odesign file immediately updates the current diagram to reflect the changes.

Add a Relation Based Edge

To display relations between Nodes, create a Relation Based Edge.

Enter the Source and Target Mappings of the relation: Sirius will select each instance of the concerned nodes which are visible on the current diagram.

Then, Sirius will evaluate the Target Finder Expression on each Source Mapping to detect the corresponding Target Mapping.

Properties of a Relation Based Edge

Edit the Style of the Relation

Edges are initialized with a default style which defines its graphical appearance (color, line style, etc.). You can edit this style to display father relations in blue. 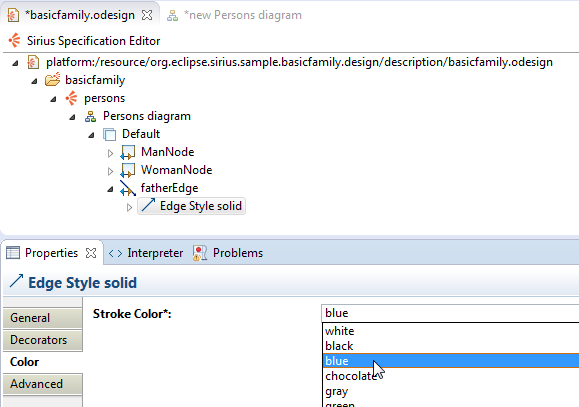 Then create a second Edge to display mother relations in light purple. 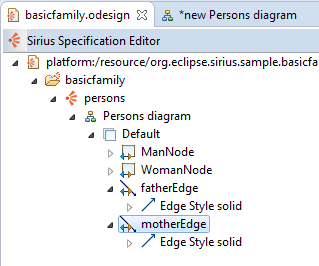 Save the .odesign file, refresh the diagram and click on the Arrange all button to see the changes. 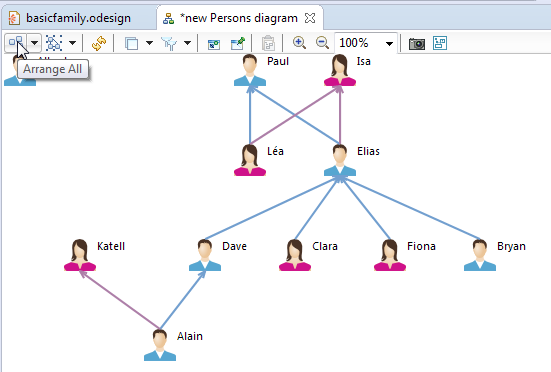 Add a Palette with edition tools

In the previous steps, we have created a modeling workbench which can display an existing model.

The palette is composed of tools which will allow the user to create new objects.

To define which kind of nodes will be created by the tool, the Node Creation Description element must be associated to an existing node (e.g. ManNode).

Properties of a Node Creation

Define the actions performed by the Create Node tool

When the user will use the tool, actions will be executed. You have to define them.

The first step consists in adding a Change Context element to define the context of the actions.

The Change Context element contains an expression which allows Sirius to find the model element which will be the context.

To write the expression, you can use the variable container which references the object holding the current diagram (e.g. a Family instance).

Properties of a Change Context

Then, add a Create Instance which will create a new instance of Man.

Specify the type of the new instance and how it will be attached to the context. 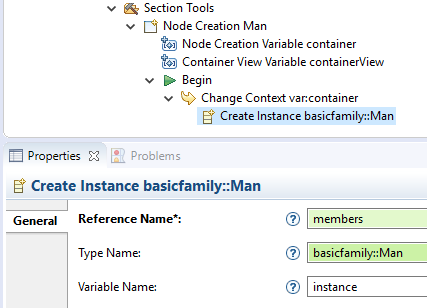 Properties of a Create Instance

To specify the name of the created element, you can also add a Set Value operation.

For example, the following Acceleo3 expression will compute a default name depending on the number of men already created.

Properties of a Set Value

When you go back to the diagram which displays your sample model, you can notice that the palette contains a section and an action.

You can click on the action and move the cursor to the diagram.

The cursor will automatically change to indicate that you can click on the diagram to create a new object. 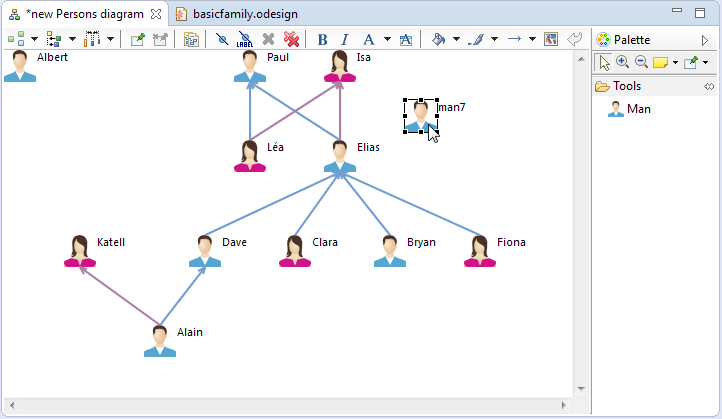 Its properties can be edited using the Properties view.