Deploy a Scout Application to Tomcat

This page shows how to export and deploy your Scout application to a Tomcat webserver using the Scout SDK.

If you have not yet installed Tomcat please go to the Tomcat homepage. Then download and install Tomcat version 6 or 7 using the proposed default settings. Once you started the webserver you verify that its running by starting your browser with the address http://localhost:8080. Your browser should display some page similar as shown below. 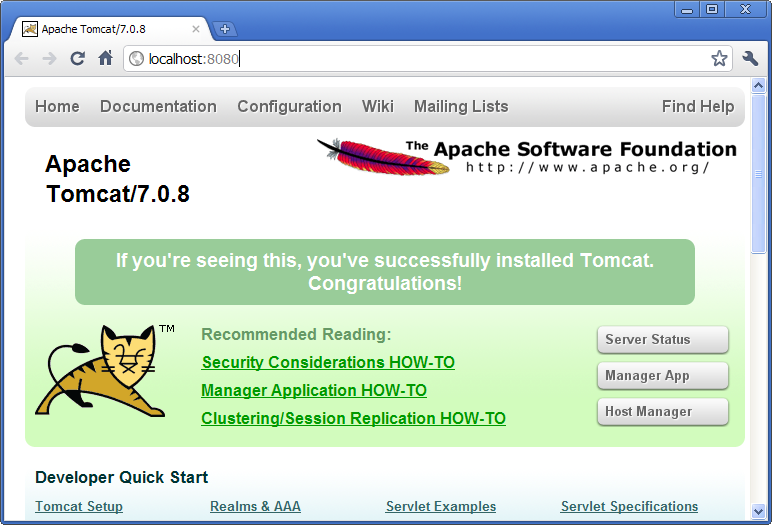 In the Scout SDK perspective use the context menu 'Export Scout Project ...' on the project node as shown below.

This opens the Export a Scout Project dialog as shown below. For this tutorial we assume that you have all user interfaces in your project. 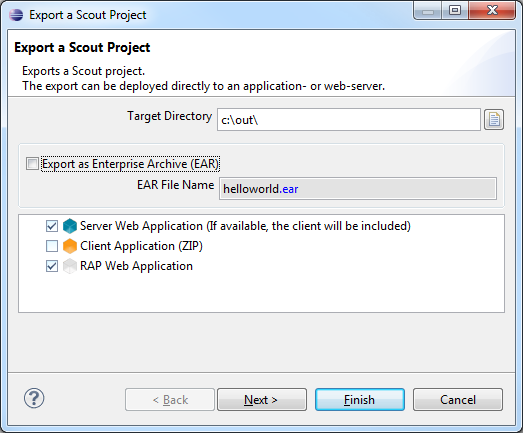 In the first field we define in which directory the exported files will be stored.
In the checkbox below we can also choose if we would like to create an EAR containing all WAR files. If this checkbox is ticked, all output WAR files will be packed together in a single EAR that can be deployed into an application server like JBoss. If this checkbox remains unticked, each WAR file will be stored separately in the output folder defined above.
In the list you can choose amongst the following export artifacts:

Depending on which elements are ticked you will have to specify the details in the next wizard pages. 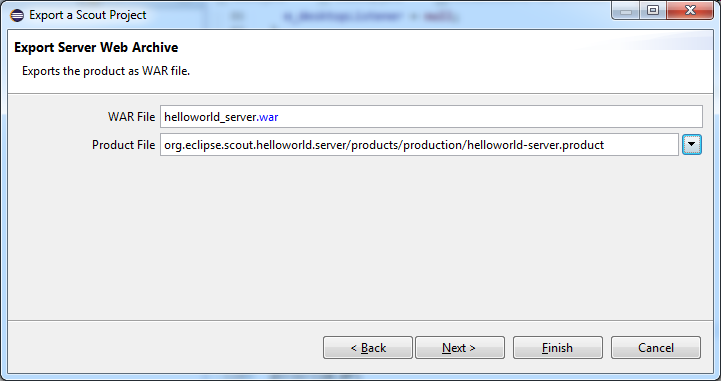 If the server is ticked as export artifact, you will have to define the WAR file name of the server application and choose which product you would like to export. 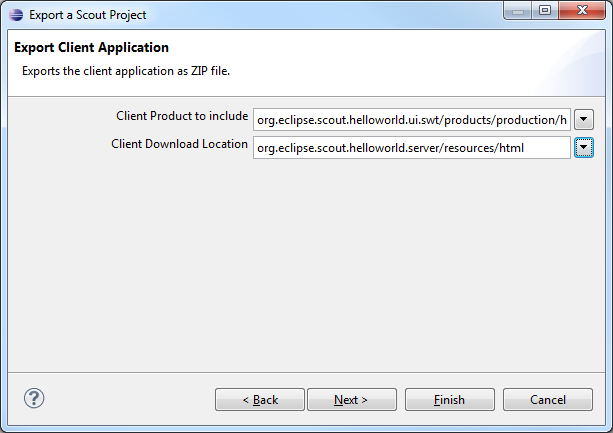 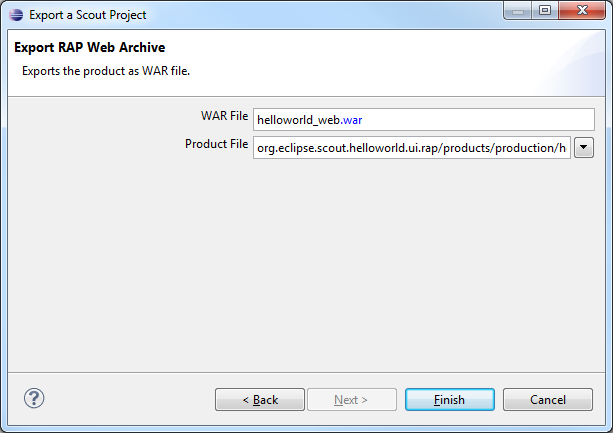 If the RAP Web Application has been ticked as export artifact in the first step, we must specify now how the resulting WAR file should be named and which RAP product that should be exported.

After pressing Finish the selected components will be exported to the target directory specified in the first step. As soon as the export as completed you can deploy the WAR files in the output directory to your Tomcat installation e.g. using the Manager App that is part of Tomcat: http://localhost:8080/manager/.

Now we can access the application homepage under http://localhost:8080/helloworld_server/

From there we can download the client application as ZIP file. After it has been extracted you can start the client. It will connect to the server that has just been deployed.

Issue with Basic Authentication and RAP UI
If you deploy your scout RAP application to Tomcat with activated basic authentication, e.g. by using the BasicSecurityFilter, you may have problems accessing the website. This happens due to a bug in the generated plugin.xml, which is fixed for Scout 3.9.1 (Kepler SR1). See http://www.eclipse.org/forums/index.php/t/490191/ for details.

When you redeploy to Tomcat, you need to ensure that you get the new version of your application installed. We have observed that sometime, some old binaries are cached and that the second deployment is corrupted. To be sure to deploy properly, follow this process:

Deploy to other Webservers

For the deploy procedure described here, you may use the WAR files as generated in the description for Tomcat.

Start with opening the GlassFish web UI on address http://localhost:4848/. In the web UI, choose the button to deploy a web application. 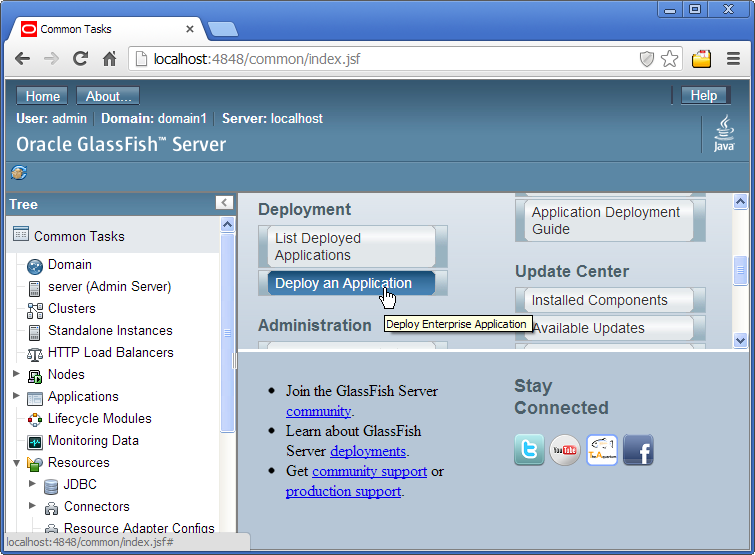 Click on the Upload button, select the helloworld_server.war file as shown below. The complete the deploy by clicking on the Ok button in the GlassFish web UI. 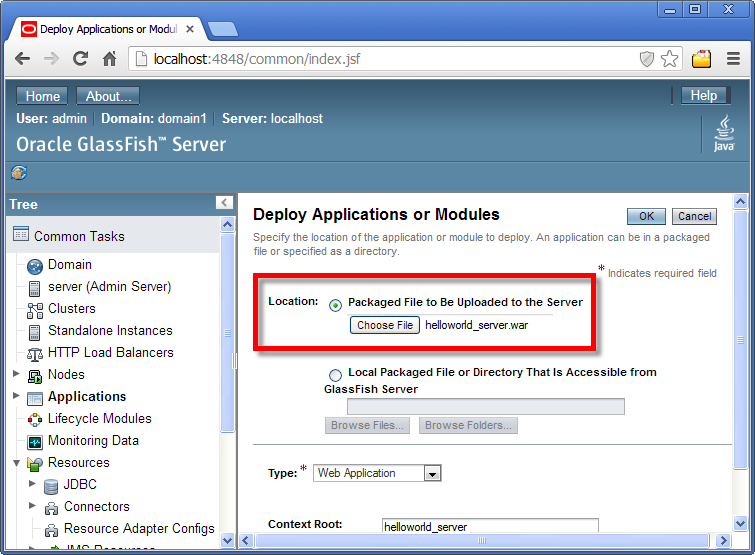 Then, repeat the steps to deploy the helloworld.war file. You should now see the two web applications listed in the GlassFish web UI. 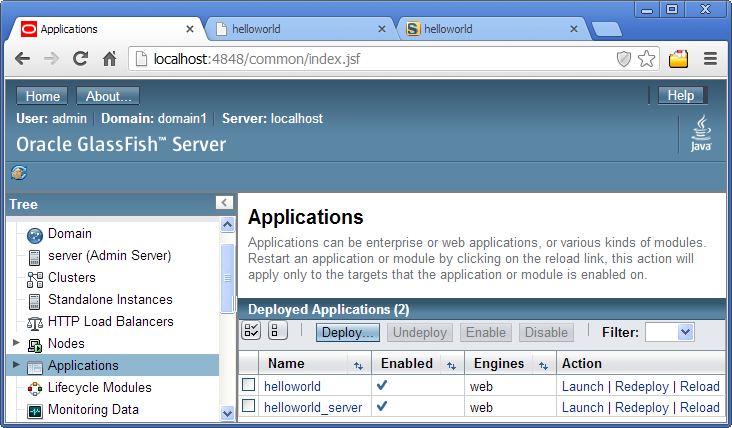 And the running web application should be available under these addresses:

This page was last modified 03:42, 17 February 2014 by Dietmar Stoll. Based on work by Jérémie Bresson, Claudio Guglielmo and Matthias Zimmermann and others.