Difference between revisions of "Scout/Contributions for Scout Committers"

This section presents some of the current workflows when using Git.

Push a single commit to Gerrit

We want to modify something on develop branch

If you are sure, your change is good:

Otherwise read #Push a second version of your change

Push a second version of your change

Push a modification on somebody else change

Cherry-pick a commit into another branch

The idea is to cherry pick a commit from develop to a release/3.9.1 branch

Rebase your local branch on to of develop

Assuming you has started a branch like in #Push a single commit to Gerrit but you have not finished at the time, and other developers have pushed commits on develop in between. You need to rebase.

If you haven’t any conflicts:

Multiple commits on your feature branch

For work on bugs that require more time, you keep your working branch for a longer period of time

When your feature is ready:

A common everyday workflow shown in the picture below. The steps that are always necessary are displayed in red. 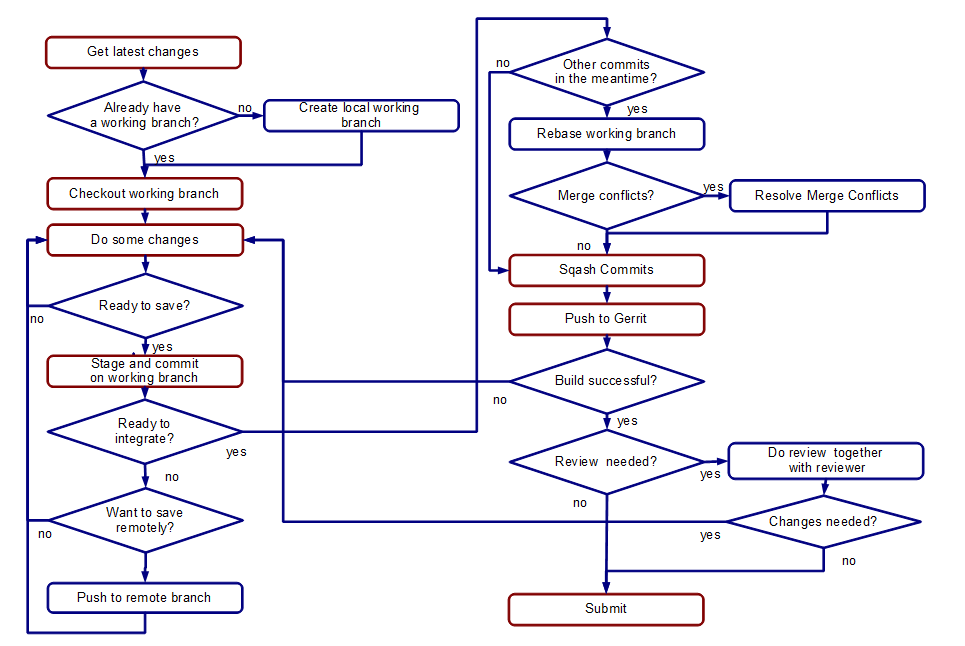 When contributing features and patches you first need to think about on what release and branch it needs to be committed. An overview on branches is described here: Scout/Contribution_Guidelines#Git_Branching_Policy. A developer will usually one of the following:

The scenarios 1 and 2 are described here. 3 is done the same way as 1.

When you create a new feature you need to consider the following branches:

For every new feature we create a new branch. We do that because

Get the latest changes

Before we start we make sure we have the latest changes:

We can look at the commit history to see, if everything is as expected. Expand your local branches, right-click on develop and choose Show In -> History. We can see that our local 'develop branch (marked in green) refers to the same last commit as the remote develop branch shown as origin/develop in grey. 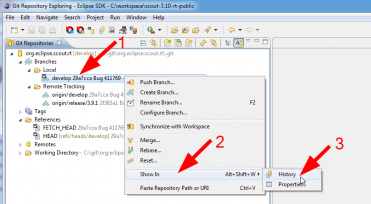 Right-click on the commit where the origin/develop branch is pointing to and select Create Branch.... As Source ref or commit we select refs/remotes/origin/develop and call the local feature branch luna_target_bug412011. Select None as pull strategy and check Checkout new branch. Click on Finish. The feature branch should now be created locally. 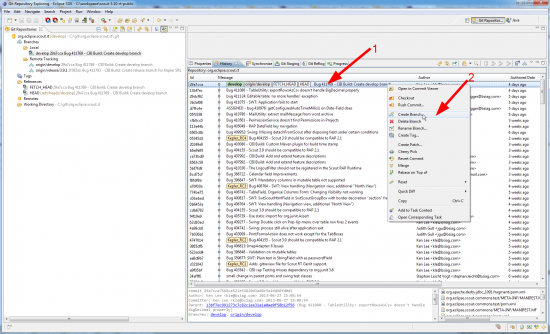 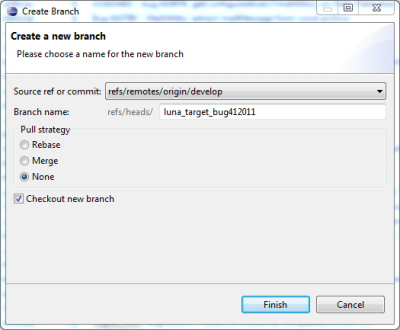 The black checkbox icon on the left and the bold font in the History view indicate that the feature branch is currently active (checked out). 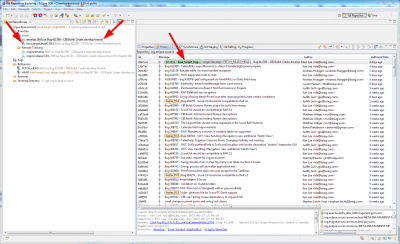 Now we do some changes and commit on the local feature branch.

In our example we made some initial changes for bug 412011 and are now about to commit a new file into the local branch. Switch to the view Git Staging. In the Unstaged Changes area all new and modified files are listed. We move the new eclipse-3.10I.target to the Staged Changes area by using drag-and-drop and enter a commit message. 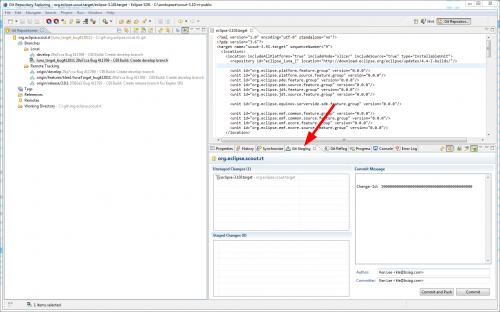 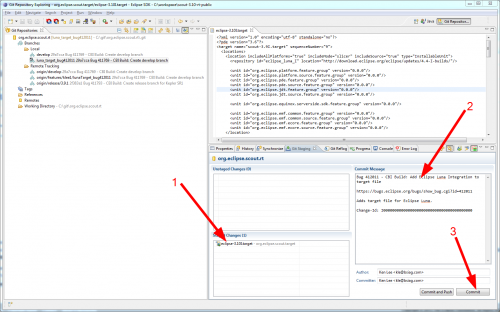 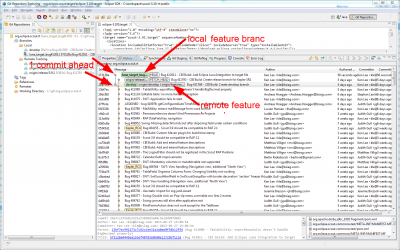 Now we push the recently created local feature branch to the remote repository on a remote feature branch. We do this to backup our work and allow other people to work on this feature. We also trigger a build on the sandbox hudson to verify the changes.

Right-click on the local feature branch luna_target_bug412011 and select Push to Gerrit.... The remote repository should already be the correct Gerrit Push URL. Press Next. 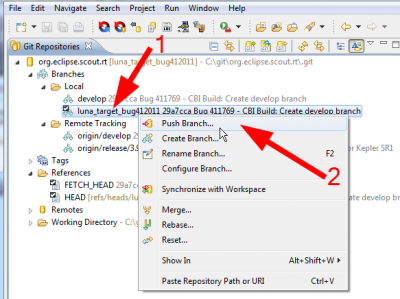 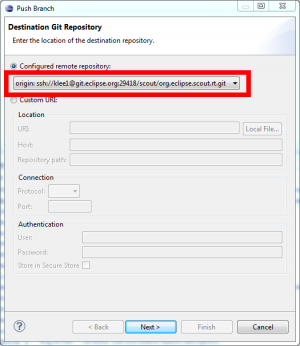 refs/heads/features/[committerID]/shortDescription_bug[ID], where [committerID] and [ID] should be replaced by the actual value. Press Finish and the feature branch should now be pushed onto the remote repository. There should be no error. 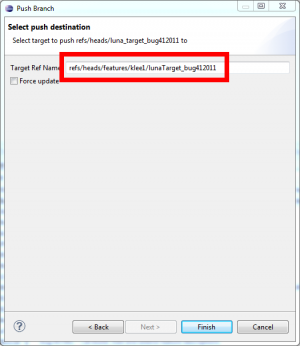 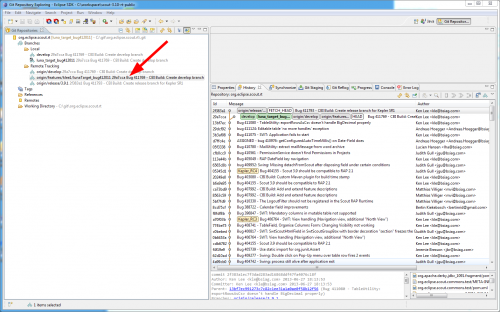 The feature branch is visible in the Remote Tracking directory. 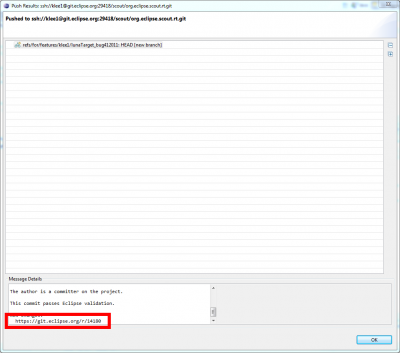 This URL can be opened in a browser. The Sandbox Hudson will verify the supplied changes and set the verified flag if the build was successful. 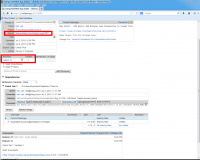 After reviewing the code, the changes can be merged into the feature branch by clicking on the button Review and setting Code-Review +2 and IP-Clean to +1 and pressing Publish and Submit. 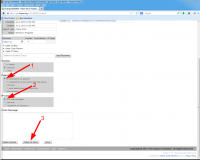 Switch back to EGit, right-click on the Scout RT Git repository and select Fetch from Upstream.

The local feature branch and remote should now point to the same commit ID.

Before we apply our changes from the feature branch to the develop branch (currently the Scout Luna branch), we decide to make some further changes, commit them into the local feature branch and push them to Gerrit again (please repeat step 6). The new changes for our example are available here. As before, we review and apply these changes into the remote feature branch resulting the Commit History view to display something like this:

Reset-Mixed means that the changes from the feature branch will be made available as Unstaged Changes. In the Git Staging perspective we move the changes to the Staged Changes area and commit them locally.

Rebase branch develop to origin/develop and Push to Gerrit

The local feature branch luna_target_bug412011 is now 1 commit ahead of the origin/develop branch, so we push this commit to Gerrit as follows: Select Push to Gerrit... and configure the dialog like this:

Hit Ctrl+Space in the Gerrit Branch field and choose develop branch, select refs/for/ in the drop-down field. After a successful code review at Gerrit, we apply this change into the remote develop branch.

After fetching the remote branches the Commit History should now display a new commit on the origin/develop branch.

Not possible at the moment. See https://bugs.eclipse.org/bugs/show_bug.cgi?id=408531.

When you create a new Hotfix you need to consider the following branches:

When you create hotfixes you start as described with features, but instead of your remote feature branch your branch is now called hotfix. You do all the steps to push the change to develop and as a last step cherry-pick the change to the release branch.

The local branch will be named release/3.9.1. 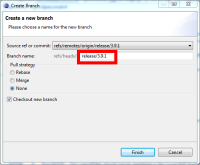 Press Finish and a new local branch should be visible and active.

We will now pick the commit from origin/develop that we would also like to have in our release branch 3.9.1. Right-click on the commit f3ea51c and select Cherry Pick.

The changes are automatically applied and committed to the local release branch.

As explained in step 7, we can push these changes to Gerrit. Right-click on the Scout RT Git repository and select Push to Gerrit... Enter release/3.9.1 in the Gerrit Branch field ans select refs/for/ as before. 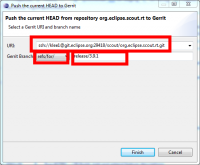 Press Finish and follow the same procedure as described in step 7 for applying the changes in Gerrit to the remote release branch. Note: We abandon the change since this feature is only intended for Scout 3.10 and not for the release branch 3.9.1. However, the main message how to apply changes from the develop to a release branch should be clear.

If you need to change the Eclipse Scout API, keep a few things in mind:

Whenever possible don't physically delete classes with your change, instead set them to deprecated, to give other developers time to migrate. The newly deprecated class should have the following information:

An example is illustrated below:

Also add a migration note to the bugzilla ticket.

How to Fetch a change from Gerrit

If somebody has pushed a change to Gerrit, and you like to modify something (push a new Patch set for the change), a good way is to fetch this change into a local branch. You can amend the commit and push it back to Gerrit.

With the Gerrit Mylyn Integration 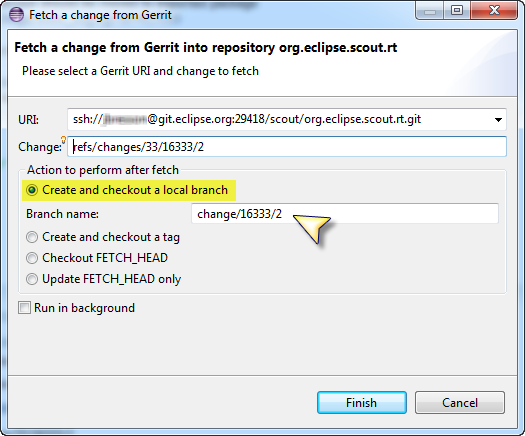 Without the Gerrit Mylyn Integration 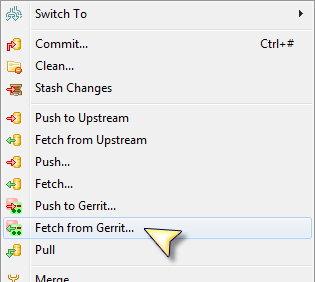 How do I keep my feature branch up to date?