SMILA is a framework with a lot of functionality. Most is invoke automatically by internal operations. Nevertheless, the user has to configure and start an initial operation. All functions a user can execute are accessible from the JMX Management Agent. On the following pages you will learn how to use SMILA with the aid of Java's built in JConsole and to handle the JMXClient which features access to SMILA commands via batch files.

Management with the aid of jconsole

The jconsole is a little tool for monitoring java applications nested in the JDK. Over a JMX connection it’s possible to connect an application with the swing UI of jconsole. If you start up SMILA engine and open jconsole you can connect the Jconsole to SMILA immediately. 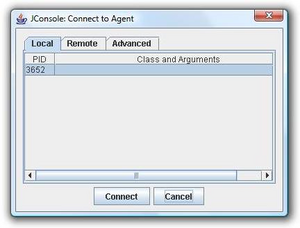 After connecting you can find SMILA operation on MBeans tab in the Tree on the left site.

There are four components of SMILA which you can access over jconsole.

Here you can manage the crawling jobs. The following commands are available:

The RecordRecycler gives you the possibly to push already crawled records into Data Flow Process again. For example it could be useful if you want to modify record in the index with another pipeline. To control RecordRecycler there are following operations available.

The DeltaIndexManager stores a hash value of each record. It is part of the Connectivity Framework and signals a crawler that a given record has (not) changed since the last crawl. See DeltaIndexing documentation. Within jconsole you can use the following commands:

With Lucene you have the possibility to invoke several method concerning the index. Following operation are available:

A PerformanceCounter monitors the activity of a component. In SMILA currently two kinds of PerformanceCounters are available, one for Crawlers and another for Processing within the Data Flow Process. With the aid of jconsole you have the possibility to look at interesting counters of SMILA. There exist a lot of views that allow you to get information about different situations.

After you start a crawl job immediately a new branch in MBeans-tree appears with the following nodes/values: 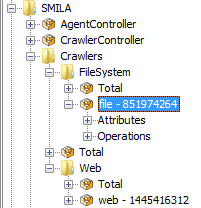 The nodes contain a subset collection of these possible counters:

As soon as Router puts Records into MQ the Listener pushes them into Data Flow Process. This time a new section with the following hierarchy (only an example, because PerformanceCounters vary according to your personal usage of SMILA) appears in MBeans-tree:

The JMX Client is a lightweight and very easy to use command line driven component to use access most JMX Management operations. It works without jconsole and provides only a few commands. If you want to have full control over SMILA framework you have to use jconsole as described in the chapter above. But if you only want to start a crawl job or check if a crawl job is still active, you don’t have to use the jconsole. Furthermore you have the possibility to expand functionality of JMX Client. It is highly configurable with only one single configuration file.

If you open command window in folder SMILA/jmxclient and execute run.bat you'll get very useful help.

The JMX Client can be used to simplify JMX Management while using batch-files for most important functions. But that’s not all. With the aid of JMX Client you have the possibility to use SMILA completely from your console or write own batch files which could invoke for example one method after another. The Client works with commands. These commands are managed in only one configuration file. In addition to the pre-defined commands you are able to create own commands. You only need to know the fully qualified class name and method name of function you want to invoke. To execute a command simply use this pattern: run.bat commandName commandParameters. The JMX client is able to execute any JMX operation and get any JMX attribute and to make it in one batch with reusing previous results.

There is a configuration file located at org.eclipse.smila.management.jmx.client/schemas/jmxclient.xsd (Source) and jmxclient/schemas/jmxclient.xsd (Build). The default configuration file could be found at org.eclipse.smila.management.jmx.client/config.xml (Source) and jmxclient/config.xml.

work needed
the example is outdated and the English is bad

To use commands which interact with JMX a connection is needed

for DOMAIN "SMILA" and leaf identified by KEY „CrawlerController" execute operation "startCrawling" with one input parameter ( its String type - default) JMX will return result to client, e.g. "Crawl with the dataSourceId = file and hashcode [595826] successfully started!"

First subnode ( here its logical IN ) is a condition to exit from WAIT task. Second subnode is a batch to execute if we not exited. So each 1000 ms it will ask for status and validate is it IN "Finished" or "Stopped":

Since rev 464 (after M2), the JMX client is also added to the Equinox OSGi console as a command provider. Thus you can now invoke the same configured actions also from the OSGi console without having to open a seperate window. The command name is smila followed by the same arguments used with the run script in SMILA/jmxclient. Use help to get a description of the supported commands, the output should look like this:

Usually a lot more help output for the standard Equinox commands follows so you may need to scroll back a lot to find the description of the smila command.

See the next screenshot for an example session in which an agent and an crawler is controlled using the OSGi JMX client only. You'll see that the commands are exactly like when using the run script, only the command name is smila, not run.