The Application to Test

The application we are using as basis is the "Restaurant - RMI Service" application available in the examples of SCA.

You can find the source of this application in the SVN or by selecting File > New > Other > Examples > SCA > SCA Examples. In this page, the project as been saved in the workspace as the RestaurantRMISample project. It contains the composite, the interfaces and the implementations. 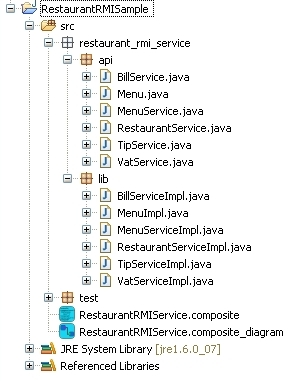 Our application is made up of five components:

Using the SCA Composite Designer, we got this diagram.

The composite source can be found in the SVN. What we are going to do is to write and run unit tests for the first component RestaurantServiceComponent in the same way SCA testing tools would allow us to do.

For commodity reasons, we copy the different interfaces in relation with this component (services and references). The interface of the component services are the following:

And the implementation class of RestaurantServiceComponent is the following:

The goal of this example is to show how we can perform unit test directly from the composite elements.

First thing, we want to separate the business code from the testing code. Since SCA projects can be big, it seems better to create a distinct project in a workspace to test this application. We first make a right-click on the SCA project we want to test and we select SCA > Create Test Project.

Now this is done, we would like to write unit tests for the first component RestaurantServiceComponent. We maker a right-click on the component (/ composite) to test and we select SCA > Create Unit Test. This right-click can be made in the SCA Composite Designer or in the XML editor for *.composite files. It results in the generation of files in the tester project. Let's take a look at the interesting ones for instance.

The elements of the second component are already known. They come from the tested component. You can notice that its references are wired to services of the test component. These services' implementations will delegate the calls to mock objects.

The test component has one service which is promoted by the tester composite. Its interface is the following one:

SerializableTestResult is a class that embeds the fields of the TestResult (the result of a JUnit test) and which is serializable, so that we can pass it through RMI. It is contained in the SCA Test library (not described here).

The implementation of this component is made up of two important classes. The implementation itself implements the service given above and all the references of the tested component. In this example, it means we implement RunTestService, BillService and MenuService.

Notice that the service to test is present as a reference in this class. Let's now take a look at the methods of this class.

All the references' operations have the same behaviour. They get a mock object from a singleton class and delegate the call to this object.

The main method, runScaTest, creates a TestSuite, instanciates a TestCase and register all the methods which begins with "test". It then runs this TestSuite and returns the result as a SerializableTestResult.

The last generated class is a TestCase (only its skeleton is generated, testing methods have to be written by the user).

This skeleton has two attributes which are the mocked references. It has a third attribute which the service of the component to test (set in the constructor). Eventually, we configure the setUp method to reset the behavior of the mocks between each run.

Until now, all of this can be generated by a tool. In this case, the only remaining thing for the user is writing test methods.

Do not expect the following tests to be smart. They were written to show what could be (and not what should be) done to test such an application.

In these test methods, we defined the behavior of the "references" (the mock objects) by using EasyMock methods, and we check assertions on service operation results. The difficulty here is how you can foresee the behavior of the references. It requires you to know how the references are used in the implementation of the component. From this point of view, you do not test only the service service contract but also the way and how the service is implemented. We are not really in a Test Driven Approach.

We now have written a TestCase for SCA and we need to run it on a SCA platform. This example has been run manually on a Tuscany runtime (i.e. Tuscany jars were added manualy to the project class path). But there is no reason for this application to not work with Fabric3 or Frascati. In the future, SCA platforms will be registered as servers in Eclipse (like J2EE servers - registration through the SOAS sub-project of STP). For the moment, Tuscany, Fabric3 and PEtALS (with its SCA service engine based on Frascati) are expected to be supported before the end of the year.

Running test is made by right-clicking on the TestCase to run and by selecting SCA > Run > platform, where platform is a registered runtime server. It results in the deployment of the tester application and in the generation of a client to call this application.

When both of these classes are run, it prints:

In Eclipse, results should rather be displayed in the usual JUnit view instead of being printed in the console. The example of this application is available in the SVN of the SCA sub-project of STP (project org.eclipse.stp.sca.test.sample in the incubation directory).

This page was last modified 04:37, 9 November 2010 by Stephane Drapeau. Based on work by Vincent Zurczak.