The objective of this tutorial is to show how to develop a simple SCA application using the STP/SCA Composite Designer.

You can download a pdf version of this tutorial: "First Steps with the SCA Composite Designer".

The tutorial illustrates how to:

In order to be able to test the sample SCA application, you need to :

First you need to install Apache Tuscany on your machine, as follows:

You should see the following folder structure. 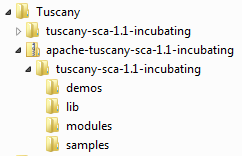 Set up Eclipse for Tuscany

Now you need to create a User Library in Eclipse to contain the Tuscany runtime JARs and dependant JARs:

Then you have to add this library to your project build path.

The following figure shows the SCA assembly of the application that you will create. 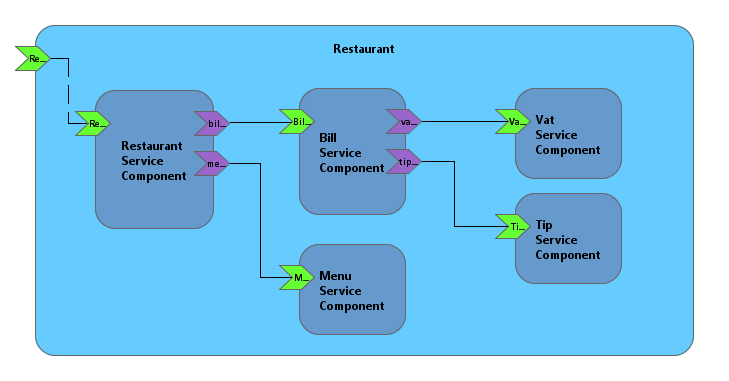 This composite, named restaurant, is a composition of five components:

RestaurantServiceComponent
Allows you to see the Menus proposed by the restaurant.
It allows also to compute the bill for a particular menu.

MenuServiceComponent
Provides different menus. A Menu is defined by a description and the price without taxes.

BillServiceComponent
Computes the price of a menu with the different taxes.

First, create a Java Project to hold the Restaurant application:

To create an SCA diagram:

The new created file is automatically open with the SCA Composite Designer. To open the Properties view, do a right click on the diagram and the select Show Properties View. 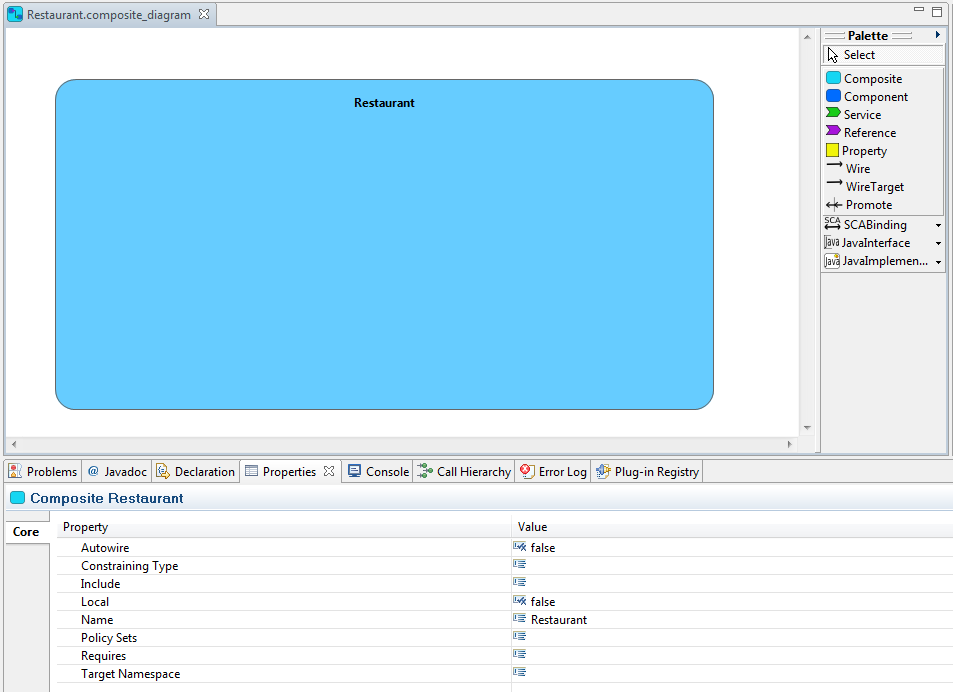 Now, you should see the following project structure:

Add a first component named RestaurantServiceComponent. You can do it with the Component creation tool which is in the palette or using the contextual menu.

Next, add the following services:

In the next step, add the following references:

Now you can wire the services and references. From the palette, you can use :

The next step is to promote the restaurant service. Two ways are possible to promote a service (or a reference). You can: 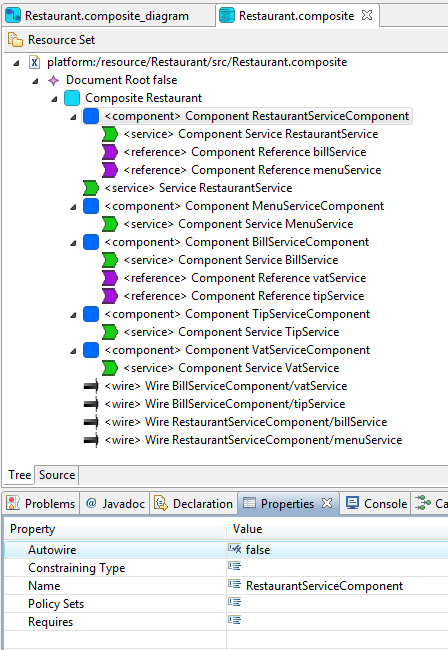 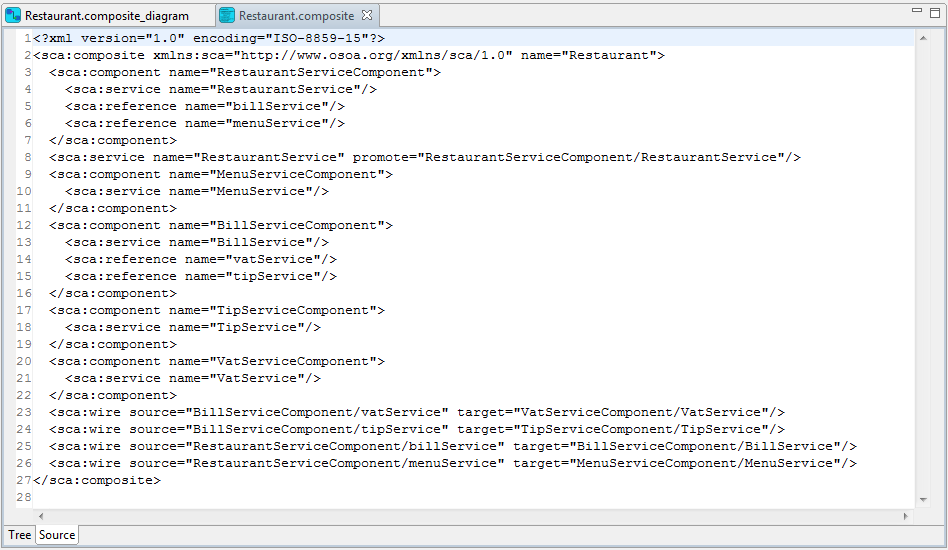 First, in the src directory of the Restaurent project create a new package named restaurant with two sub-packages named api and lib. 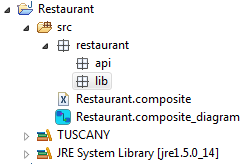 Define the interfaces of the services (restaurant.api package):

Define also the interface of the Menu (Data Transfert Object):

Next, define the implementations (restaurant.lib package).

Now, you can fill you SCA assembly file with the interfaces and implementations that you defined. Open the Restaurant.composite_diagram with the SCA Composite Designer.

You have two ways to fill your SCA assembly file: 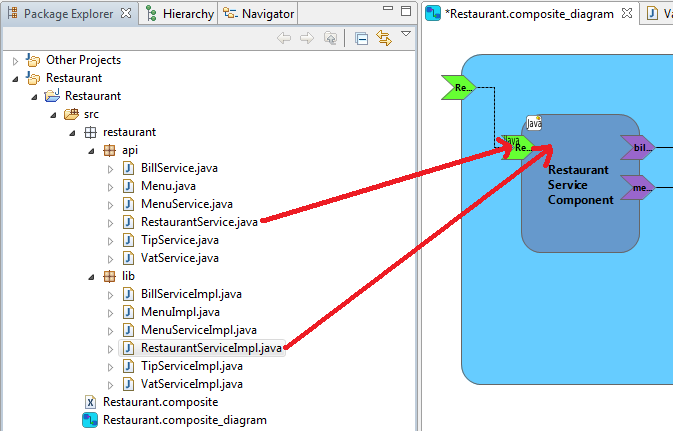 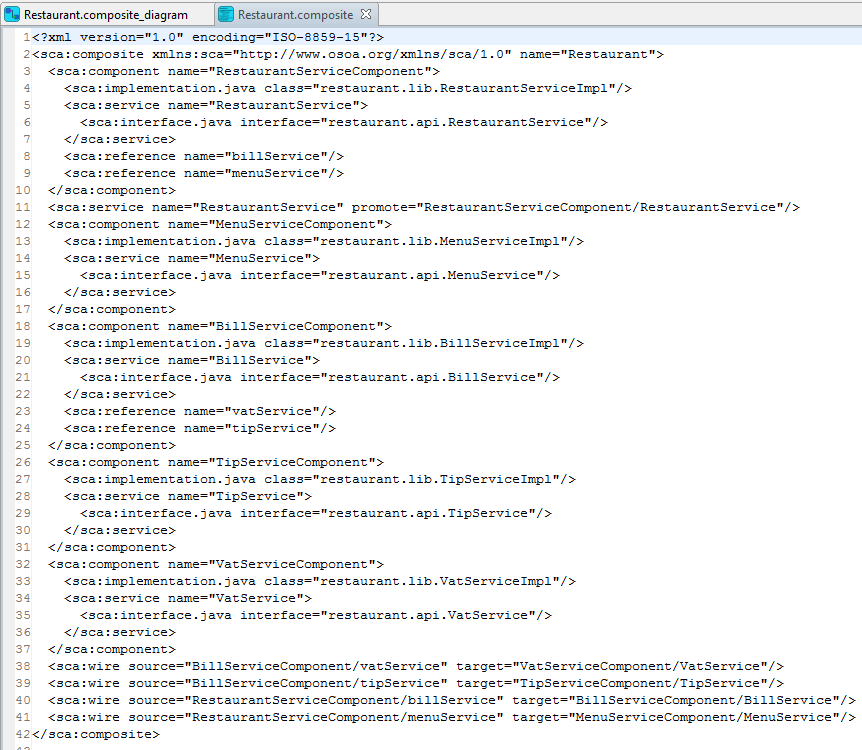 Right-clik your diagram (on the Canvas part = white part of your diagram), the contextual menu allows:

to validate your diagram, and to hide/show implementation, interface and binding icons. 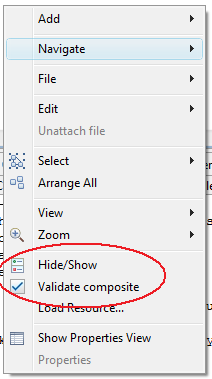 You have finished developping your first SCA application with the SCA Composite Designer. It is time to test.

Create a new Package, named test, in the src folder of your porject. Create a new Java class named Client:

In the Console view you should see:

In some countries there is no tip. SCA allows to simply refine an implementation property in the configuration file.

In the Properties view set the value to 0. 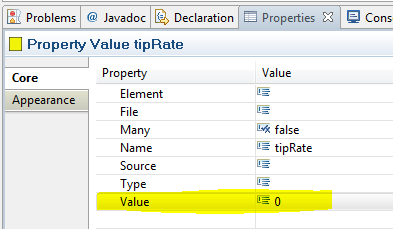 Launch the client. Now you should see:

Use JavaScript for your implementation 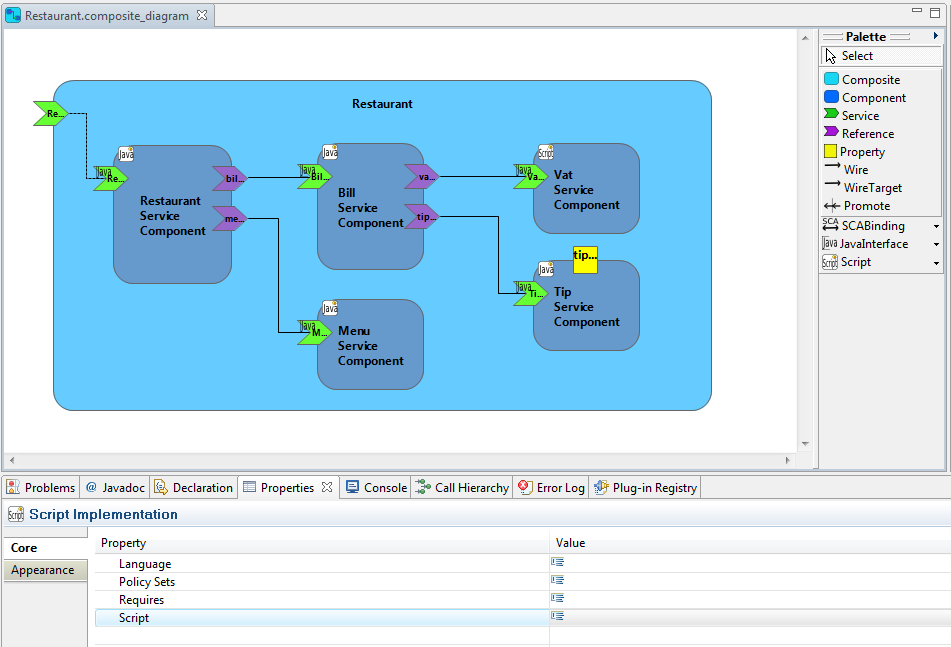 Set (in the Properties view) as Script with the value restaurant/lib/VatServiceImpl.js.

Launch the Client. You should see: 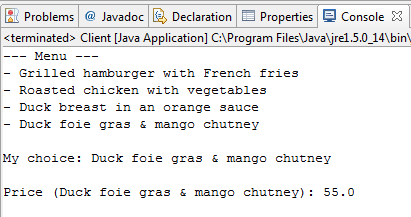 Use an RMI Binding 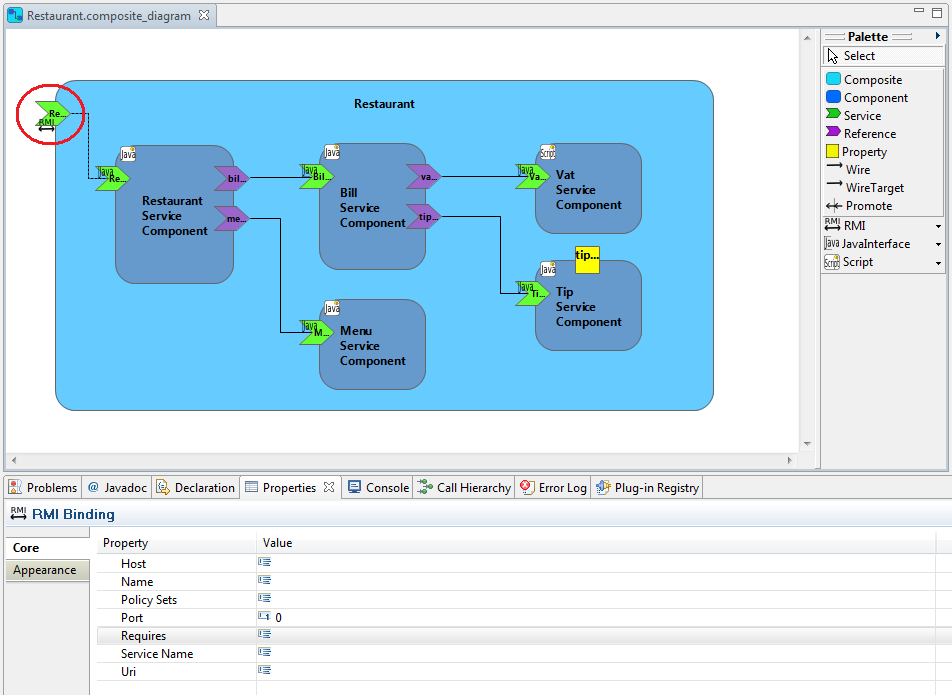 Set (in the Properties view) as

Launch Client2. You should see:

This page was last modified 04:34, 9 November 2010 by Stephane Drapeau. Based on work by Matt Ward, St and Maxime Porhel.