Getting Started with Security

The basic implementation concept of security in Riena

Security has many aspects. This document addresses authentication, authorization and session handling. Not included are ssl certificates or encryption in any way.

and policyproviders for checking for permissions.

This all with some additional APIs and classes are what is called JAAS. Riena of course needs to use JAAS classes. There is also a new incubator project in Eclipse called equinox.security which is meant to create a wrapper for JAAS in the Eclipse world.

So Riena adds this distributed aspect. 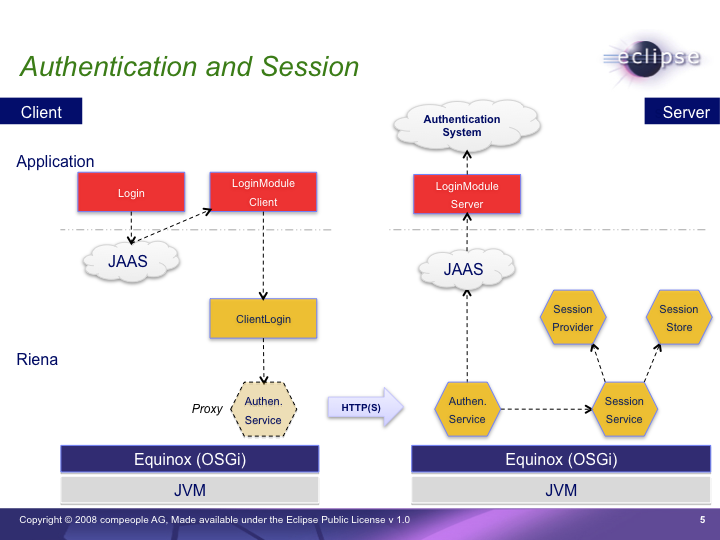 Once authenticated, the Subject is available on the client in the SubjectHolder which can be retrieved using the SubjectHolderService.
The sessionid that the authentication service generated is also transferred in each and every remote service call to the webservices. There a servicehook before the actual webservice invocation on the server that looks up the sessionid in the SessionService, retrieves the Subject and stores it in the SubjectHolder on the server. This way the webservice can retrieve the current Subject anytime during the webservice call.
The SubjectHolder is a singleton on the client and on the server it is threaded (one instance per thread). So each call on the server has a seperate SubjectHolder instance.
If run with SecurityManager (a JAAS feature), it necessary to activate RienaPolicy as policyprovider. RienaPolicy is then called by the SecurityManager for each Permission that needs to be checked. RienaPolicy retrieves the permission for the current Subject from the PermissionStore which retrieves it on request from the AuthorizationService. Its easier to run the JVM without SecurityManager switched on and let the Business Logik only check for Business Permissions (and ignore FilePermissions and other standard Permissions for the moment). For that the Sentinel can be used. The Sentinel can be used anytime at client or server and checks whether the current Subject has a certain specified Permission. The reply is a boolean (true or false) and not an exception which is thrown by the SecurityManager. 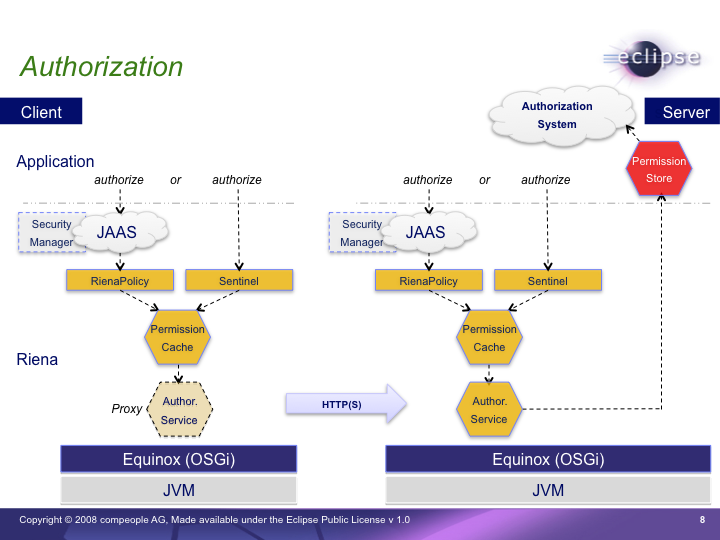