Is this needed in this tutorial? Not sure how this is done for M4 cause of the namespace problems (updatesite/target/CVS?) B.muskalla.gmx.net

Setup of the example RCP application

We will use the RCP Mail Example provided by the PDE team to show you the details of such a migration. To create the RCP Mail example, click on File | New | Project... and select Plug-in Project. We will give it the name "org.eclipse.rap.demo.mail" but you can also choose your own. Click on Next > to modify the existing plug-in settings. Be sure to have the This plug-in will make contributions to the UI checkbox checked and that you Would like to create a rich client application (see screenshot "New Project Wizard"). On the next page select the "RCP Mail Template" and click the Finish button.

Clicking on the "Launch an Eclipse application" link of your Plugin Manifest Editor which opened immediately after project creation should result in an RCP application the one shown in "RCP Mail Example". 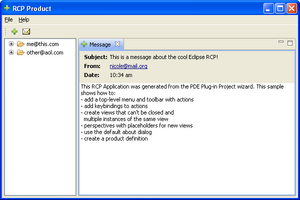 As the nature of RAP requires a little but different startup of the application, just delete the extension of org.eclipse.core.runtime.applications on your "Extensions" tab. If you like, you can also remove the according Application.java from your project.

To define a new entrypoint, add a new extension for the org.eclipse.rap.ui.workbench.entrypoint extension point. As paramater we will define "default" that our mail example is the default application in the running enviroment later on.

As class you can create a new one which implements the IEntryPoint interface. Look at the following code how we could implement it:

One last thing is to do: We currently don't support to open more than one workbench window we will just comment out this feature in the mail example. Here are the lines we don't need: