< Papyrus‎ | Papyrus Developer Guide
Revision as of 05:24, 20 May 2015 by Quentin.lemenez.cea.fr (Talk | contribs) (Created page with "== Requirements to manage a build == * be a Papyrus committer (of course) * have a non-restricted shell access to build.eclipse.org (log a bug to Community/Server to obtain...")
(diff) ← Older revision | Latest revision (diff) | Newer revision → (diff)

Requirements to manage a build

To run scripts that access the build.eclipse.org server without having to type the ssh password for each operation, you can use ssh-keygen to create a key and put your public key "~/.ssh/id_rsa.pub" in "~/.ssh/authorized_keys" (see this documentation). 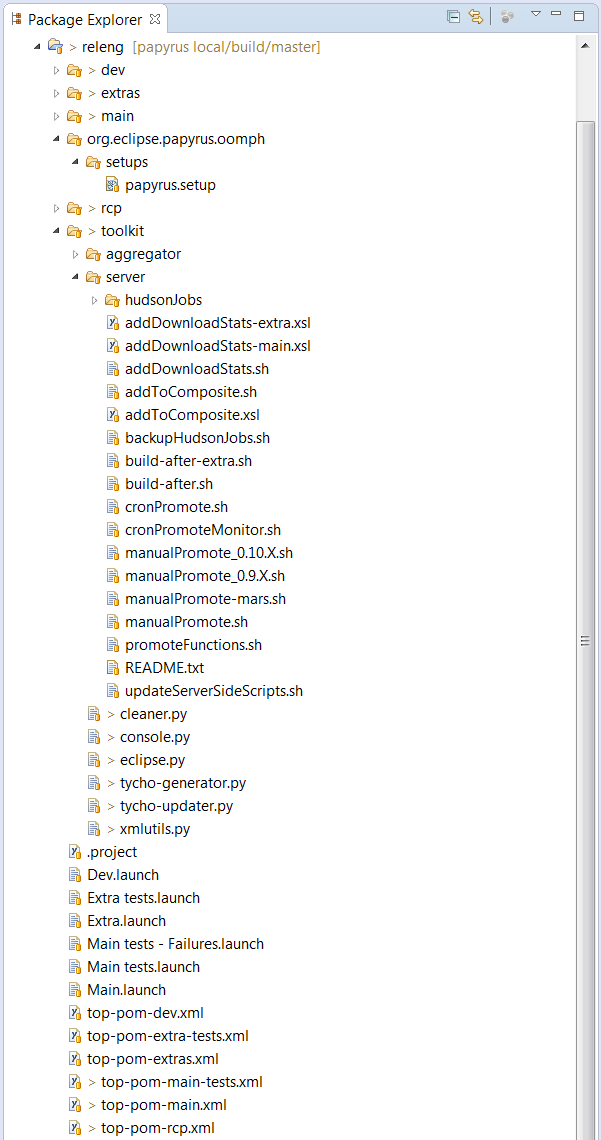 It contains sub-folders corresponding to each build:

And each folder contains the configuration for that build:

And these scripts are common to all the builds:

Taking the example of the job papyrus-trunk-nightly:

The test builds do one more step: they run the tests using the Buckminster test command, using an Eclipse launch configuration that references the tests to run.

The feature org.eclipse.papyrus.build.feature is not visible on the Papyrus Update Site. It is only useful for the Buckminster build. It contains the main Papyrus features :

The feature org.eclipse.papyrus.sdk.feature allows to provide the Papyrus binaries on the Update Site. This feature aggregates all the main Papyrus features. 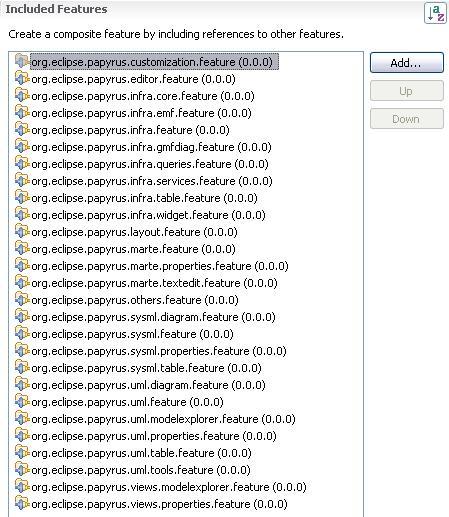 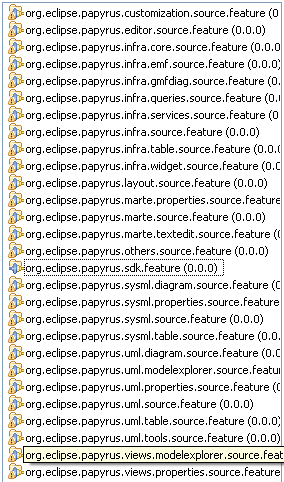 Automatic publishing to the downloads server

configuration of the cron script

The publishing script is started every five minutes ("*/5") to see if there are new builds to publish and publish them.

Type this command to edit your crontab on build.eclipse.org:

Then put this single line in the file to start the publishing script every five minutes: 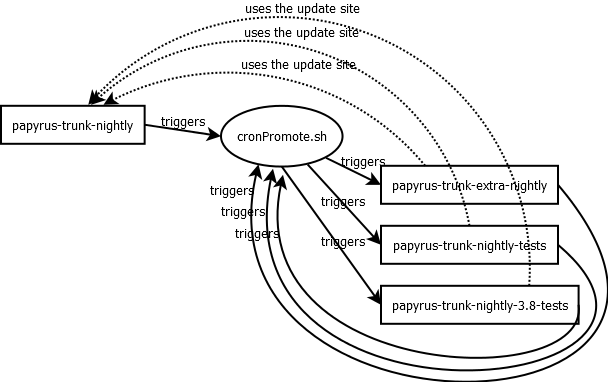 The dependency appears in the rmap:

And the variable "papyrus.update.site" is defined in the Hudson job configuration:

If you don't know where a particular plug-in or feature is located, the easiest way to find it is to search the Eclipse download area using "find" on build.eclipse.org. For example, to look for "org.eclipse.emf.compare" :

Publishing a build in the aggregator

The Eclipse simultaneous release train is built with the B3 aggregator. To be part of the aggregation, you must add your contribution to the aggregation model.

First, you need to install the B3 aggregator. Theoretically, you can edit the model with any text editor, but it is better to edit it with the B3 editor, which will check that your model is valid.

It is suggested that you install the B3 aggregator in a separate Eclipse, dedicated to releng activities. For the Indigo and Juno simultaneous releases, you will need two different B3 installations :

It is important to use the right version for each, because you will break the build if you commit changes that depend on the wrong version.

The people responsible for the build should be listed as contacts in the build model: 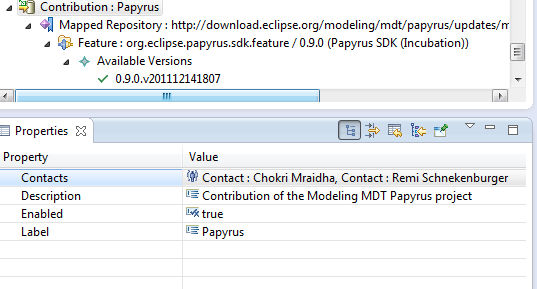 What do you select in your build.properties files ?

The Buckminster import is very slow (more than one hour and a half) when it does the SVN checkout itself. To optimize it, we let Hudson do the checkout, and we then tell Buckminster to use the locally checked out files.

So, instead of this configuration in the rmap:

We now use the "local" reader:

"p2.timestamp" is the Unix date in milliseconds, which must be udpated everytime you change the compositeArtifacts.xml or compositeContent.xml files. To obtain the right value, use the command:

You can also make a composite child point to a different location. This is useful for moving update sites to archive.eclipse.org transparently (see bug 349141).

The Papyrus update sites are under:

corresponding to this directory mounted on build.eclipse.org:

The statistics are enabled on repositories that are published with manualPromote.sh. This script calls addDownloadStats.sh, and it uses:

These XSL transformations add the property "p2.statsURI" to the update site metadata, and add a "download.stats" property on a few bundles that are significant for the project's statistics.

The download.eclipse.org server only has so much space. So, the webmaster set a 2 GiB quota per project.

To stay under this limit, old builds should be either deleted or moved to archive.eclipse.org.

Promoting a RC to a release

For example, copy the contents of: 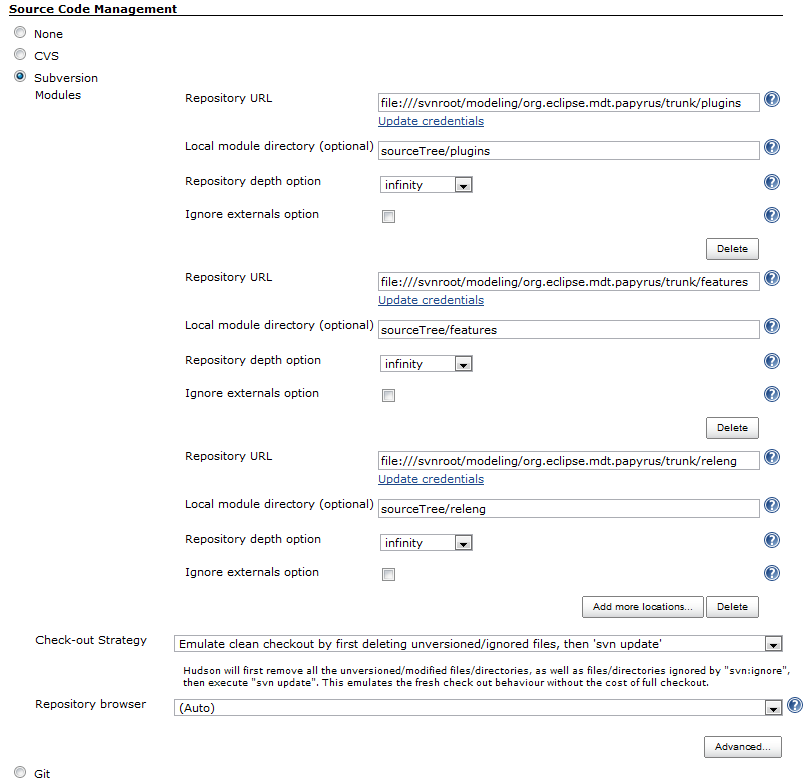 The error can sometimes be found at the end of the log, but is often burried deep within megabytes of output (especially when Buckminster is run with the DEBUG log level). So, to find an error, you can search for patterns:

It means that the import phase done by Buckminster failed because Buckminster could not find plug-in "org.eclipse.xyz" in the rmap. If this is one of your plug-ins, you can fix this error by:

If this is a plug-in from another project you depend on, you can fix this error by:

Notice the "[0009]" tag before the error message: it refers to more information at the end of the build log. Search for this number, and you will find something like:

It gives you the dependency chain leading to the plug-in that cannot be resolved.

This is a Java compilation error.

When you see this error message, it means the tests failed to start. This is most often because one of the test plug-ins could not be resolved. To get more information about this problem, you can look in the Hudson workspace:

Then look at the messages that follow, and you should see:

Once you have found the root dependency that is not resolved, then you can:

Sometimes, the error message says that the tests failed to launch, and to "see the log", but it doesn't indicate which log. The log for a launch failure is located in:

You can see the contents of the Hudson build's workspace on Hudson. For example:

At the end of the build, the Hudson workspace contains these files:

The page for each project's simultaneous release is usually:

It contains the date each milestone is expected to be available, depending on whether the project has a +0, +1, +2 or +3 offset. Each project determines its offset depending on its dependencies : if it depends on +2 projects, then it should be +3. And if it depends on +3 projects, then it is still +3, because there is no +4 offset. In this case, communication between the projects is essential, to make sure that each build depends on the right version of its dependencies.

Each project in the simultaneous release should also respect:

As the time for the big release in june each year approaches, each project in the simultaneous release must keep informed about the plan for the release, and perform some actions at the right time to ensure the release goes smoothly (such as cleaning up, archiving, publishing the documentation, putting the release bits in the right place for mirroring, etc.).

This is documented in a page conventionally named:

It is also very important to read the cross-project-issues-dev mailing list regularly, to stay informed about everything concerning the simultaneous release.

You should indicate that your project follows the Eclipse Train. Go to the Eclipse portal [2]. In Eclipse Projects, click on view : 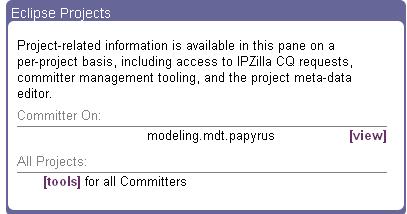 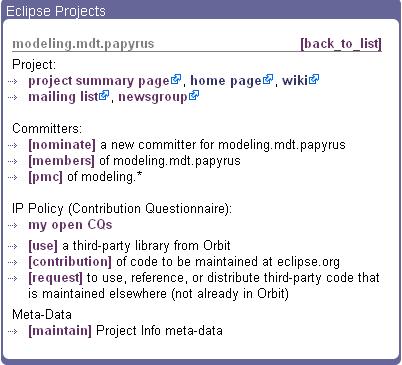 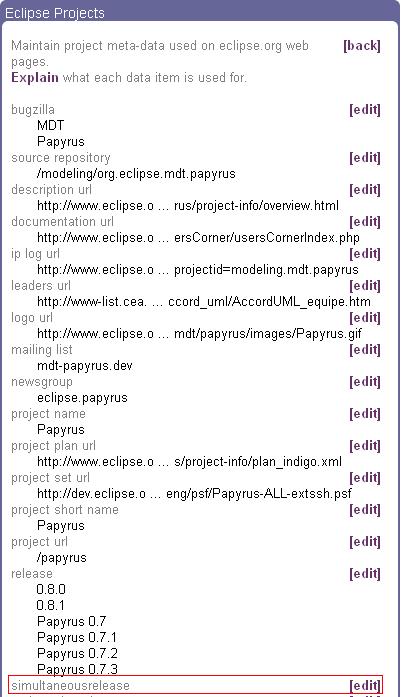 add 1 to your new release

You must respect the rules for being part of the simultaneous release, and fill in metadata on the portal. Most of this metadata is to document your compliance with the rules. If you don't comply with some rules, you should explain why, either with an in-place explanation if appropriate, or by linking to a web page with more information.