Qompass designer for Papyrus comes with a set of examples. All of these can be accessed via File->New->Example and the category Papyrus examples. A hosting project must already exist.

All examples contain embedded comments. In the sequel, we go through some of the examples, starting with a simple HelloWorld program based on Qompass.

In the sequel, we outline a simple hello world example using qompass designer. Please note that the example can be found via File->New->Example in the category Qompass examples. There are also two cheat-sheets that explain how to create your own example from scratch.

As for all Qompass examples, there are three different parts that needs to be modeled

In the sequel, we will go through all of these items with a focus on the the definition of the software components.

The example consists of two components, detailed below

The hello-world component is shown in the following screen shot.

The hello world component inherits from a component called CStart. This is an abstract component defined in the Qompass core model library. It owns a port (called start) that provides the pre-defined interface IStart. This interface has a single operation run. Components that provide an interface via a port need to implement this interface. This include ports that are inherited. In our case, the hello world component needs to implement the IStart interface, i.e. contain an operation "run" as well as a behavior for this operation.
Qompass supports the user by automatically creating derived operations for interfaceS provided via a port, i.e. the operation signature is copied (and synchronized on demand) from the interface. The developer needs to provide behavior. In UML, behavior can be specified either via activities or by embedding code in a programming language (opaque behavior) into the model. Currently, Qompass focuses on the latter,in particular in form of embedded C++ code. A simple C/C++ view allows to enter the code, as shown in the following screenshot (there is ongoing work concerning a CDT editor integration)

The code outputs "Hello World" and an additional message that is an attribute of the hello world component. The attribute message is declared as a UML String, but it does not have a particular contents on the level of the component definition. We will see in the section explaining deployment plans how this contents can be defined.

The specific start port enables a component to get the initial control. Its run operation is called at system start-up by a generated boot-loader.

All Qompass applications need to define a top-level component, typically called System that aggregates its components, in our case the hello-world component. It is defined by means of a composite class, contained components are modeled via attributes (use composite aggregation for these) typed by the contained components. Note that we define a role (or part) within a composition, the hello world component declaration is not part of the system class. This role corresponds to an instance of a class in the deployment plan below.
In our simple hello world example, there is a single component only. Thus, there are no connections between components (so called assembly). Take a look at the producer-consumer example to see how the assembly can be done. 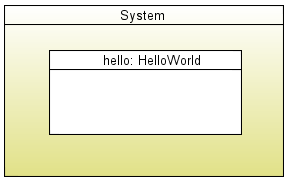 Definition of an abstract hardware platform

The hardware model has a quite similar structure compared to the software components: A component representing the hardware architecture contains a single node (called MonoNode) on which we want to deploy our Hello World component.

The main objective of this step is to define computational nodes on which the software can be allocated. A node is-a stereotyped class that defines for the moment only quite basic information about a computational node, such as the provided memory and operating system.

The following screenshot defines a platform for the Hello World component. The HWArchitecture class has a similar function for the platform as the System class has for the software: it represents the used notes and their interconnections. In this simple example, the hardware architecture contains a single node.

A platform for the Hello World component

Definition of a deployment plan

A deployment plan is a collection of instance specifications, stored within a UML package. It has two objectives. The first is to configure an instance of a component, i.e. to provide values for configuration attributes. The second is to allocate instance to processing resources such as threads or directly to a node of the platform definition. 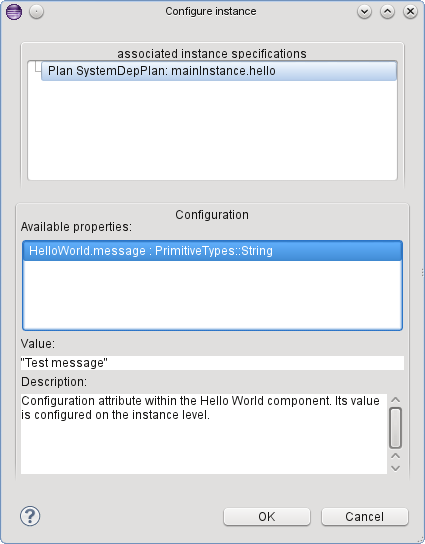 The allocation is also simplified by means of a custom dialog. The instances of a system are shown by means of a tree structure and the user can either allocate leafs or a parent node. In our case, the whole system should be allocated to node "monoNode", as shown in the screenshot below. On the model level, allocation is a MARTE relationship.

The last screenshot shows the resulting deployment plan, the package containing two instance specifications and the slots along with the configured values. You also see the allocation of the system component. Note, that the visualization of all instances in a diagram is often not useful for larger applications, since the graphical visualization does not provide additional information compared to the tree structure depicted by the dedicated dialog.

Use the "Run as->Local C++ application" menu entry to execute the sample application. You should see the text "Hello World: Test message".

If the compilation run fine and you do not see screen output, have a look at the troubleshooting section.

The producer consumer example consists of two interacting components that are part of the obligatory system component. These components communicate in a data flow style in two different variants. In the first, the (data) consumer is invoked from the environment to push new data. In the second, the consumer component asks for new data. Therefore, the two different variants are denoted as Push and Pull-Consumer respectively.

The flow-port characteristic is specified by means of the port-kind attribute within the FCM profile. The port kind is associated with mapping rules that determine which interfaces must be implemented by a port (derived provided) and which interfaces can be called through a port. In case of the data-flow ports, the ports correspond

In the push variant, the producer can directly call the push operation that is provided by a consumer. In case of the pull variant, both components call operations to obtain data. Thus, an additional component is needed in order to implement the interaction. In case of the example, this is a FIFO queue that provides suitable ports for the consumer and producer.

The hardware architecture is unchanged compared to the Hello world example