Difference between revisions of "Papyrus/Designer/connector-container"

The connector pattern is based on the idea of Garlan and Shaw that a realization of an interaction must be a first class citizen of the application model. It must be possible that an interaction - like an application component - has multiple realizations and can be configured. The idea of connectors has been formalized in the context of UML in Robert et. al 2005

The container pattern may be used to modify the way a component interacts with its environment. This pattern has been identified by existing middleware solutions, such as CCM and Fractal. The container encapsulates an object (component) and can provide additional service and observer or manipulate the interactions with the component. In order to enhance flexibility (and readability) of the application model, it is preferable to add information about the container (in form of rules) to the model, but not the container itself. Thus, a transformation step adds the container to the model.

The right side of the Figure above shows this principle: a component "C" is enriched with rules to apply. This information is evaluated by a transformation that creates the container and adds the elements that are associated with the rule. The component becomes an executor, i.e the business code behind a component. It is possible to distinguish two different types of elements within the container: the interceptor and the extensions. The interceptor is placed on a delegation connection between a port of the container and the executor. The extension is an additional element which can be connected with external ports of the container. 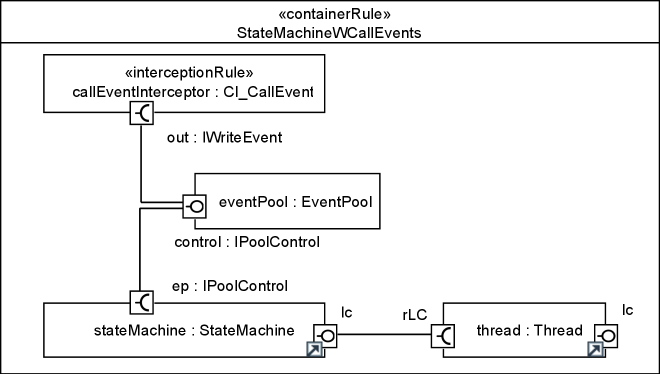 Container rule for a state machine

The current container libraries offer for instance the production of execution traces or the realization of mutual access. An interesting feature is the support for state-machines. Its realization requires three elements within the container: the state-machine itself, an event pool and an interceptor which feeds the pool (e.g. each time an operation is called, an associated call event is produced). These elements are captured by the rule shown in the Figure above.

The following code fragment describes the template of an operation which manages the execution of a state-machine. The code, here using the C++ language, is modeled by an UML opaque behavior. The access to the model element is embedded between [ and /], i.e. [name/] allows to access the name of a UML element. This excerpt shows the power to adapt the behavior of embedded components via the container to add new functionality that is well separated of the business code.

The instantiation of the template with a fictive class "A" is shown in the next code fragment. This class contains a state machine with the state "state1", which appears in the code's "switch" statement. In each state, the events defined as triggers for transitions are compared with the event read from the pool (in which a timer or interceptor write).

This page was last modified 04:03, 8 April 2016 by Francois Le Fevre. Based on work by Ansgar Radermacher.