Difference between revisions of "PTP/photran/documentation/photran5advanced"

Photran 5.0 includes a number of sophisticated features that are designed to make it easier to write, modify, search, and maintain Fortran code. These include content assist, which can "auto-complete" variable and function names as you type; a declaration view, which can show the leading comments for the selected variable or procedure; Fortran Search, which allows you to find declarations and references to modules, variables, procedures, etc.; and refactorings, which change your source code to improve its design while preserving its behavior.

In order to use any of the advanced features described in this document, you must specifically enable them as described below. After you do this, Photran will index your project; that is, it will build a database of what modules, subprograms, etc. are declared in every file in your project. This information will be updated incrementally every time you save a file. Although this process is usually reasonably fast, it may become disruptive when working on very large projects, so it has been disabled by default. Note that the first time your project is indexed, it may take a while, because Photran must analyze every file in your project; after that, it will only index files that have changed (and files that depend on a file that has changed), so it will generally be much faster.

How to Enable Advanced Features

Setting Module and Include Paths

If your source code contains INCLUDE lines or USE lines referencing modules in other files, Photran needs to know where to look in order to find these. It will not figure this out automatically. For each project in which you plan to use refactoring support, 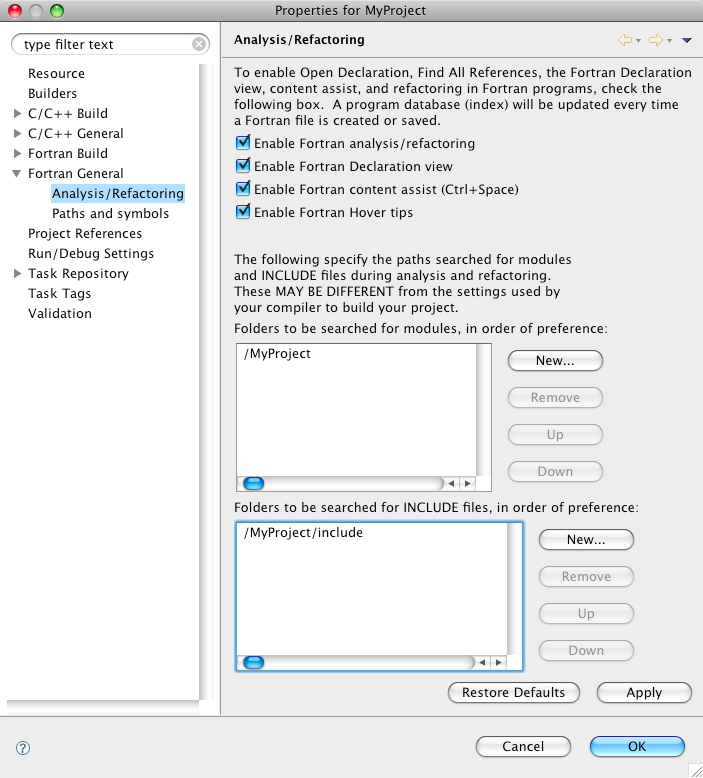 As you are typing a Fortran program, content assist pops up a list of the subprograms, variables, intrinsics, etc. that are in scope. It is invoked by pressing Ctrl+Space. As you start typing a name, the list is refined based on what you have typed; you can then use the arrow keys to choose from the list and press Enter to complete the definition. Content assist is useful when you don't remember the exact name of a function, or when a function has a long name and you don't want to type all of it. An example is shown below. 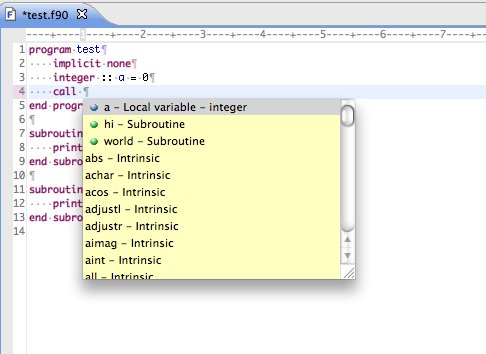 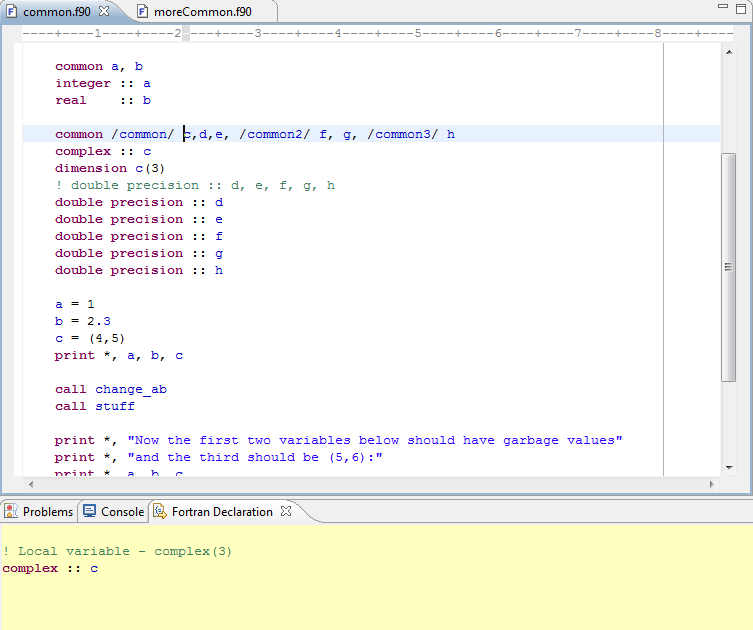 Hover tips display the same text as the Fortran Declaration view (described above); however, they display it in a popup window when the mouse cursor is hovered over an identifier. 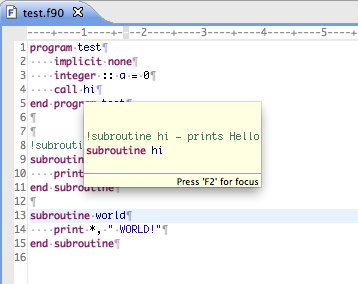 The Open Declaration command allows you to quickly find the declaration of a particular variable or subprogram. In the Fortran editor, click on (or select) an identifier. Then either

Fortran Search is a syntax-aware, multi-file search tool. Unlike textual searches, Fortran Search "understands" Fortran programs. It is used to search for a particular type of declaration (e.g., only modules, or only subroutines), or it can find all of the uses of a particular variable or subroutine. It also allows to you to limit the scope of the search (e.g., it can search every file in the workspace, or just a particular project).

In order to use Fortran Search, click on the Search menu and select Fortran... 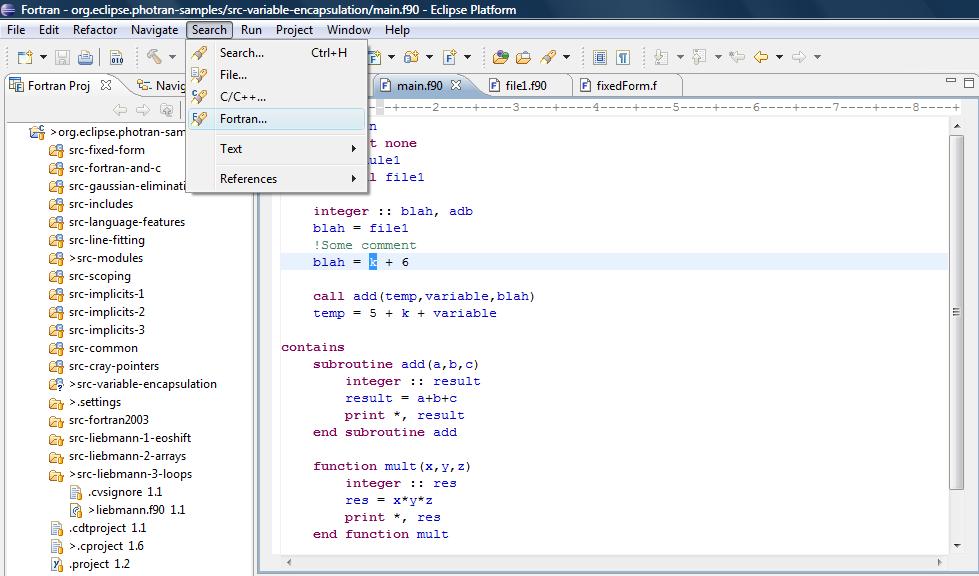 This will open the Eclipse Search dialog, and the Fortran tab will be active. There, you can specify several things: 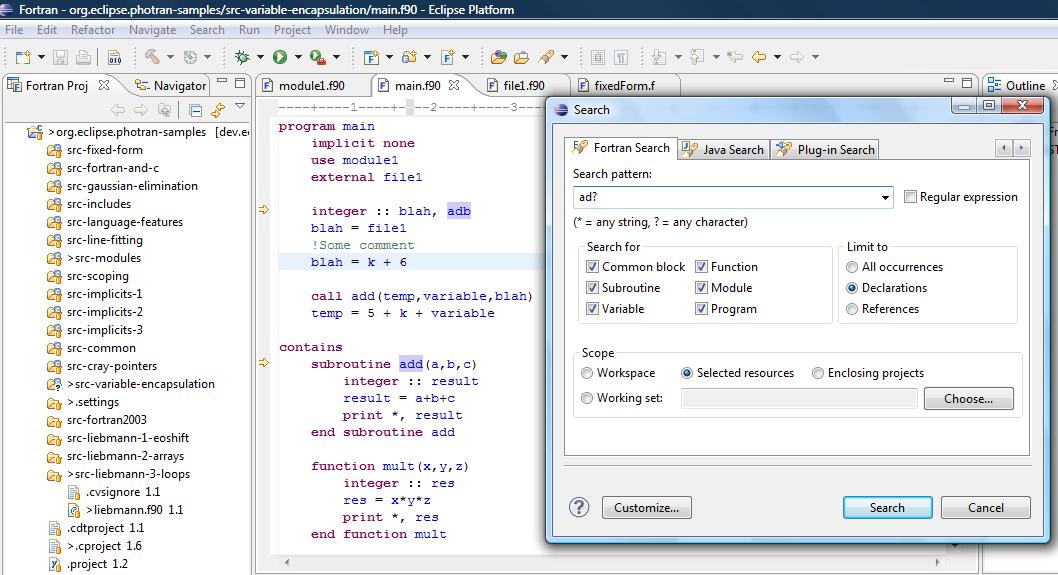 Notice that only the declarations of variables/functions were found. Also note the use of the wild-card character(?) in the search box

Refactorings are changes to a program that improve its internal design but do not change its behavior. These include minor, coding style changes (like using IMPLICIT NONE statements), code readability improvements (like replacing a variable named N with one called NUM_POINTS), performance improvements (like interchanging loops under certain conditions), and even larger-scale design changes (like moving a procedure from one module to another).

Although these types of changes can be done by hand, making them is often tedious and error-prone. Photran automates many such refactorings. For example, the Refactor > Rename command can automatically locate the declaration(s) and uses of a particular subroutine, and change its name in all of those locations. It is "smart," too; if there is a subroutine named d and a variable named d in a different context, it won't confuse the two. Moreover, before making such a change, Photran will attempt to verify that the change is safe to make. For example, a subroutine A cannot be renamed to B if there is already a variable named B in a context where that subroutine is called.

Some refactorings (such as Introduce Implicit None and Replace Obsolete Operators) can be applied to several files at once. As described below, this involves selecting one or more files in the Fortran Projects view, then right-clicking on any of the selected filenames and choosing Refactor from the popup menu.

Caution: Photran can only refactor free-format Fortran source code. It is not possible to refactor fixed-form code. Make sure that only free-form Fortran files are selected. The Refactor menu may not be available if any of the files are fixed-form or non-Fortran files.

1. If a variable is used as a parameter to a function/subroutine call, and that function changes the value of the variable as a side-effect, that change will not be preserved.

1. In order for refactoring to work correctly, there must be no statements before the second loop. If such statements exist, correctness of the refactoring is not guaranteed.

Add ONLY Clause to USE Statement 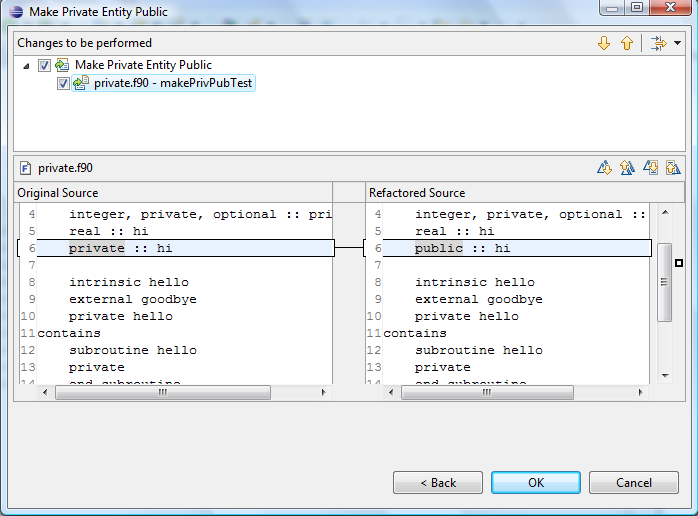 This page was last modified 14:07, 15 March 2010 by Jeffrey Overbey. Based on work by Kurt Hendle, Timofey Yuvashev and Stas Negara.