The tool takes a "source" and creates API snapshot from it. The tool use OSGi bundle(s), RCP product, or Java JAR(s) as a "source".

The snapshot is an XML file that is stored in the file system. Another version of the "source" can be compared to the snapshot to detect API changes.

For example, using this tool Eclipse SDK 3.2 can be compared to the version 3.3 to detect incompatible changes, produce skeletons for "what’s new" reports, and check to see if versions of bundles have been properly incremented.

The tool supports "exclusion" mechanism that allows known problems to be omitted from the reports. The exclusion files follow the same format as XML API reports and, in fact, are expected to be produced from the reports by users.

The tool can be run both from Eclipse and in a headless mode.

The tool received a moderate amount of testing and is ready to be used.

At present directory on the file system as used as a repository for API snapshots. This approach is fine for a small workgroup, but something more scalable (like an SQL database) eventually will be needed to store API snapshots

The API description is being extracted from .class file. Alternatively, a module could be added to collect it from JDT model.

Fine-grained rules: A number of places in Eclipse have fine-grained API usage rules. Most common example would be API interfaces. A number of them has text in Javadoc declaring that users should not implement those interfaces. As such, adding methods to those interfaces is not a breaking change from Eclipse view point, but the tool has no way to detect such fine grained restrictions. A possible solution would be usage of new Javadoc tags to provide this information in a standard way. 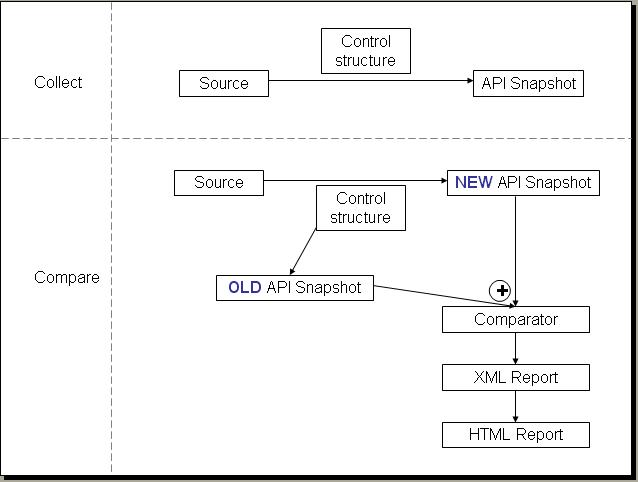 At present code is contained in 3 bundles:

The bundles contain code for both API comparison tool and reference extraction tool.

The classes SnapshotOperationsBundle and SnapshotOperations from the "core" bundle provide access points for the UI and headless invocations. The information on the source code to be processed and processing options is passed via IApiControl structure.

The "core" bundle contains specialized parser for .class files that allows us to extract only information needed by API tools. As the parser bypasses most of the information in the .class files, parsing is rather efficient.

From the view point of the tool, the source code it is processing is organized in containers (IApiContainer). Containers have a unique string ID, version, and location. ID and version are persisted in the repository when information is written out; location only there while API collection takes place. IApiContainer structures that could be used to represent individual OSGi bundles, Java JARs or directories that contain source code. See classes SourceContainerBundle and SourceContainer.

The bundle version uses information contained in the manifest.mf files. To obtain it, it relies on the internal PDEState helper class from PDE Core.

Collector processes all classes contained in containers in three steps:

Classes in the package "org.eclipse.pde.api.tools.internal.model" used to store Java model read from .class files in memory.

Class ApiSnapshot contains all the information along with helper methods to simplify access to the containers. ApiContainer along with ID and version has a list of API classes and interfaces. All those classes have methods to support storage of contained information in XML format.

IApiRepository describes an interface to the repository for API snapshots. At present, it only implemented to allow snapshots be stored in a directory on a file system; however, as may other pieces, it is designed to be pluggable.

If match is found, ApiElement diff(ApiElement newElement, DiffContext context) method is called. The method is present on all levels if API elements and is called recursively to produce ApiElement that contain only differences between "old" and "new" elements. Method will return null if no differences are found.

At each level differences are aggregated. For example, processing for the class will find class-specific differences (visibility, inheritance chain) and will include differences of methods and fields contained by the class.

If full processing is requested, comparison is run twice swapping "old" and "new" snapshots. The second pass is used to identify "added" non-breaking changed. Information on the current state comparison passed around in the DiffContext class.

The result of both comparisons are stored in the ApiComparisonResult which passed to report generation routines.

The XML report generation utilizes ability of ApiElement’s create XML output. As ApiComparisonResult contains only elements that changed, writing it out produces ready (but hard to read) report on changes. To produce easy-to-read report, XSLT Ant task is used to convert XML report into HTML. The report/format.xslt file contains processing instruction and styles are stored in the report/style.css file (see ComparisonHtmlReport).