Every plugin must minimally include the following JavaScript library: plugin.js

If you're authoring a plugin that will use Object References, you must load an additional script, Deferred.js. Your script section would then look like this:

The plugin we construct in this tutorial does not use Object References, so just plugin.js will suffice.

So you got a Plugin handshake timeout or similar error while trying to install a plugin? Try these troubleshooting tips:

Check that the plugin URL can be loaded.
Open the plugin's URL in a web browser -- does the page load correctly? If it 404s, it will fail to install into Orion as a plugin.

Check for errors in the plugin.
Load the plugin's URL in a web browser, then open your browser's developer console. Look for any script errors or missing resources. Is the required library plugin.js loaded correctly? Any of these failures can cause the plugin to fail to handshake with Orion.

Check that the plugin is connecting to the framework.
To call back to Orion at installation time, the plugin must invoke the PluginProvider.connect() method. Load the plugin's URL in a web browser, and use a breakpoint (or console.log()) to ensure that the .connect() method is actually getting called. 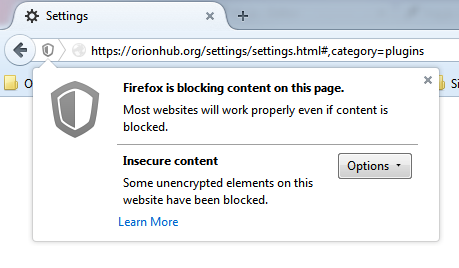 There are a few ways to resolve this problem:

https://orion-plugins.github.io/0.5/plugins/beautify/jsbeautify.html
Contributes a "Beautify JS" button to the editor toolbar by using the orion.edit.command service type.

Visit orion-plugins.github.io for a directory of Orion plugins that you can install and view the source of.

This page was last modified 14:39, 13 September 2016 by Amr Mourad. Based on work by Mark Macdonald, Max Rydahl Andersen and Mark Macdonald and others.