A plugin is an HTML file containing some JavaScript that knows how to connect to the Orion client. Plugins can be hosted on any web server and installed into Orion using their URL.

In order to be useful, a plugin should provide one or more services. When Orion needs a service contributed by a plugin, it loads the plugin inside an IFrame.

Orion currently supports a small set of extension points: service types that plugins can contribute to, in order to customize the client and add more functionality. These include things like:

Every plugin must include the following JavaScript library:

What we have now isn't a plugin yet. It's just a bare-bones HTML file. The next step is to include the API we'll need to talk to Orion. Grab the plugin.js file (see What you need) and put it in the same folder as reversePlugin.html. Then add this inside the <head> tags of the HTML file:

Next, we'll add some code that exposes a service to Orion. Add the following, again inside the <head> tags:

Now we're going to create and register a service with the "orion.edit.command" service type. Add the bold lines as shown:

Let's go over what we have now: 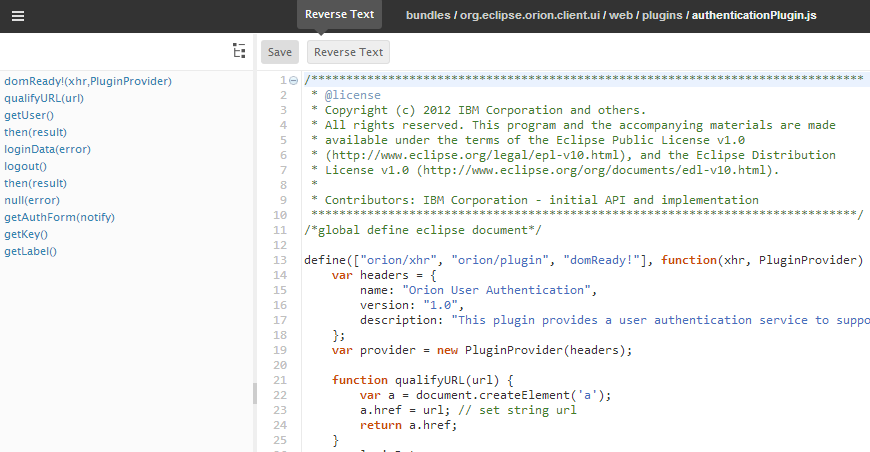 http://mamacdon.github.com/0.2/plugins/uglify/uglify-plugin.html
Contributes an "Uglify JS" (minify, in other words) button to the editor toolbar by using the orion.edit.command service type.