The Model Discovery (MoDisco) Component: A Proposal to promote the project in Eclipse/Modeling Component 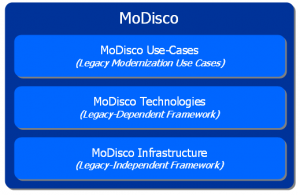 Principles of model discovery are based on a metamodel-driven approach (see Figure 1). It means that every step is guided by a metamodel. Thus, the very first step of a model discovery process is always to define the metamodel corresponding to the models you want to discover. This step is common to all kinds of systems. Model

The MoDisco framework is a generic framework that provides a basis for extension. It offers a minimum tool set to allow model discovery. The first component is a base metamodel. It is based on the Knowledge Discovery Metamodel (KDM) from the OMG. Actually, it is a minimal subset of KDM allowing end users to define (by extension) some KDM compliant metamodels. The framework offers facilities to manipulate models which metamodels are extensions of the base metamodel. As we already said, the framework is designed to be extended. A MoDisco extension is a couple of base metamodel’s extension and plugin. This couple is called a “blade”. Those blades have a specific domain of discovery, for instances Unix files system discovery, Cobol system cartography, 4GL source code cartography, etc. The global extension mechanism will be based on model extension concepts applied to metamodel (to be defined) and Eclipse plugins mechanism. The couple of extension points provided by the MoDisco framework will build the blades’ sleeve. A graphical overview of the MoDisco component is provided in Figure 5.

In addition, MoDisco will not only be a programming framework. It will define a methodology to help users to build extensions. For instance, the fact of having a system classification and a methodology for each system type would be crucial for its adoption.

We propose that the MoDisco component be undertaken as part of Eclipse Modeling Project (EMP)/Generative Modeling Technologies (GMT). The initial list of committers, contributors and interested parties will be completed and provided later. MoDisco is supported by the ModelPlex European Integrated Project (FP6-IP #034081). A first prototype implementation of the basic framework is currently under development and will be contributed as soon as possible. Several white papers will also be provided illustrating various possible applications of the MoDisco tools.