The CSharp metamodel is the reflection of the C# language, as defined in version 2.0 of "C# Language Specification" from Microsoft Corporation.

The CSharp metamodel contains 81 metaclasses. To better understand it, this page will introduce the main features (metaclasses and links).

You could also browse the model definition csharp.ecore available in sources (see the install section).

Every metaclass (except metaclass Fragment) inherits from ASTNode. As its name indicates, ASTNode represents a graph node. ASTNode has a reference to metaclass Comment because almost every csharp element could be associated to a comment (block or line comment). 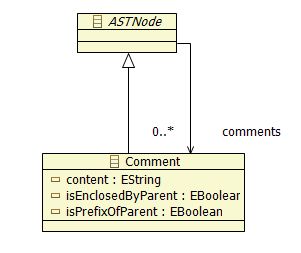 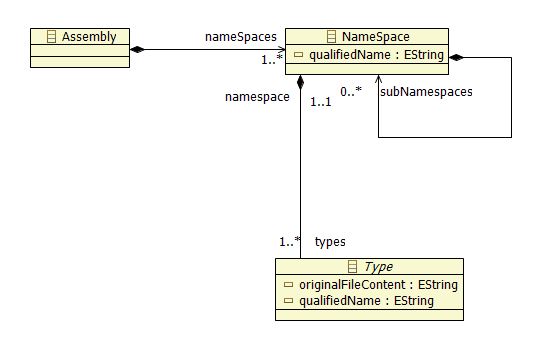 A lot of csharp elements are "named", and this name can be considered as an identifier : methods, packages, types, variables, fields, ... So all the corresponding metaclasses inherit from the NamedElement metaclass. It will be useful to resolve references in binding, see the NamedElementRef metaclass.

Another goal of this metaclass is to indicate for each element whether it is part of the current csharp application or not (element from an external .NET library). So external elements are tagged as proxy through a dedicated attribute and can be easily filtered. For example, instruction "Trace.WriteLine" has been decomposed into two named elements (one class and one method) the definitions of which are not part of the current csharp application. So attribute proxy of these elements has been initialized to true.

To represent links between csharp elements, as the C# AST defines only string references, metaclass NamedElementRef initially contained only this information. But an important addition was to resolve bindings between elements, so it is actually possible to navigate directly through the elements graph. It has been represented as a relationship from a NamedElementRef to a NamedElement (proxy or not).

Like in many languages, the concept of expression exists in C# : it is a portion of code, without declarations, and its evaluation returns a value, numerical or boolean or other ...

For example, is an expression and will be translated into the concept of InfixExpression metaclass.

All types of expressions shall inherit from metaclass Expression.

An "instruction" in C# is represented by the Statement metaclass. A block of code (Block metaclass) contains a collection of statements, and a block of code may be contained by a method.

Some examples of statements in C# :

A first version of the C# discoverer : CSharpDiscoverer

This page was last modified 04:44, 13 January 2010 by Nicolas Bros. Based on work by Frederic Madiot and Gabriel.