Who is this FAQ for?

This FAQ is for the JDT/Core committers, and anyone who is willing to participate in the development of JDT/Core.

What is this FAQ about?

This FAQ is about the rules that JDT/Core committers follow when developing the JDT/Core component.

How do I contribute to this FAQ?

What should I do after contributing to this FAQ?

You should send a message to jdt-core-dev@eclipse.org with the diff url (e.g. http://wiki.eclipse.org/index.php?title=JDT_Core_Committer_FAQ&diff=50788&oldid=50780) so that every JDT/Core committer is aware of the change.

Where is the JDT/Core code?

All the JDT/Core code is in the Eclipse GIT repository. You need to check out the following projects from git://git.eclipse.org/gitroot/jdt/eclipse.jdt.core.git

This project needs to be checked out from git://git.eclipse.org/gitroot/jdt/eclipse.jdt.core.binaries.git

This project needs to be checked out from git://git.eclipse.org/gitroot/platform/eclipse.platform.releng.git

How do I create a Git repository connection?

Go through http://wiki.eclipse.org/Platform-releng/Git_Workflows to see how to set up Egit and create repository connections. If you're not a committer you should use http instead of ssh, with user id as 'anonymous' and password left blank.

What branch should I use?

Getting the code is the first and the biggest step, but there are a few more steps

How should I format my code?

We currently don't have a formatter profile available. But the rule is that you should try to format your code as the surrounding code. If you are not sure, use the Eclipse [built-in] formatter profile which is very close to the JDT/Core team's formatting style. Always follow the Eclipse Platform's Standards, Conventions and Guidelines,

Testing is imperative to the health of the project. We have a significant amount of tests. The quantity of tests will keep growing as more functionality is added to JDT Core. If you are contributing a fix or writing an enhancement, it is a requirement that tests are written. If you don't write them a committer will have to and that could slow down the contribution process.

There are a few things that you should know about our testing process:

What should I do before committing a fix?

What if another committer makes changes in my code?

Each committer is responsible for checking incoming changes in his/her own code. So if another committer makes changes in your code, you should make sure that the change is correct when pulling from the GIT repository.

What should I do to backport a fix?

When a bug is fixed in master, it is sometimes interesting (or necessary) to backport the fix to the maintenance branch. The fix needs first to be modified in order to be applied on top of the maintenance branch's code. It may be easy or tricky depending on how the patch's code area has been touched in the branch.

The bug is either in RESOLVED/FIXED or VERIFIED/FIXED state, which means respectively either in State 2 or in State 2.1 according to the JDT/Core bug life cycle.

So depending of that state, when the fix is ready, you have to:

How do I maintain the build notes?

The build notes (in org.eclipse.jdt.core/buildnotes_jdt-core.html) should be updated just before committing a bug fix. This file should be committed at the same time as the bug fix. To update the build notes, use the JDT/Core tool (right click on the file, then JDT Core tools > Add to build note...).

If a new API was added, then it should be clearly mentioned along with its doc in the build notes.

The comment of a commit should be of the form: fixed bug <bug number with summary>, e.g.

Can I release code during the milestone week?

Initial answer is: NO

The milestone stream has to stay clean until the milestone is declared. Then, we would be able to fix a stop shipping bug and contribute again without introducing any other changes since the verification process.

However, looking at milestone history, re-contributing seldom happened, so if this is really necessary and only for master branch, code releases are allowed if the verification process has well finished and the stream reopened for development.

See also What should I do if I need to contribute after the verification was finished? question...

Can I release code during the build input?

Again, the answer is: NO

The development stream also needs to stay clean during the build input process. The build input can start between 1.30 AM EST to 5 AM EST on the day of the build input and it ends when "Released v_XXX for today's build input" message is sent on jdt-core-dev@eclipse.dev mailing list.

How do I warn users after I changed the build state version or the index file version?

What are the rules to release code in the maintenance branch?

You should not start on a fix in maintenance branch (either specific or backport from master) before having got the +1 from the JDT/Core lead added as a comment in the corresponding bug. Then, when the fix is ready, it must be attached to the bug (as usual) and be reviewed by another JDT developer. No code should be released in the maintenance branch without these two conditions verified.

What is the JDT/Core bugs life cycle?

Note: A bug in the jdt-core-triaged inbox means that it is open to contributions from anyone who wants to take a shot at fixing it. If you want to contribute to such a bug, please leave a comment showing your interest in doing so, or if you're a committer, assign the bug to yourself.

When a person is assigned as the QA contact for a bug:

Here's the diagram for the main states of the JDT/Core bug life cycle: 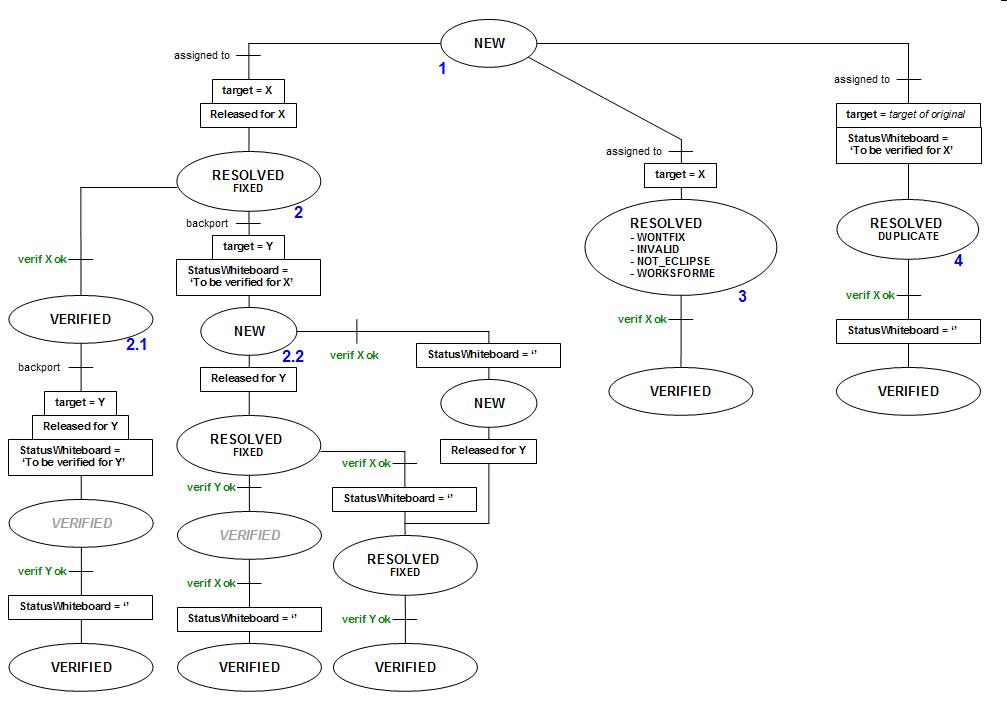 Please note the following points which may help to better understand the picture shown above:

What bugs are currently opened against JDT/Core?

Bugs opened and not resolved yet.

What target milestone should be used?

Notes
- If a bug is backported to a maintenance stream, then see What should I do to backport a fix? question for more details
- As soon as you modify the target of a bug, then you have to go through all its duplicates if any and set these duplicates with the same milestone as the one used for the original bug.

What comment should be used when fixing a bug?

When changing a bug to RESOLVED/FIXED a comment containing the following string should be use: "released for <target milestone | maintenance release>". E.g.

This string is used when querying the bugs to verify for a particular milestone.

The resolution LATER is deprecated. What should I use instead?

Bugs that we don't plan to fix used to be resolved as LATER. Since this resolution is deprecated, we shall now use the P5 priority.

The resolution REMIND is deprecated. What should I use instead?

Bugs that needed more information used to be resolved as REMIND. Since this resolution is deprecated, we shall now use the needinfo keyword.

What status/resolution should I use after marking a bug duplicate?

When can I set a bug to VERIFIED?

The bugs Resolution status is only set to VERIFIED during the verification process the week of the milestone delivery (see How do I verify my bugs?)

What steps should I follow to make a build contribution?

What is the milestone verification process?

The verification of a milestone is made of two main phases:

What is the bugs verification phase?

What are the bugs I have to verify?

All bugs fixed in the milestone's stream must be verified the week of the milestone delivery.
(this is why setting the correct target for bugs is really important - see What target milestone should be used?)

To avoid a bug verifying by several committers at the same time, the whole bugs list is split into several ones. An email is sent to each verifier with the corresponding list of bugs to verify.

For example, the following bugzilla requests were used to follow the verification progress for milestone 3.4 M2:

all bugs to verify: all bugs request
bugs that Frederic must verify: verifier's bugs request

When do I have to verify my bugs?

Usually this verification starts as soon as you get your bugzilla request and a warm-up build is available on Eclipse Project Downloads page.

Note: The corresponding milestone stream is frozen until this verification is finished (see When can I consider the verification finished?)

How do I verify my bugs?

What if I my fix is not in the build used for the verification?

When can I consider the verification finished?

When all your bugs are verified, wait for the email sent to all team members and to the jdt-core-dev@eclipse.org list. This mail describes the status of the verification and indicates which JDT/Core version is eligible for the milestone. You are also informed whether the corresponding stream is reopened for development or not.

Here's a sample of the email sent at then end of the 3.4M2 verification

Version v_813 of org.eclipse.jdt.core project should be the JDT/Core contribution for 3.4 M2 milestone...
So you can consider JDT/Core projects HEAD reopened for development :-)

What should I do if I need to contribute after the verification was finished?

The process depends whether the stream was modified since the last version or not:

What is the build test usage?

When the bugs verification is done and OK, all committers have to use the latest candidate build until the milestone is officially declared. They should test it either as normal development usage or, if some more intensive testing is needed, as described in a specific test plan (e.g. http://www.eclipse.org/jdt/core/r3.3/test-3.3.1.php)

How do I deliver a patch for a maintenance stream?

Note that you should contact the JDT/Core lead first if you need to deliver a patch for a maintenance stream. In case he/she is not available, here are the steps to follow:

How do I get the JDT/Core tools?

The JDT/Core tool can be obtained from this update site: http://www.eclipse.org/jdt/core/tools/jdtcoretools/update-site/ using Eclipse update manager.

An integration or maintenance build is red. Should I take it?

A red build doesn't mean that it is not usable. It just means that some tests failed. The impact of failing tests is often negligeable. E.g. if the releng tests are failing, it just means that there is a problem in the Javadoc. So you should always take the latest integration or maintenance build, unless someone posted on the platform-releng-dev mailing list that it is not usable.

What about contributions by non-committers?

(1) "Small" contributions (patches) coming from non-committers. For this, we ask you to use the attachment flag "iplog+". Please remember to add this flag whenever you commit a patch from a non-committer.

(2) "Large" contributions (code > 250 lines, new feature work) coming from non-committers. For this, remember that it has to go through the proper IP review process with the Eclipse Foundation through IPZilla.

(3) Any new, updated (i.e. new versions being used), modified (i.e. we modify the code) or removed dependencies on third-party code, usually on bundles that reside in Orbit. This also has to go through the Eclipse Foundation IP review process.

"Non-committer", in this context, is defined as: anyone who is not a committer on the Eclipse project (Platform, JDT, PDE) at the time they make the contribution.