The Esri shapefile is a popular format for geographic information systems (GIS). Shapefiles can describe polygons, polylines and points. Polygons can, for example, represent geographical regions like countries and states while polylines can represent roads, rivers and so on. Points are currently not used used in the Shapefile Graph Generator.

A shapefile is a set of various files, three of these files are used by the Shapefile Graph Generator .

The shapefiles used in this example can be downloaded from [1]. The UI for importing shapefiles can be displayed by choosing the item Shapefile Graph Generator in the New Graph wizard. When clicking on Select Shape Files multiple shapefiles can be selected in a file dialog. For each of the shapefiles it must be specified if the file contains regions, roads or polylines with migration data. Additionally an unique ID for each shape has to be specified by selecting an ID column in the related combo box. The data of all columns can be displayed by clicking on Show Data. If the shapefile contains roads or polylines with migration data additional parameters like Road Class, Migration Rate and so on must be specified. To do so the data from a table column can be used or the value for the parameter can be entered in the text field. In the latter case the same value is used for all shapes. 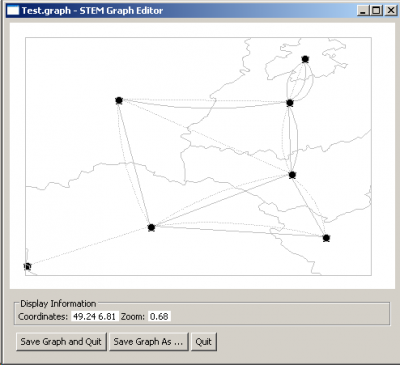