Building ICE from scratch requires access to some "secret sauce" since it is still in incubation. It has both a dependency bundle and a set of data files used for the tests, which are run during the build, that are not publicly distributed. Unfortunately we cannot widely distribute these, but if you genuinely need to build ICE from source contact eclipse.ice.project <at> gmail.com for more information.

Building ICE will works out of the box with Eclipse Luna and greater, which comes with the EGit and M2E (Maven) plugins installed by default. You may have to install these plugins manually if you are using an older version of Eclipse. Alternatively, you can use ICE to develop ICE since it has all of the necessary plugins installed. (That is super meta, we know!)

Be sure to check the box that says "Import all existing projects after clone is finished." This will automatically import all Eclipse ICE projects into your workspace and save you quite a bit of time and prevent you from having to learn how the repository is laid out. 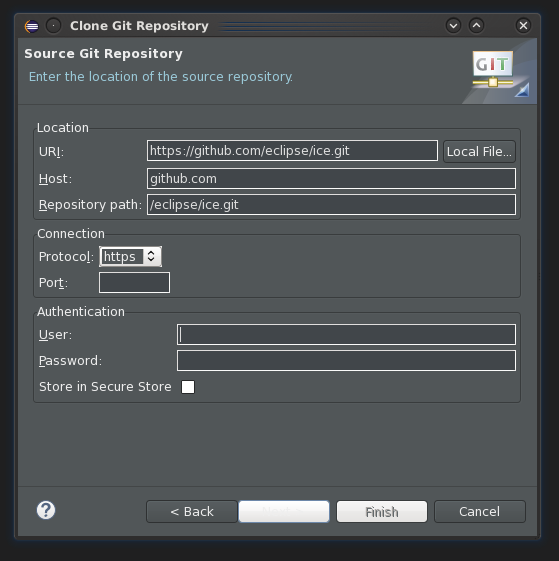 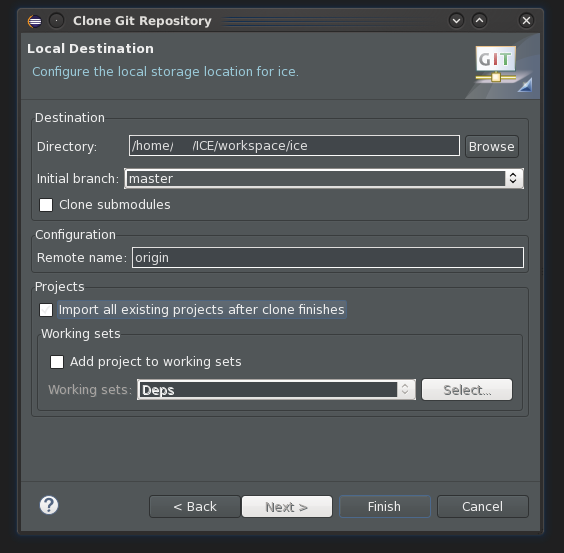 If you are using a vanilla version of Eclipse for development, all of the projects will show up in your project explorer and most of them will have red error boxes next to them. You will need to load the target platform by opening the org.eclipse.ice.target.mars project, opening the "mars.target" file, and clicking the "Set as target platform" button in the top right of the editor once the platform has resolved. Resolving the platform takes a very long time if you have never done it before, so watch the status bar in the bottom right to monitor its progress.

ICE is a big code, so properly building can take some time. It is broken into two steps, each roughly ten minutes in length. The first step is to build all of ICE's bundles and run its unit tests. The second test is to package the ICE binaries for distribution. This step requires approximately 6.3GB of storage space to build. The very first time you build ICE may take much longer because the build must download all of its dependencies, depending on your internet connection speed.

In order to build ICE binaries from Eclipse, you must use the Eclipse plugin for Maven. Once the plugins are checked out from the repository, make sure you can see packages in the package explorer. If not, you may not have checked the "Import all existing projects after clone is finished" box when cloning ICE. You can import the projects from the Git perspective by right-clicking on the ICE repository and selecting "Import Projects".

To build and test we need to create a custom run configuration. Look for pom.xml in your top level directory.

Right-click this file, and scroll to 'Run As...' and select 'Run Configurations' at the bottom. In the menu that appears, select the 'Maven Build' option in the left-side menu and click the new button (a small button that looks like a blank piece of paper with a gold plus sign on it) at the top. A new configuration will be created. You need to set the name at the top of the page, choose the org.eclipse.ice.build/ directory by clicking the "Browse Workspace" button and set the goal to -N install to properly launch the build. Click 'Apply' and then 'Run.' 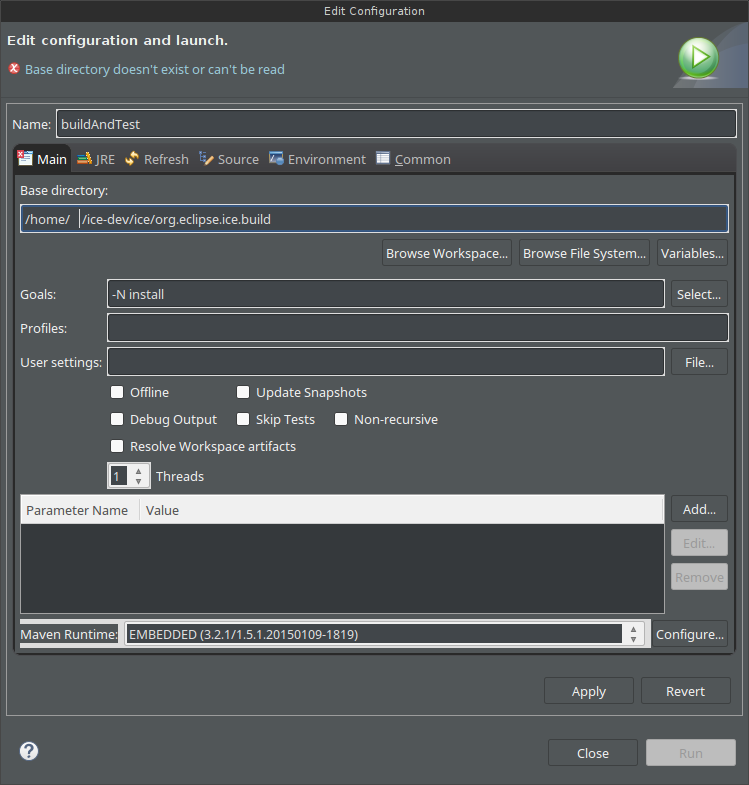 This downloads and installs any required dependencies, and will probably take a while if this is your first time building ICE binaries. Once all dependencies are downloaded, the last step is to actually build ICE. To do this, right-click on the same pom.xml file, and select 'Run As > Maven install.' This will build and test all of ICE's bundles. If this is your first time, this process could take upwards of 10-12 minutes depending on your system. If the build system encounters any errors or failed tests, they will be reported in the Eclipse console window, and the build will be terminated early. Alternatively, if the build is successful, a "BUILD SUCCESS" message will be displayed in the console once the build completes, and the ICE binaries will have been created in your Eclipse workspace. If you experience any issues with the build send your error logs to ice-dev <at> eclipse.org.

On the Command Line

We need to follow the same steps as listed above, but on the command line we must execute commands like mvn -N install.

Once Maven is installed, open a terminal window and change your current directory to your ICE workspace. Next, execute the following two statements in order:

The first command downloads and installs the required dependencies, which may take several minutes to complete, and it installs the ICE "parent" build configuration in your local Maven repository. The second command builds the ICE source and test bundles, executes the tests, and creates binaries if the tests pass. This may take a very long time if it is the first time you are building ICE, because Maven will download a lot of other plugins that it needs to build Eclipse RCP applications and to bootstrap itself. However, subsequent builds take about seven to twelve minutes on high-end and low-end systems respectively.

Change your current directory to ice/repository/org.eclipse.ice.repository/ within your ICE working copy. Next, execute the following command:

The target/products directory contains a p2 repository; compressed (ZIP) files of ICE for 32- and 64-bit Linux, Mac, and Windows; and unzipped directories with the executables for each platform than can be immediately executed.