Difference between revisions of "EntityId Requirements"

#1: Not Require EntityId to be Exposed as an Attribute

The proposed change is to make it OPTIONAL to expose EntityId as some kind of Attribute. Contexts that do not want to expose the EntityId can omit it from the list of Attributes for an Entity. Note: if the EntityId is mutable, it SHOULD be exposed as an Attribute so it can be modified.

For those Context Provider developers who wish to explicitly tag certain Attributes as being capable of being used as an alternative identifier for this Entity (i.e. it uniquely at LEAST within the containing Context identifies this Entity).

For example, if the developer wished to declare a "mobile" telephone number attribute as being a synonym to whatever kind of identifier getEntityId() returns, they would, in their Attribute Definition define their new mobile attribute as a sub-property of higgins:synonym. For example:

[well, in practice the range would likely be a syntax restriction on xsd:string, not a plain old xsd:string, but fixing that would complicate the example]

This method returns an array of EntityIds that uniquely identify the Entity within the Context. Each Object is either

This method returns the "canonical" EntityId, i.e. the preferred one. The returned object is either a String or an IAttribute. The context provider guarantees that this EntityId is immutable. Returns null if this Entity has no Cannonical EntityId

This method already exists today. There is no change to it. It looks up an IEntity based on a String which is not an Attribute of the Entity.

This method already exists today. There is no change to it. It looks up IEntitys based on an IFilter, which can select them by Attribute Values. 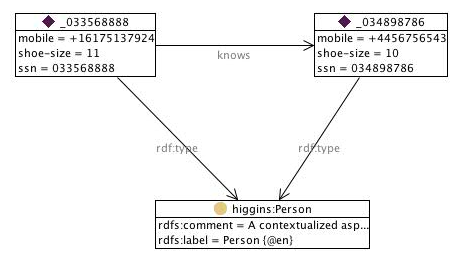 This page was last modified 15:13, 14 May 2009 by Paul Trevithick. Based on work by Markus Sabadello, Paul Trevithick and Jim Sermersheim and others.