This page is for individuals who want to make a contribution to an Eclipse project via Git or Gerrit.

If you want to contribute to an Eclipse project, you should first communicate with that project. Communication takes many forms, but generally occurs on a project's "dev" list, or via Bugzilla.

You can find the appropriate entry points on the project's page on the forge:

Before your contribution can be accepted by the project, you need to electronically sign the Eclipse Contributor Agreement (ECA).

Be sure to use the same email address when you register for the account that you intend to use on Git commit records.

If a project supports Gerrit, you can push directly to that project's repository. Alternatively, if you have a public Git repository, a project committer can pull your contribution.

Minimally, your Git commit record must have the following:

You can specify additional authors using one or more "Also-by" entries in the message footer.

The "Signed-off-by" entry is required. By including this, you confirm that you are in compliance with the Certificate of Origin.

Note that the footer entries must occur at the bottom of the commit message and must not include any blank lines.

Signing off on a commit

Both Git and EGit have built-in support for signing off on a commit.

From command-line Git, add -s to the command:

From EGit, there is a handy button in the commit dialog box: 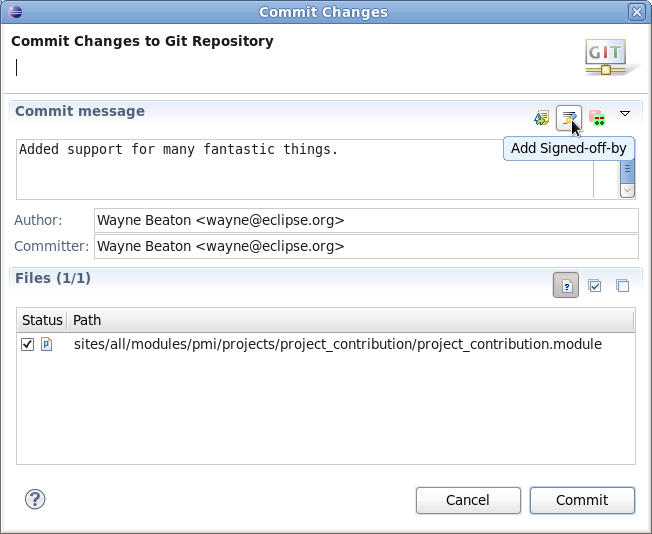 EGit can also be configured to sign-off all commits you create from EGit automatically:

Many projects have enabled Gerrit to review contributions. When Gerrit is available, it uses a specific repository URL, which should be listed on the contribution page of the project. The general pattern for Gerrit at Eclipse.org URL is ssh://username@git.eclipse.org:29418/path/to/repo.git, so you can add a reference to Gerrit for your repo using git remote add gerrit ssh://username@git.eclipse.org:29418/path/to/repo.git

A rule with Gerrit is that you should push a single commit. If you wish to push another version of for an existing Gerrit review, make sure it has the same Change-Id in commit message footer so Gerrit will understand it as another version and not as a new contribution. The best way to make sure it uses the same Change-Id is to prefer using git commit --amend to modify the existing commit and then re-push it.

Then you can simply push new patches to Gerrit using git push gerrit HEAD:refs/for/master. It will check ECAs and other stuff, and if you commit gets accepted by this automatic checks, it will return you the URL for your change. Code review and developer interactions will happen on that change. You should receive notifications on each change, but in case you don't, please monitor the change at the given URL to react promptly to questions.

If the project repository is hosted on GitHub, you can issue a standard GitHub pull request. Ensure that you have a ECA and that the commit record is properly "Signed-off-by" before you issue the request.

If you cannot push to a project's Gerrit repository, or do not have a public Git repository from which a project committer can pull, you can submit your contribution as a patch attachment on a Bugzilla record.

You must have a signed ECA on file.

Further, you need to sign-off on the Certificate of Origin in a comment on the bug. For example:

A Word about Eclipse Foundation Accounts

The Eclipse Foundation maintains multiple separate forges. The same user account applies for all forges. If you, for example, create an account on eclipse.org, that same account can be used on LocationTech or PolarSys. A signed ECA is connected to your Eclipse Foundation account; this means that with the single valid ECA on file, you can contribute to any project on any of the forges.

This page is moderated by the EMO.