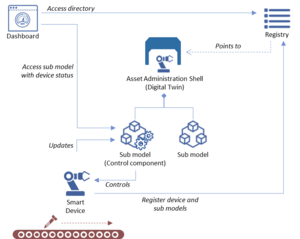 The BaSyx middleware groups Industrie 4.0 components around a communication medium, which is for example an Ethernet network. BaSyx users may use any specific network and protocol (e.g. HTTP, OPC UA, BaSyx native) to attach components, but need to make sure that components are able to exchange data with each other. The Virtual Automation Bus is a set of optional components that implement the functionality to bridge networks if necessary. A BaSyx deployment consists of several BaSyx services, as well as other components, e.g. control components that use BaSyx conforming interfaces. All components are connected to the communication medium. The graphic below illustrates an example architecture overview on the BaSyx middleware and its various components: