Difference between revisions of "BPMN2-Modeler/DeveloperTutorials/HowToStartContributing"

If you want to contribute to this project, you can find a short tutorial below how to start:

Frist of all take a look into the Issue Tracker of the BPMN2 Modeler project. There you can find current issues we are working on and we are pleased if you will help us here.

You can also report a new issue here.

where [USER ID] is your committer user id.

When you clone the repository, you will find a lot of branches. In most cases it is sufficient to checkout only the master branch or the branch pointing to one of the Eclipse major releases you are working on (e.g. photon, neon,...) 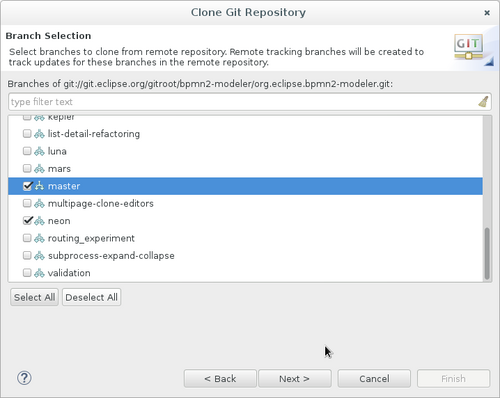 Note: The master branch contains the release for the next Eclipse version. For the current Eclipse IDE checkout the corresponding branch (e.g. neon).

You may also need to check/update your .git/config file with the following:

And that should be it.

Import the BPMN2 Modeler project into your Workspace

Now you can import the BPMN2 Modeler project into your workspace 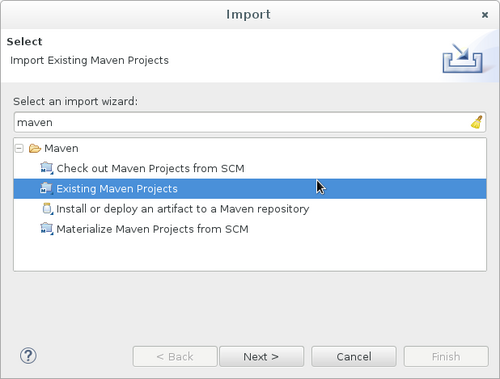 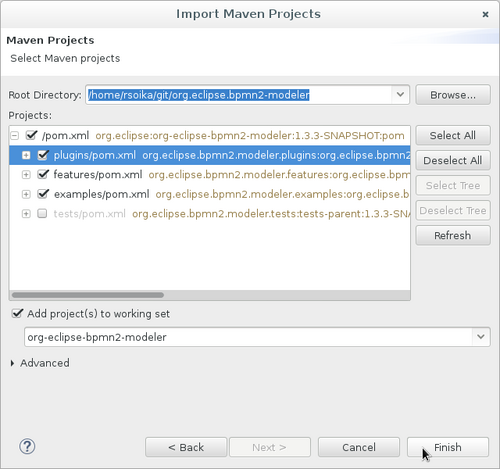 In most cases the following plug-in modules of the BPMN2-Modeler are sufficient:

Next you can open the plugin.xml file from the subproject 'org.eclipse.bpmn2.modeler.core' project and start the plugin directly from your IDE. You can also launch the plugin in the debug mode form here: 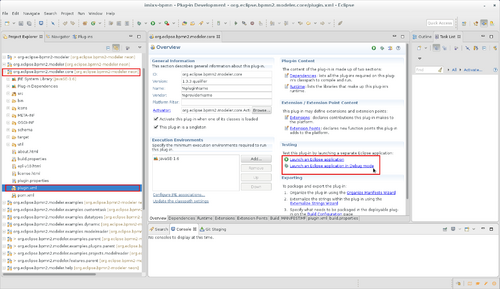 Commit your Changes via Gerrit

As far as committing changes to the Gerrit git repo, you should be able to just push to gerrit, and this will create a change record for review. You need to create a eclipse account if you have not done yet. Please have a look at the Eclipse Project Handbook and the Gerrit Wiki Page if you run into problems.

To commit your changes the commit message have to be in the right format. First of all make sure hat you have the bugzilla issue id. If you not yet have an existing issue ID in Bugzilla, start creating a new issue first.

The commit message has the following format

The 'Signed-off-by' message can be generated automatically by Eclipse when you press the 'Add-singed-off-by' icon:

If you start the first line of the commit message with Bug 12345 or [12345], than the bug will be linked automatically with the commit in Gerrit (see also here).

The Change-ID can be ignored. This ID is generated automatically during the commit!

You will find more information about the Gerrit Commit Message here.

After you have pushed your changes, you can track the review process via the Gerrit Link listed in your git message or bugzilla issue.

Verify and Submit your Changes in Gerrit

After you pushed your changes into Gerrit it's time to review, verify and submit your changes. This can be done by an committer of the BPMN2-Modeler Project only.

Next verify the commit:

After this you can pull your changes again from the git repo. The Bug report in Bugzilla will be updated and a (Nightly Build [1]) will be started automatically.

To start the build process of Eclipse BPMN2 Modeler plugin run the maven install goal on the project root:

you need to specify a eclipse release as defined in the profiles of the pom.xml. See the following example to build the project for the current Eclipse platform release:

Note: the profiles are defined in the file /parent/pom.xml

Nightly builds represent the last successful build from the master branch. You can install these version from the following update site:

Changes merged into the master branch will be automatically build from the Eclipse CI platform as a 'nightly build'. You can check the build process here.