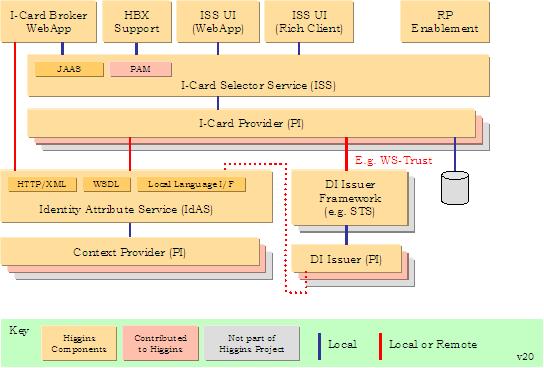 RP Enablement. Our intent is to work with identity system vendors to define a standardized interoperable definition of the HTML tags read by HBX and/or other policy expressions (e.g. WS-SecurityPolicy) to express the relying site's constraints and conditions. For testing purposes, especially by relying site developers, we will be developing the RP Enablement component. It implements functions related to Digital Identity verification as well as tools to generate RP Policies and provide access to them via web pages, WS-MEX, etc.

I-Card Manager/Broker WebApp. Provides a management interface to the user's i-cards and underlying context data (if any). This app is accessed by pressing a button embedded in the browser's toolbar.

HBX Support. Adapts the generic ISS service to the specifics of the various web integration approaches and protocols supported by the Higgins Browser Extension.

ISS UI (WebApp variant). In deployments where the Higgins Browser Extension uses a remote ISS service, this webapp provides the I-Card Selector UI web pages that are displayed by the Higgins Browser Extension allowing the user to select a matching i-card from among those that match the relying party's policy, approve the release of its associated Digital Identity, and allow the user to create their own self-asserted i-cards.

ISS UI (Rich Client variant). In deployments where the Higgins Browser Extension uses a local ISS service, this rich client provides the I-Card Selector UI and the same features mentioned under #5 above.

Identity Selector Service (ISS). ISS negotiates between relying party and identity provider(s) in order for the user to gain access to the services at the relying party. It does this by finding matches between the claims required by policy of the relying party and the claims in available i-cards. As controlled by the policy on these i-cards it uses the ISS UI & HBX Support component to provide a consistent user interface for the selection and release of claims under the supervision of the user. It keeps track of which relying sites and/or services to which the user has released Digital Identities.

DI Issuer. The DI Issuer Framework relies on DI Issuers for packaging and signing of specific kinds of security tokens.

Identity Attribute Service (IdAS) (IdAS). To support a dynamic environment where sources of identity information may change, it is necessary to provide a common means to access identity and attribute information from across multiple identity repositories. The IdAS virtualizes identity sources and provides a unified view of identity information. IdAS includes services such as: open initial Context, open other Contexts from the initial or other contexts, negotiate/broker authentication during opening of contexts, navigate the contents of an opened context and inspect contained Digital Subjects and their attributes, edit attributes (as allowed by the context's policies), associate of Digital Subjects within and across contexts, creation of new contexts, support management of the attributes of Digital Subjects linked within and across Contexts. The IdAS API will be accessible via Java and other languages as well as via WSDL and HTTP/XML.

Context Provider A Context Provider adds support for one or more kinds of Contexts to the Higgins framework. These Contexts contain Digital Subjects that hold Identity Attributes. A context provider is responsible for its internal data management, security, encryption, persistence, etc. The provider provides the uni- or bi-directional transformation of data from its internal structures to the normalized IdAS data model. In many cases these Context Providers act as adapters or "wrappers" of existing services such as communications systems, collaboration systems, social networks, identity providers, games, enterprise apps, and so on. In addition to web services, Context Providers can also adapt client-side applications such as email clients, IM and other messaging and collaboration apps.. We plan to develop approximately 3-5 Context Providers. We expect that third parties may also choose to contribute Context Provider implementations to the project.

Recent changes to the diagram above: