This page shows what you need to know about the new Eclipse Scout 3.9 release shipped with Eclipse Kepler.

For Kepler, Scout has moved to GIT: http://git.eclipse.org/c/scout/.

CVS features removed from EPP. If CVS is needed, it has to be installed manually.

Two features for testing have been added to the updatesite:

Besides a IPropertyFilter the FormData import (method importFormData() in AbstractForm) now also allows to specify a IFormFieldFilter. With this overload it is now not only possible to influence which properties that are imported, but also which form fields that should be filled. A default implementation is available that allows to exclude some fields from the import (org.eclipse.scout.rt.client.ui.form.fields.ExcludeFormFieldFilter).

bug 395673 A marker icon is now displayed in an editable cell in an SWT table (similar to the swing table).

The icon can be changed by setting the extension org.eclipse.scout.rt.ui.swt.scouticons for the cell_editable icon.

With bug 402301 and bug 402304 a JUnit testing suite was started in the Eclipse Git Repositories. The tests are executed as part of the Maven+Tycho build.

JUnit tests classes requiring an UI layer (because they use AWT or SWT classes), are identified with a special suffix UiTest instead of Test. This allows to ignore these tests (maven profile skip-uitest, active by default) to be able to build on backend-servers that do not provide an UI layer. In order to execute the UiTest you might consider the maven profile include-uitest. 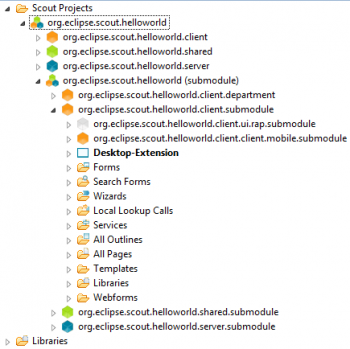 The Scout Explorer View shows all Scout Bundles and provides folders below them to manage the typical objects for a bundle type.

The detection and layout of this bundle entries (the green, orange and blue nodes) have been redesigned for Scout 3.9:

Scout 3.9 comes with an enhanced web user interface (RAP) that is optimized for smartphone (mobile) and tablet devices.

By creating a new Scout Project using the Scout SDK you automatically get the mobile support when choosing to create a RAP user interface bundle. In the default setup you get four servlets prepared:

Furthermore you get a client.mobile bundle prepared that includes all modifications to your client that should apply to mobile and tablet devices only (e.g. if you want to hide or replace some features). 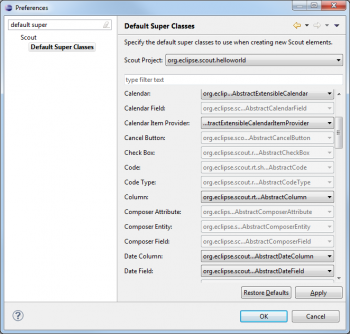 In Scout 3.8 when creating a new object using a wizard you already have the possibility to choose from a list of possible super classes. But the super class selected by default is always the same. So if you e.g. have defined a project specific template for forms called 'AbstractMyProjectForm' you always have to remember to change the selected super class when creating forms.

With Scout 3.9 you now have the possibility to configure the super classes that should be used by default for each Scout project independently: Go to Window -> Preferences -> Scout -> Default Super Classes. There you can specify the default super class to use for each object type and Scout project.

This configuration is also considered if you don't explicitly have the possibility to choose a super class in the wizards: E.g. when creating a new Form by default there are also 'Cancel' and 'OK' buttons created. If you now modify the default super class for OK buttons, this is automatically used by the new Form wizard as well.

This mechanism also respects the new extensible Scout objects defined in 'org.eclipse.scout.rt.extension.client': If your project has this dependency, the Scout SDK prefers those objects over the standard ones (unless you have modified the defaults).

The settings are stored in the project preferences so that you can share them with your team using e.g. a team provider like SVN, CVS or Git. 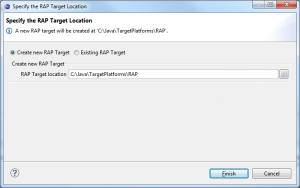 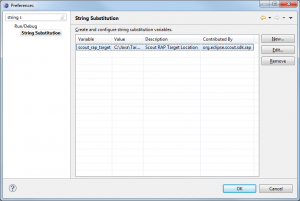 In Scout 3.9 you now have a new Eclipse environment variable called 'scout_rap_target'. So instead of using the local path directly in the target definition you can use the ${scout_rap_target} variable as a palceholder and each developer can then point this variable to the path where to find the plugins locally. The value of the 'scout_rap_target' variable is stored in the workspace and can therefore be different for each instance.

The Scout SDK also detects if you are using (or importing) a target definition containing this variable. And if you have not yet defined a location for the variable will ask you to define one or create a new RAP target location. 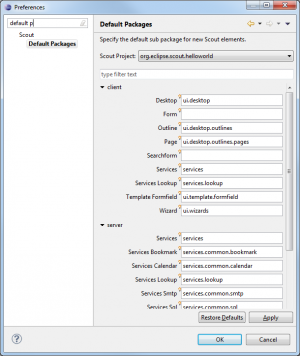 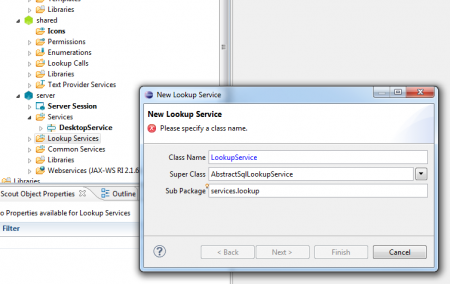 In Scout 3.9 the SDK does no longer rely on a specific package structure.

This affects the Scout Explorer which now searches for objects in a whole plugin instead of specific packages. As a consequence the folder 'Process Services' and 'Outline Services' have been merged to a general 'Services' node containing all services except lookup and the common ones. This gives you more flexibility in usage and design of your services.

Furthermore you have the possibility to specify the target package when creating new Scout objects using the Scout SDK Wizards. The packages where new objects are created by default can be configured using the preference page: Window -> Preferences -> Scout -> Default Packages.

These settings are stored in the Scout project preferences and can therefore be shared using a team provider like SVN, CVS or Git.

For your existing projects, if you don't want to re-organize to the new package structure and don't want to get a mix of concepts there exists an option in Window -> Preferences -> Scout -> Use Legacy Target Package. If this option is enabled, the Scout elements created with the Scout SDK are placed in the same packages as with older Scout SDK Releases.

Improvements for the NLS Field

We have changed the sorting and presentation of the NLS proposal field so that the list behaves more intuitive and that it is more clear why a match is included in the list. This includes separation of the matches depending on type and sorting according to relevance.

The Scout SDK now also contains a checkbox to easily add/remove Docx4j (http://docx4java.org/) support to/from an Eclipse Scout application. The corresponding runtime and SDK bundles are available on the Eclipse Marketplace and will be automatically downloaded and installed when the checkbox is activated. Read more about Docx4j for Eclipse Scout on the wiki.

The SDK bundles contain an importer and exporter for the NLS texts which can handle .xlsx files (Microsoft Excel 2007 or newer).

On the Scout Update Site (http://download.eclipse.org/scout/releases/3.9) a new Feature called "Eclipse Scout SDK Testing" is published. If you have developed your own Scout SDK enhancements, this feature helps you testing your SDK plugins. It contains various helpers for test-workspace setup and cleanup, to do various assertions or controlling common JDT tasks.

This page was last modified 02:41, 21 August 2014 by Judith Gull. Based on work by Jérémie Bresson, and Matthias Villiger and others.