One of the major use cases for the Papyrus-RT project, indeed the first use case that is encountered by a large segment of its user base, is import of UML-RT models from other systems. The primary such system currently supported is RSA-RTE. That tool encourages scaling models for source control by distributing the storage of model content over sub-model resources called 'fragments'. These fragments are not independently editable, but are editable only in the context of the model resources that (recursively) store the trees of objects containing their contents.

Up to the Papyrus Neon release, models from RSA (and therefore RSA-RTE) that were fragmented in this way are imported in a manner that retains this sub-model resource structure, but with a twist: in Papyrus, sub-model units are always independently openable and do not open in the context of their containing namespaces. For this reason, the "control" action that creates a new sub-model unit would create redundant profile applications on the package that is the root object in the sub-unit for all of the profiles applied to any nesting packages (this could not be done for sub-units that are not packages, as the user is warned by a dialog in the UI). However, because in RSA its 'fragments' are not independently openable in this way, they do not repeat profile applications and accordingly the sub-model units created in the imported Papyrus model do not repeat them, either.

To provide a more complete RSA-RTE import experience in the Papyrus-RT 0.8 release that is based on Papyrus Neon.1, improvements are planned in the design of the 'Control Mode' (model sub-unit resources) capability of Papyrus:

The first of these enhances the existing control-mode framework with support for sub-units that behave more like RSA's fragments, being not independently editable. Initially this capability is used only by the RSA model importer to import fragment resources. The second enhancement provides additional UI to support this new style of controlled unit in Papyrus- and Papyrus-RT-centric use cases.

This enhancement introduces a new variant of the controlled unit dubbed a 'shard' (as being a fragment of broken ceramic or glass that is a constituent of the whole on not generally handled). Thus Papyrus supports two modes of controlled unit:

The topology of sub-model units is implied by cross-resource containment in EMF: that is, containment references that have proxies for lazily resolved objects from other resources. As one of the benefits of the classic Papyrus sub-model unit is that it is independently openable and editable, it does not add a reference to its parent unit in an annotation as is done in RSA's fragments, because that would trigger loading of the parent unit chain by proxy resolution. Accordingly, in order to discover the connected graph of sub-unit resources at run-time, some agent is required that can provide independent off-line knowledge of it. This is naturally implemented on the WorkspaceModelIndex framework.

A new ICrossReferenceIndex API in the org.eclipse.papyrus.infra.emf bundle provides for queries (asynchronous and synchronous, as usual) about:

Unlike sub-model units, shards additionally have annotations that reference the containing object in the parent resource, not unlike fragments in RSA. This is not a problem because they are not intended to be loaded independently of their parent units, anyways, but also has the benefit of enabling a tracing of the parent unit chain in cases where the full off-line index is not available:

In these contexts, the cross-reference index API actually parses resources on-the-fly looking for these annotations to trace the parent unit chain, without loading them in the EMF manner.

The point of shard resources is that they cannot be loaded without the chain of parent resources storing their containing objects, so that in the case of UML resources, packages find all of the profile applications in their nesting packages to ensure that stereotype applications are properly resolved.

This loading of the parent unit chain, from the root unit(s) down, is ensured in two different ways, depending on the circumstances:

Because now another index is introduced (Papyrus has had an index of external profile applications since the Mars release), it is prudent to do some refactoring to ensure as much as possible that performance doesn't suffer from the added burden.

Rather than have every index create background jobs for itself that react to resource changes and scan projects in the workspace, now a new IndexManager provides a single point of control for these processes:

This improves throughput of the indexing process by eliminating multiple passes over resource deltas and resource trees in the workspace projects, but it does mean that asynchronous queries on any index will only be ready when all indices complete their processing of any deltas.

Because even the simplest use case of opening a model now depends on this new workspace-wide index, it is important to initialize that index as efficiently as possible. To that end, the WorkspaceModelIndex framework now supports an extension of the IndexHandler protocol which is a PersistentIndexHandler. This protocol

The new CrossReferenceIndex supports persistence and the older DecoratorModelIndex is retrofitted for persistence, also.

As a consequence of both of the enhancements described above, consolidation of control and initialization from a persistent store, it is necessary for the IndexManager to discover all available index instances when it starts up. This is accomplished by a new extension point org.eclipse.papyrus.infra.emf.index on which IWorkspaceModelIndexProviders are registered that supply unique concrete WorkspaceModelIndex instances. It is not required but probably advisable that all such instances be long-lived singletons.

As far as the manipulation of sub-units is concerned, they are still created in the same way as in the Neon release. The difference is that, after a model element is stored in its sub-unit resource, it needs to be tagged as a 'shard'. This is accomplished by the ShardResourceHelper API. A helper is initialized with the model element that is the root of the shard sub-tree. It can add or remove the shard annotation directly or by providing Commands for execution on the stack and can query the current shard-ness of the sub-unit. As long as the helper is in use, it maintains Adapters to track any changes to the object's containment and/or shard annotation. For this reason, it must be closed when no longer needed, to prevent memory leaks.

This enhancement introduces UI for manipulation of the 'shard' style of sub-unit resource, including: 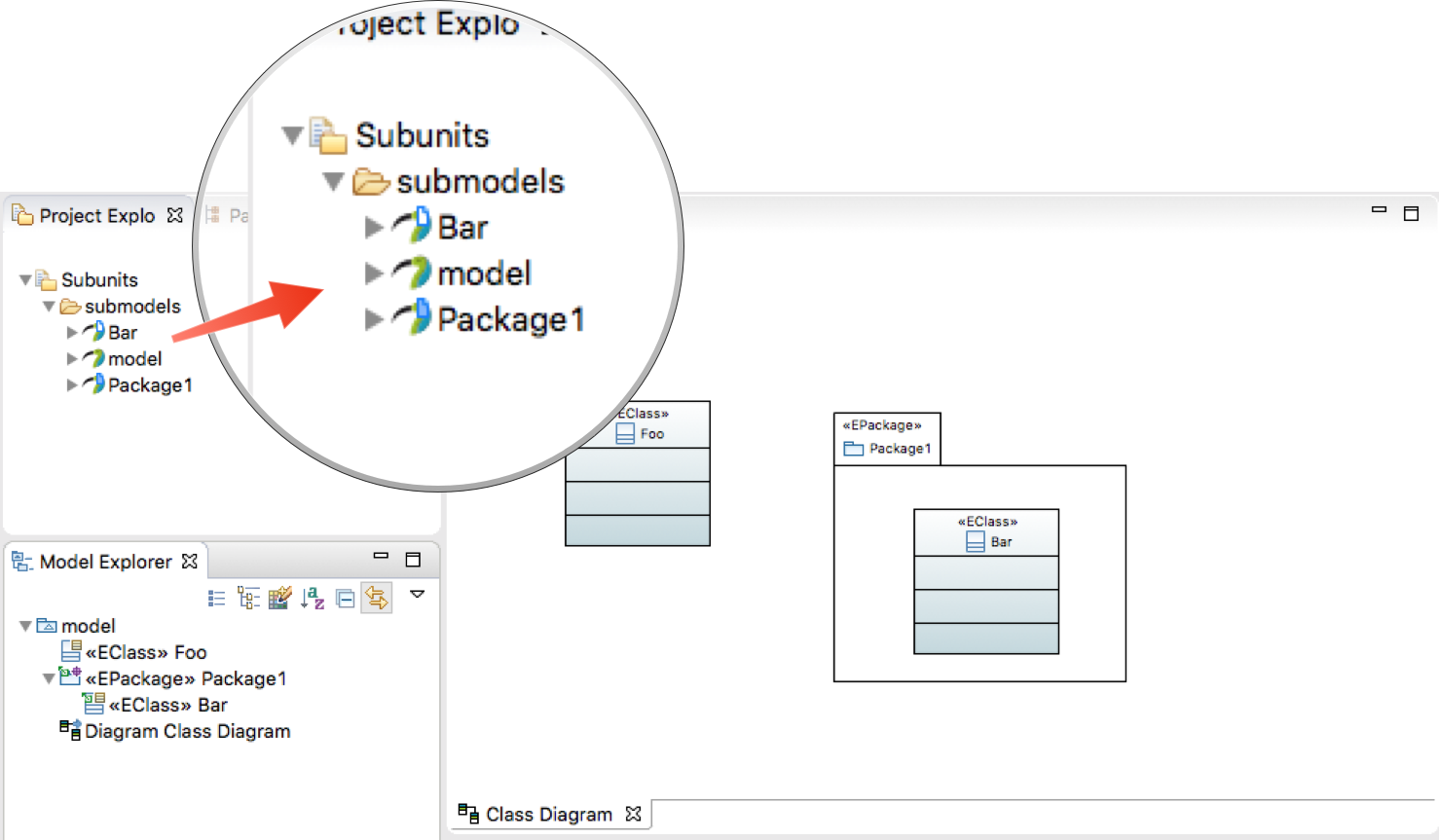 UC5 Convert a Sub-model Unit to a Shard

UC6 Convert a Shard to a Sub-model Unit

UC6.1 Variant: Convert a Class Shard to a Sub-model Unit

A new protocol specializing the IControlModeParticipant is introduced that participants may optionally implement to influence the UI workflows. The IControlCommandApprover interface specifies two operations:

So, the former of these APIs is used by the ControlModeManager to determine the enablement of the check-box option for sub-models in the 'control resource' dialog and in the context menu (although, of course, in the latter case the action is enabled if a non-package element is controlled as a sub-model in order that it may be converted to a shard).

The latter API is used by the UI control/uncontrol command handlers to validate a request before attempting to survey the participants for commands and execute them.

The 'shard' structure is compatible with the Neon and Mars releases. It adds only an annotation that those versions of the software simply ignore. The back-reference to the parent unit will usually cause the parent units (and recursively up to the roots) to be loaded, which may help to emulate the Neon.1 and later behaviour. However, because a Neon.1 shard will not have redundant profile applications (a model imported from RSA in Mars or Neon would not have them, either) then there may be problems in handling of stereotype applications and potential data loss. If these resources must be edited with Mars or Neon versions of Papyrus, then it is recommended either always to open them at the root unit explicitly or even to opt for the classic sub-model unit structure (except for non-packages, which effectively always were defective shards anyways).