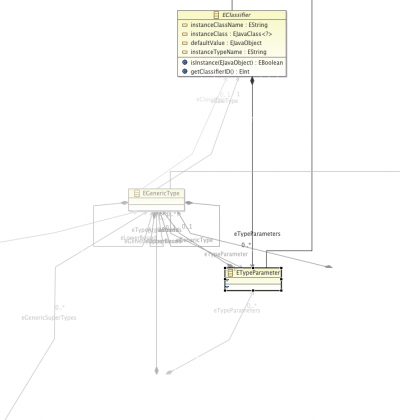 Mylyn Context Model Focusing Tools (MFT) project brings the productivity, integration and traceability benefits of Mylyn to Eclipse Modeling. It provides a focused mode for diagrams that shows only the elements related to the task-at-hand, dramatically reducing information overload for engineers working on large models. In addition, the task-focused interface extensions provide Mylyn’s one-click multitasking facilities for working with models, ensuring that developers can instantly recover from interruptions, and share model-specific expertise, when working with models in addition to what Mylyn already provides for engineers working with source code.

You can also install MFT 0.9.0 from Juno, but the latest release is currently only available on the above site(s). SR1 will include 0.9.1.

We recommend starting with Ecore Tools, as the tools have less dependencies and more complete integration. Mylyn for Modeling has minimal dependencies defined on its target tools, so you should probably install the target tools separately if you don't already have them.

Mylyn for Modeling works in the same way as other Mylyn tool integrations such as for Java. See the Mylyn User Guide for more details. Modeling specific features are described here.

To reveal unfocussed items, we provide a "fade effect" to reveal diagram items. As you move the mouse though the diagram, nearby unfocussed nodes and edges will be revealed. Just click on a node to add it to your current context. 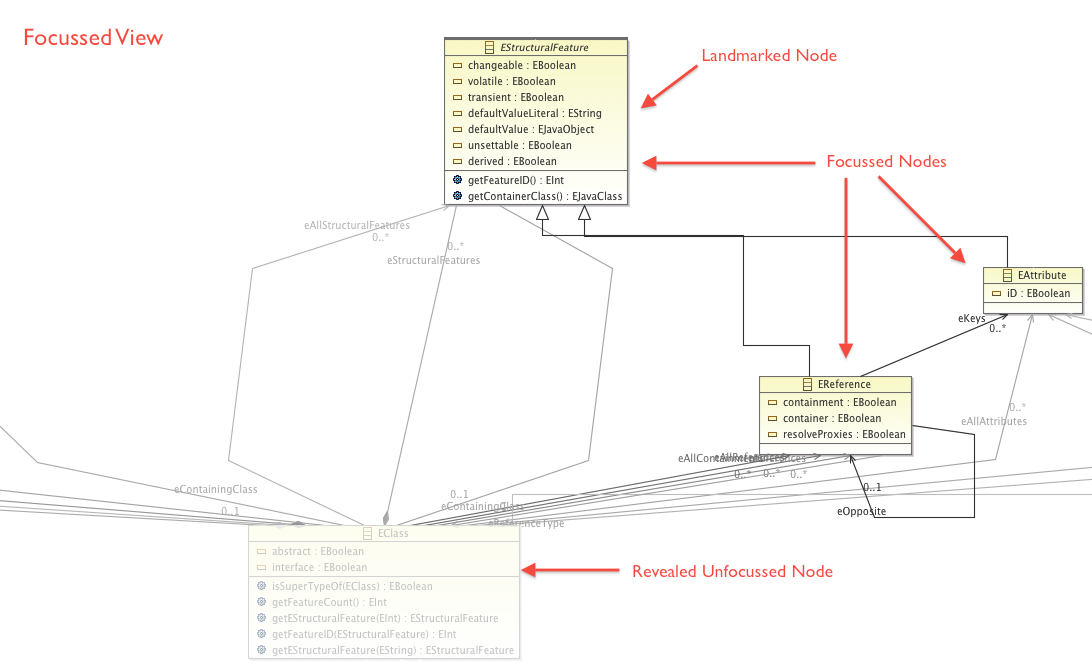 Focus Button in the toolbar will cause all model elements to be shown as they are in an non-Mylyn enable editor. 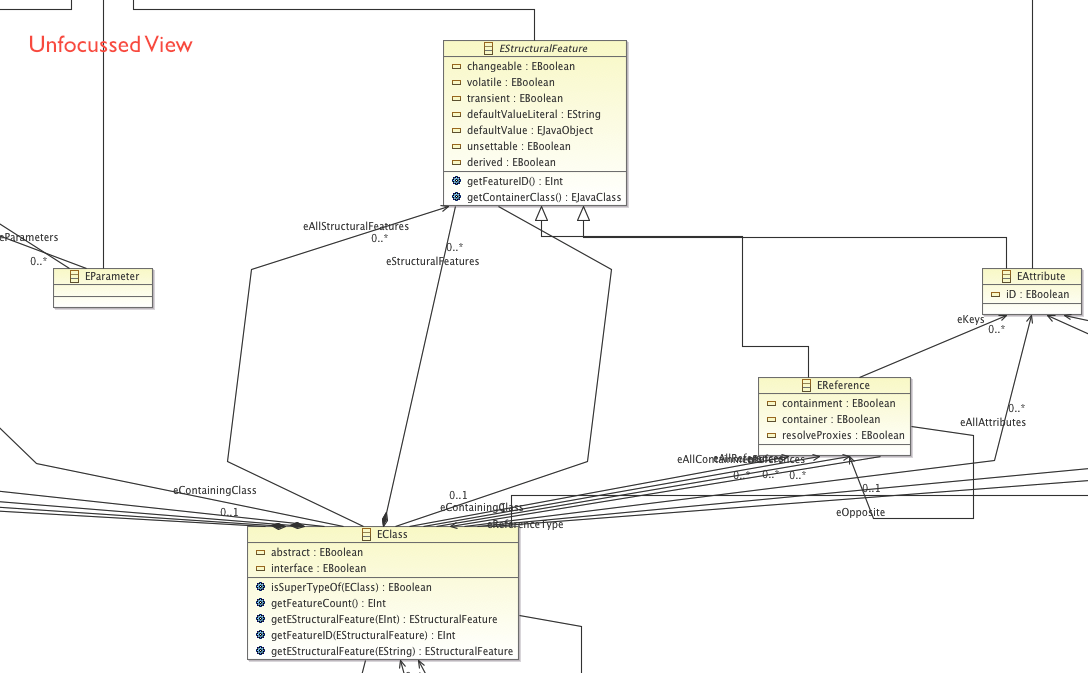 To landmark a node, right-click on it and select "Mark as Landmark". Remove an element using "Remove Model Element from Context". Remove the entire diagram from the active context by clicking "Remove from Context". 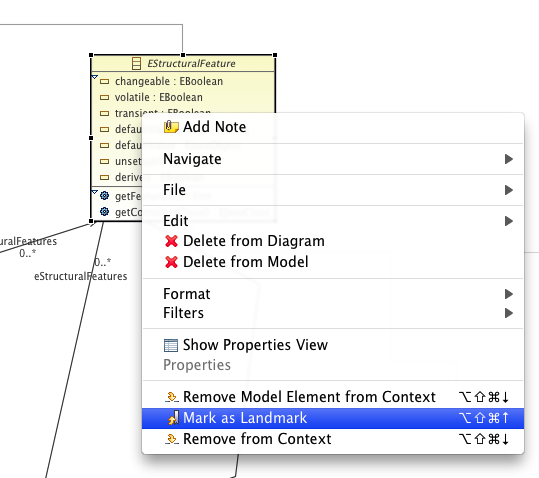 If you're working with EcoreTools or other supported EMF-based models you can also use "Alt-Click" in the Project Explorer to reveal and select nodes. This works for both model and diagram elements.

Tip: You can use the Outline View to help identify and navigate to the nodes you've revealed. 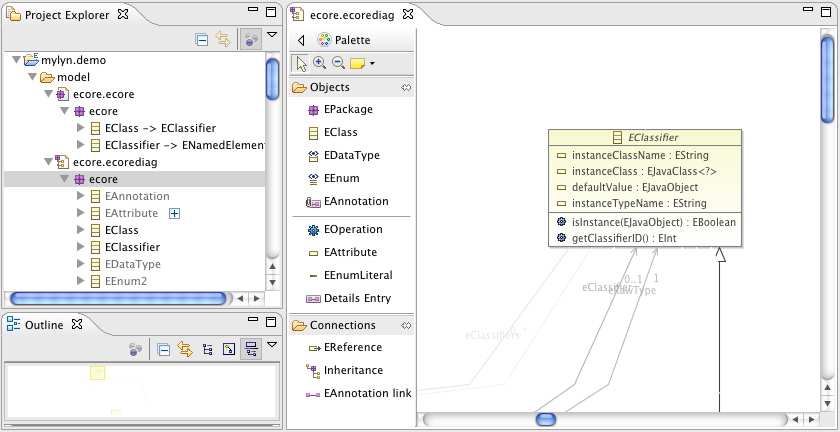 We've tried to design the modeling bridge so that it is easy to make your own GMF and other EMF-based editors and views Mylyn savvy. There are a number of artifacts to take care of but much of it is boiler-plate. (It would be straightforward to support this with a simple meta-model and code generation -- let us know if you'd like to participate in or support that effort!) And please let us know if you have any difficulties or improvements for the below steps.

Users aren't interested in the diagram objects, they're really interested in the underlying domain or model objects. In the Mylyn Java integration, for example, Java classes and methods are tracked, and then revealed in various ways in different editors. So for an EcoreTools model for example, we don't want or need to keep track of the diagram Node objects or any other reference in the various foo.gmf.. files for, we want the domain object itself, e.g. EClass, EPackage, etc.. in the corresponding foo.ecore resource. What we need to do is to define what the user might be interested (or not interested) in and then map that to the diagram editors and other editor types.

Rename files and other artifacts with the appropriate names. For example in your GMF "Foo" Diagram tool:

Here's where the non-boiler plate stuff is.

In FooStructureBridge, you'll define domain objects which should be managed by Mylyn. This is how it is implemented in UML2StructureBridge:

In FooUiBridge, you'll define diagrams and views which should be managed by Mylyn. In UML2UiBridge, the important bits are:

Below are some ideas for further improvements and extensions. Please feel free to add your own, and let us know if you'd like to contribute solutions to any of these.

It's quite easy to implement editors for other model types. It would be great to have more examples.

Code generation for Mylyn enabled GMF and EMF tree-based based editors. Ideally this would be completely transparent, but it's very likely we would need a project for each generated GMF model diagram. This isn't really an issue as generating code is part of the GMF diagram creation workflow anyway. This is actually a relatively simple plumbing task, as we already have good example projects to build tempaltes from.

The current approach works well for object collaborations that are already close together or that are composed of several related clusters. Our intuition is that this will generally be the case. To the extent that focussed nodes are spread out across the diagram, the current approach will be less effective. Note that the situation is still much better than without Mylyn as in the default case, you'd have to find the other nodes of interest amidst all of the other diagram clutter! There are a number of approaches we might take to this issue:

MFT can easily be extended to support other modelling tools. Third-party implementations include:

MFT Release Review has passed release review for 0.9.0. We've just released version 0.9.1, which improves support for Papyrus and contains other graphics related fixes and improvements to the extension mechanism.

This page was last modified 18:24, 26 February 2013 by Miles Parker. Based on work by Steffen Pingel, Benjamin Muskalla and David Green and others.