We need a mechanism to achieve these goals:

As we need to add links starting from elements of the composed metamodels without changing these metamodels, we need :

Our approach is to create, in a new metamodel (the composing metamodel), elements which could be interpreted as additional links between metaclasses of other metamodels (the composed metamodels). Because in the majority of cases, the referred models are conforms to meta-models that have not been designed to be referred. We then need a mechanism to add “virtual” references to the referred meta-models. We need a "virtual add" because referred meta-model can’t be modified in most use cases. And the use of bidirectional references is not recommended to avoid cycle problems.

In the meta-model presented on Figure 2, the class “Link” corresponds to the "link" concept (R2) and the LinkEnd is used to represent the "different arities" (R2.1). The LinkType class corresponds to the link typing (R6.2). The subLinks reference allows a link to have sub links (R2.3). 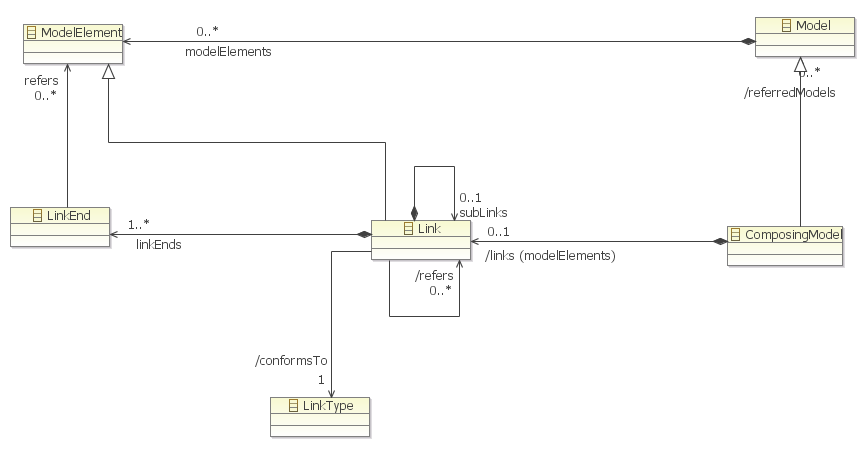 The Figure 3 presents the meta-model completed by the following items:

MoDisco is based on EMF. The composed model must then be implemented on the top of EMF. In this document we will assume that the EMF resource is the EMF implementation of the concept of model.

A link (or a LinkType) between to models (or meta-models) can be realized using an EClass containing EReferences referring linked meta-model’s EClass(es). (This also works for unary links.)

The capability for a resource to refer other resources is already provided by EMF and satisfies the non functional requirements.

The functional derived attributes are implemented in a utility class named: org.eclipse.gmt.modisco.infra.composition.CompositionUtils. This class contains the following methods:

The virtual add of reference is provided by the MoDisco facet feature.

To be able to satisfy the R10 "To be usable by transformation and generation engine based on EMF." non-functional requirement, a virtual EMF resource implementation integrating the MoDisco role feature is necessary. Thanks to this vitural resource, the requirement is satisfied for engines using the EMF reflexive API.

The class implementing this virtual resource is named: org.eclipse.gmt.modisco.infra.facet.MoDiscoVirtualResource.

When a composing model is loaded in a MoDisco virtual resource, the virtual resource needs to know which facet set to load. A dedicated Ecore annotation name is provided: "org.eclipse.gmt.modisco.infra.facet.default.facetset".