Historical Document: The model has graduated to Eclipse4 and continues to evolve there

This page is intended to capture ideas and keep reminders for E4 developers. The information here is a work-in-progress and might change.

When you add a comment, please add comments in-line with the [my name] tag at the start.

How things work together

To avoid duplication of information and questions on "which came first, the chicken or the egg?", we should keep the model static and use contexts to record state information.

Example: active part. There was a bug where model would change the active tab in the CTabFolder and send events. Event processing used context to get active part. Context was updated after the CTabFolder change. The fun result: commands were applied not to the currently selected editor, but to the previous editor.

I like Eric's approach: persisted properties go in the model, non-persisted in the context.

[Eric] I'd be all for calling the current 'MPart' a 'View' and having what we currently think of as an 'Editor' be a 'View' with an 'Input'. Since we introduced savable and multi-instance views the only real remaining differences are containment restrictions (Editors and Views go into different stacks) and the extra mechanisms we allow for mapping resources onto editors.

[Eric] All the names should be revisited, starting with removing the 'M' (I know I drove this change but, hey, I was wrong to trash the naming just to make the coding easier...;-). As far as 'MSash' goes perhaps it'd be better as 'MTiled'. The 'sash' is really an implementation detail, the real difference between an MStack and an MTile is that one only shows a single child at a time while the other shows them all.

[Eric] I agree...the current separation of the models causes more problems than it solves. I'd also prefer to see a single model with basic and advanced (IDE) components. 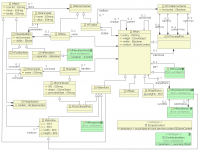 The selection currently follows active child. This is not always correct: For instance, when we click on a tab containing property view, that tab becomes active with null selection. However, the property view is really interested in the object that was selected in the previously active view, such as Project Explorer.

[Eric] Agreed, I've been working (very part-time) on one of these for 2 months...Moreover I think that having the tooling to visualize and manipulate all three of our models (UI Mode, Context, CSS) is really important, it's our proof that we know what we have and how it works. Also, the implementation of these views will be a direct reflection of the complexity of the underlying model; if we find it hard to keep these views in synch with ongoing changes it's a sign that we're going in the wrong direction (i.e. the current UI Model Editor is < 1000 lines of java...if it starts to get a bunch of funky if statements and switches it's likely that we're making the actual model overly complex).

We'll need to either define an Object NOT_A_VALUE or add a method "isSet()" to differentiate between cases where variable is set to null or not set.

Consider model viewer: A tree-like view with model elements that passes its selection to the specialized properties view. Ideally, if that properties view is dragged somewhere else in the E4 model we'd still like to receive selection from that original model viewer. This means that we need to be able to establish "links" that would survive changes of the context tree.

Command and Menu Contributions and other Framework Services

[Paul] In 3.x, this encompasses both commands/handlers/menu and toolbar contributions and the supporting services:

[Paul] It seems a part placeholder would be an MCP that's not visible or restored or open. For stacks, just a comment that we've had requests for both behaviours (empty stacks disappear and empty stacks sit there, empty).

For example here's a possible state diagram for an application:

If we allow clients to place code between the states (i.e. 'Pre Workspace Init' or 'Post Model Init'...) then they have logical slots for most tweaks, additions...

I think it'd be a good idea to actually have the code reflect that this is a state machine, allowing for the addition of new states and or replacement of the default implementation of a particular state.

Please see the E4/Event Processing for the current state of development.

[Oleg] Update: All of those are really what's described by the "publish/subscribe" models. There are tons of them with different degrees of sophistication, from relatively simple OSGi's Event Admin to Java's Java Message Service to full enterprise implementations of "Advanced Message Queuing Protocol". Personally, I think that we need to stick with the most trivial (and performant) approach we can find: it just has to be good enough for Eclipse needs.

The following are defects that contain at least some discussion about architectural issues or suggestions on future direction:

This page was last modified 11:34, 20 June 2014 by Paul Webster. Based on work by Oleg Besedin, Hallvard Tr and Eric Moffatt.