This category contains Scout hierarchical graph images. They show hierarchical relations between the scout concepts. The are similar to the class or interface hierarchy graph, but they focus on the concepts developed in the wiki and not on the code.

Each node stands for a concept developed in this wiki. An edge from A to B indicates that B is a specific sub-concept of A.

There is one graph for each concept (this concept appears in red). In one graph not all concepts are represented (in order to keep the graph readable).

These graphs are generated with dot. The source code (dot) is provided in each image description.

IPageWithNodes ) is a specific type of Page (interface

IPage ). Therefore there is an edge from NodePage to Page. 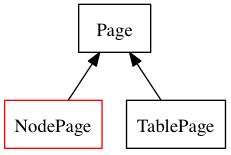 This can also be seen in the java code in the interface declaration:

The following 5 files are in this category, out of 5 total.