This page is currently under work in progress. Not all concepts and definitions have already been verified with the relevant teams within the BaSys project. Please use the information provided by below with care. All definitions on this page will be added to the Glossary, as soon as they have been verified.

The aim of this page is to provide an precisely defined vocabulary, which can be used in architectural discussions, studies and for modeling data structures in software components, such as submodels of asset administration shells.

In this section, a general taxnomy of different kinds of of components. An overview over the concepts and their relationships is presented in the figure. 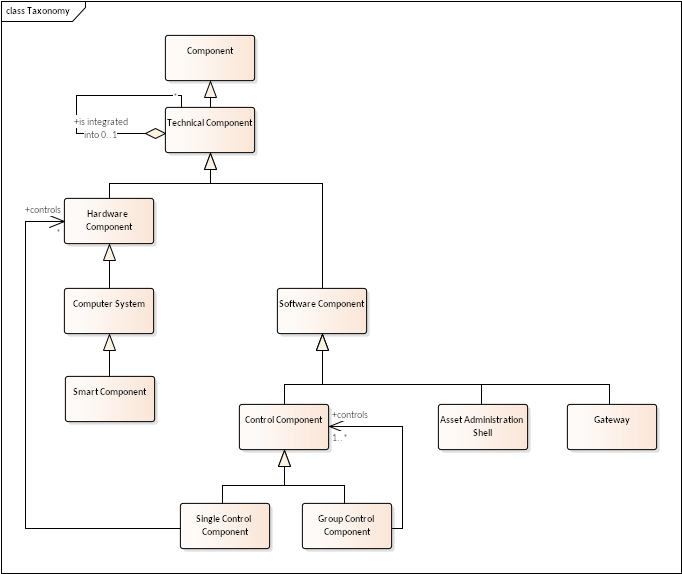 Components are a common concept across many different fields of interest. According to the Cambridge Dictionary[1], a component is “a part that combines with other parts to form something bigger”. In the field of industrial automation, the word “component” typically refers to the concept of technical components.

technical component
prefabricated entity with inner structure, that is designated to fulfill one or more roles within a technical system and may be handled as an independent unit during its period of usage

This definition is based on the definition of “Technische Komponente” in the german DIN SPEC 40912[2] and the BaSys whitepaper D-PC2.4[3], yet augments it with the term “ may be handled as an independent unit during its period of usage”. Thus, all technical components (hardware and software) need to be able to be handled as an independent entity. Typically, this includes the identifiability, persistence and isolation of the component, the identifiability of external dependencies, and, in most cases, the compactness and disjointness of the component[3].

However, we only expect the component to fulfill these requirements during its usage period. It may for example be entangled with other components during development and production, but still be called a “component”.

“handling” a component includes all tasks required for setting up and using the component:

to handle (a technical component)
to install, remove, change position of, configure, activate or deactivate one or more technical devices within a technical plant

In this context, “software” is defined as follows:

This definition of software describes the physical manifestation of a piece of software, which should be distinguished from the concept of software as abstract information (as defined in the IEV[4] for example).

Technical components may be aggregated, such that one or more components are integrated into another one with the following semantics:

to integrate (a component) into
to link a component A with another component B in such a way that, henceforth, A is contained in B and will be handled as unit collectively with B

A may still be handled independently in this relationship and may continue to exist without B. The integration of hardware components within each other is realized by installing them within the outer component, i.e. creating mechanical connections (bolting etc.) and connecting all required interfaces for material, energy, and information transport.

The figure shows an example of some aggregated components from the BaSys 4.0 final demonstrator. For the example, we assume, the plant in the demonstrator simulation would have been physically constructed. Furthermore, we assume that each belt conveyors has an integrated PLC running the single control component for that conveyor, whereas the crane and the pick‘n‘place robots are controlled by a central computer running the ACPLT/RTE software.

All the components shown in the figure are concrete component instances (not types or roles – they are introduced below). The links between them represent physical integration: The belt conveyor‘s PLC is located within the belt conveyor; the robot control component RB-SCC V1.0 … is located at a defined memory location of the ACPLT/RTE database. As one can see in the figure, the crane‘s control component is not integrated wit the crane itself (in the sense of collective handling of the components).

In this section, the relation of components, component types and roles is presented, as well as the concept of composite components. Again, an overview of the concepts is shown in the figure. 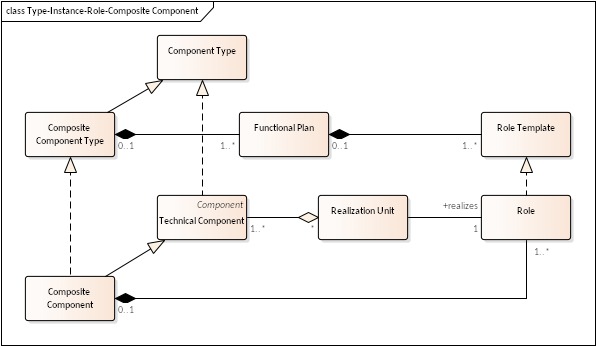 Technical components, which are part of technical system (or integrated into another component), carry out different functions to make the overall system (resp. the outer component) work. This means that these functions fulfill tasks defined by the outer system, which we call “roles”:

A role defines the requirements for components to fulfill this role, especially for their capabilities and properties as well as for the kind and characteristics of their interfaces. Roles are typically defined by functional plans of a system or component type.

However, a functional plan does not actually contain the roles, since it is only an abstract document describing how the system or component will work, as soon as it has physically been constructed. Nevertheless, a plan describes all the requirements and properties that will later hold for the concrete roles. Thus, we call those descriptions “role templates”:

role template
Description of a role in a functional plan

Role templates are abstract; i.e. they do not correspond to a concrete task to fulfill. For each realization implemented/built according to the plans (e.g. construction of a system that follows the plan) a role is created as an instance of each role template. These roles can be fulfilled by concrete components. For example, a given type of industrial robots (= component type) need to include a frequency inverter with certain specifications (= role template in the electrical plan of the robot type). When a robot of this type is manufactured, it requires an inverter with certain specifications according to the role template (= role); so a inverter (= component) is installed to fulfill this role.

Roles may also be defined by a greater context, e.g. based on management decisions in a company. In this case they are not necessarily an instance of a role template attached to a functional plan.

To fulfill a role, one or more technical components may be used. We call those components the “realization unit” of the role:

This is an abstract term: Components of a single realization set may be spread across different location and may not necessarily form a single component (that can be handled independently). Conversely, a component may be part of more than one realization units, if it fulfills different roles in the system.

Composite components are a special kind of aggregated components:

From the example above we can now define realization units, independently from the aggregation of components. To fulfill the role “CR01”, which describes the function of a fully operational crane, a crane (in this case the crane Crane X01) and a corresponding single control component CR-SCC V1.0 on the central computer (which has been instantiated at memory location 0xdeadbeef) are required. Together, they form the realization unit of the role CR01. 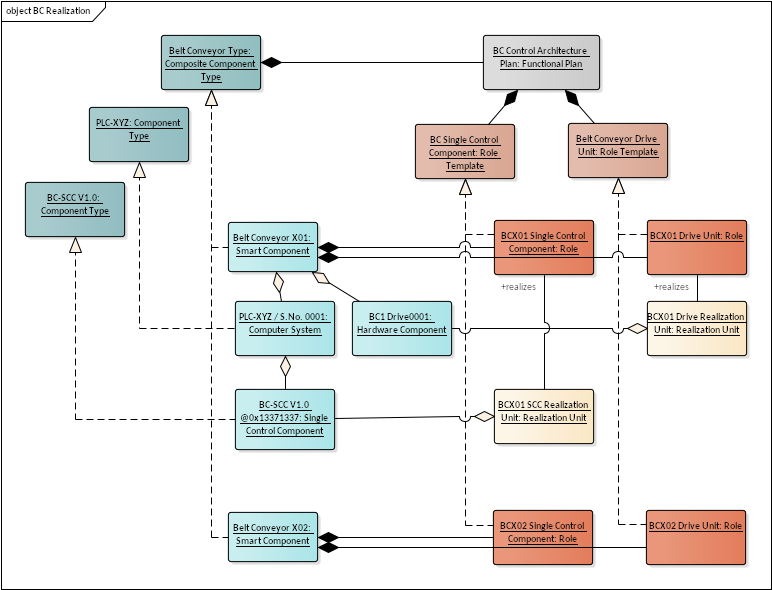 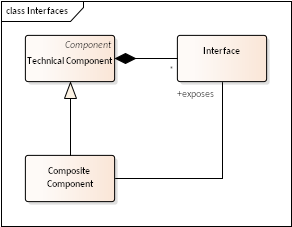 Interface
item within a component that enables the component to exchange matter, energy, and/or information with the surrounding system or other components, while specifying the form and properties of the matter/energy/information as well as the technical properties of that item as accurate as required

Interfaces are the only possibility for a component to exchange matter/energy/information with its surrounding world. Software components may only have information interfaces. 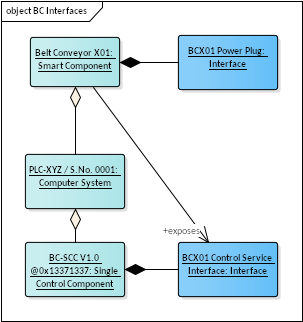