Difference between revisions of "Xtext/Contributor Guide"

We use eclipse eclipse gerrit review server to review and manage new contributions. You need to perform the following few steps to be able to use the Gerrit server:

The Xtext team uses Oomph to setup the developer environment. Download The Oomph installer and start it. 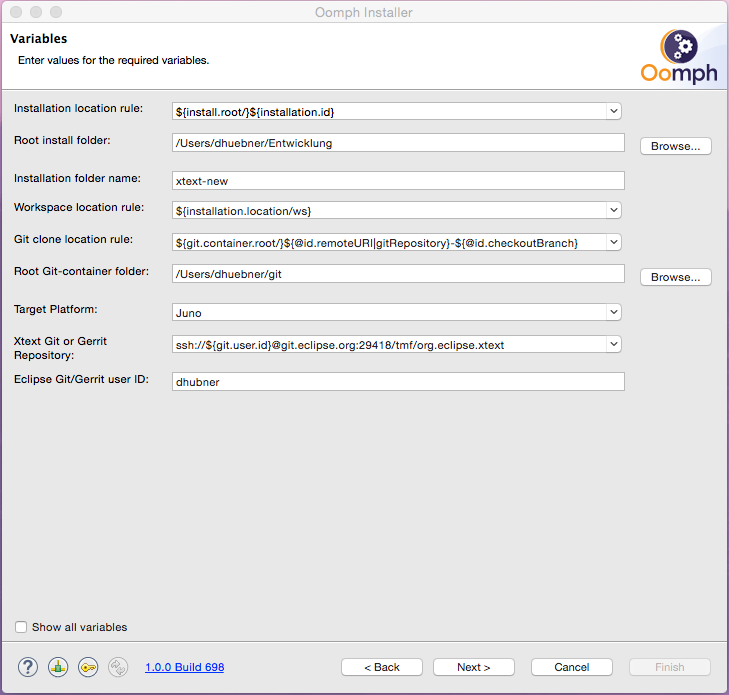 Now you can complete the installation wizard with the Finish button.

First Oomph will create a new eclipse installation for you. Downloading required files may take a while. You can close the Oomph installer after your fresh eclipse installation starts. In the started eclipse, you will see a startup tasks execution running. Initially it may take a while because it clones the Xtext git repository. In order to see the setup progress details, click the icon left to "Executing startup tasks" in the status bar. Wait for the setup to complete and restart Eclipse when prompted.

After initial setup is done, you should check which version of JDK is used for the JavaSE-1.6 execution environment. Go to Eclipse preferences -> Java -> Installed JREs -> Execution Environments. Select JavaSE-1.6 and set a compatible JRE to Java less than 1.8. Clean build the workspace after changing this setting. 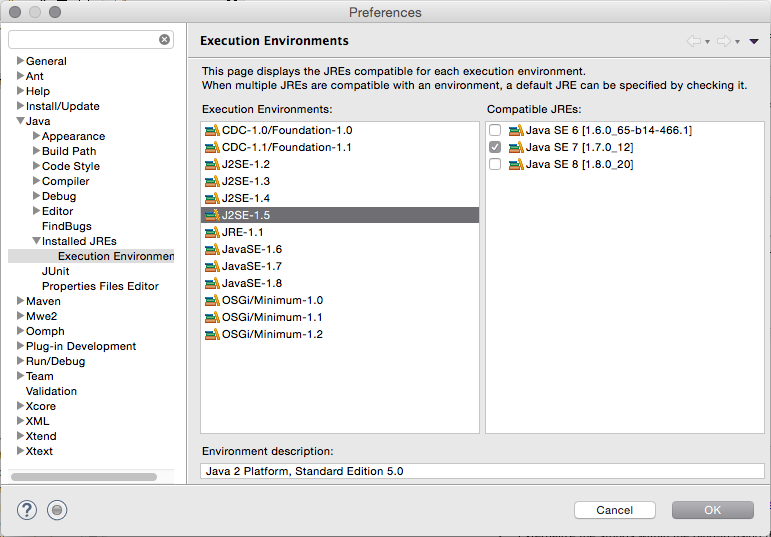 If you have followed the recommendations in the section above, the Oomph installer has already configured your local repository to push changes to the Xtext Gerrit repository. To contribute your changes, commit them using Team -> Commit and finally, if you feel ready to push, push them to the remote Gerrit server using Team -> Remote -> Push to Gerrit.

After you have pushed your first commit to Gerrit, it will be reviewed on the hudson review server. If all tests pass, a manual review will be done by one of the Xtext committers. If everything looks good, your contribution will be pushed to the master repository and you can install it from the regular eclipse hudson server.

Xtext and Xtend are hosted in git. You can browse the repository in cgit here Xtext/Xtend repository.

You may use whatever git client you like. The important thing is that finally your local git configuration should look similar to this:

You can find the configuration file (called "config") in the root of your local repository, in the hidden folder ".git".

Pulling Changes from the Server

To fetch the last changes run:

After you made your changes to the source code, you have to commit them locally:

-a performs 'add' and 'remove' operations to modified and removed files (new files git does not know about won't be affected)
-s is necessary to 'sign-off' your commit; refer to section User Account to make sure you signed the CLA!
-m stands for message. It's common to refer to an existing bug report, in this example 390852, in your commit message
Now if you call git status, you will see one outgoing change:

After you committed the changes to the local git repository, you can push them to Gerrit by running

In case a patch has problems and you want to provide an updated patch, you need to